A Certain Middle-High School (とある中高一貫校, Toaruchukoikkan?) is a currently unnamed, combined middle and high school located in Academy City's School District 7, where Kamijou Touma and his classmates went after A Certain High School was heavily damaged and rendered unusable.[1]

The student council is apparently comprised of around ten boys and girls, with a ratio of about 2:8.[2] The student council president is Keshouin Asuka, aka Jumpy Bunny, however in the name and process of helping out Asuka, Akikawa Mie has effectively taken over the council without realizing it.[4]

On December 4th, after A Certain High School was left unusable by the damage caused by the High Priest the previous day, the students and staff moved to the nearby combined middle and high school, borrowing the unused facilities to continue lessons until their school could be repaired. Kamisato Kakeru also transferred to the school.[5][6][2][7][8]

During the abnormal December heat wave, the school was used as a shelter by students and staff, both from the heat and the Elements which were loose in the city. On December 7th, with the water situation still bad despite several water hunts and the possibility of trouble for the extra students, members of the student council proposed a plan for a group of them to acquire water purification microbes from the district's water department, in order to purify the pool water and make it safe for drinking. Touma's group agreed to carry out this plan,[4] setting out early the next morning. They succeeded in obtaining cultivation samples containing microbes, but were attacked by Elements, resulting in Touma being separated from the group.[9] 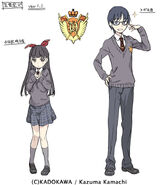