Amai Ao (天井 亜雄, Amai Ao?) is a minor antagonist in the Toaru Majutsu no Index series. Originally a researcher of the First Production Plan of the Radio Noise project to develop military clones of Misaka Mikoto, he was later brought back into the project after it was reused for the Level 6 Shift experiment.

He was a researcher during the First Production Plan of the Radio Noise project and specialized in creating personality data with self-learning capabilities, however, he was soon relieved of his duties after it was discovered there was a flaw in the plan. Ao was later called back after the project was reused for the Level 6 Shift experiment, and was tasked to direct the experiments. During the experiments, Ao invested greatly on the project, hoping for a return of his investment after the experiment has been concluded.

He appears in the Sisters Arc in the Toaru Kagaku no Railgun sidestory, where he objects to the manager of the project for distributing the experiment to various facilities. Ao worries about the interests of the project being split-up, but is calmed by the manager after he explains to him that those who will receive gains from the experiment are the one who are still running it at the time of the project's completion. He leaves his office shortly therafter.[2]

After Touma defeats Accelerator and ending the experiment, Ao becomes heavily indebted due to investing on the project and plans to move to a rival organization outside of Academy City. He later implants a virus into Last Order a few days after the end of the project, which would order the clones under the command of Last Order to attack people.

Amai Ao is later seen by Accelerator outside of Julian Restaurant (different restaurant in the manga adaptation)[3] entering his car, noticing his gaze Ao immediately goes drives his car to flee.[4] However, Ao later returns to the restaurant to retrieve Last Order, who is already weakened being outside of her incubation tank too early and having the virus ready to activate. Ao takes her to the now-abandoned Radio Noise Research Facility[5], as he has nowhere to go since traffic in-and-out of Academy City has been limited since someone has breached the city's security.

Accelerator tries to attack Ao, though fails as he loses consciousness due to the gunshot. Seeing Accelerator fall, Ao tries to shoot Accelerator again but is shot by Yoshikawa Kikyou in the back who just arrived. Ao is visibly suprised by Kikyou's intervention, as he states that her personality of wieghing risks and opportunities should've prevented her from doing this. Kikyou tells him that she is aware of that, and says that she really didn't want to be a researcher but a teacher, Kikyou berates Ao for attacking children, both of them pulls their gun out on each other. Ao comments that what she is displaying is not kindness but strength, at which point both them shoot each other at the same time. Ao dies, though Kikyou is saved by Heaven Canceler, who says Accelerator used his vector powers to prevent any blood spilling from Kikyou's arteries that were ruptured by Ao's gunshot.[7] 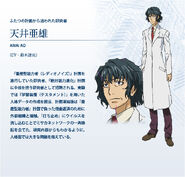 Retrieved from "https://toarumajutsunoindex.fandom.com/wiki/Amai_Ao?oldid=25125"
Community content is available under CC-BY-SA unless otherwise noted.