He looks completely similar to the true Aureolus Izzard, with a neatly combed dyed green hair representing the element of Earth. As well as wearing a white jacket on a purple shirt with a pink tie, and Italian shoes. He is also described as 18 years old, despite his apparent middle-aged look.

Needless to say the dummy looks as dapper as the true Aureolus Izzard.[1]

The dummy is shown to have callous disregard for human life, using the students of Misawa Cram School as materials as adjustments for his Limen Magna ability, similar to the real Aureolus Izzard. Unlike the true Aureolus Izzard however, the dummy easily gets angered when confronted, and this is shown quite clearly in his speech pattern, which uses profanities more liberally than the real Aureolus.[2]

Touma notes that the dummy's personality during his distraught ramblings of his lost purpose in life and utter desire to fill it is similar to the true Aureolus' personality upon finding out Touma has already saved Index. Here, the narrative states that Touma believes that the dummy portrayed Aureolus' true character.[3]

Created by Aureolus Izzard using basic materials and a Germanic Cross to create a soul, as an apparent deterrent for intruders who survive the onslaught in the Misawa Cram School and its inhabitants who still seek him.

The Aureolus Dummy believes himself to be the true Aureolus Izzard despite the errors in his logic. Here, the dummy believes that his Limen Magna ability (which he believes he created) is the epitome of alchemy, even though it has the same effect over regardless of use, despite the fact that he calls himself an alchemist (which is still a magician), the main point being magic is all about continued experimentation and research for new discoveries. Furthermore, the dummy's main goal is to find a way for humans to transcend themselves without losing their humanity, despite wanting to search for vampires even though they are above humanity. Regardless, the dummy is completely oblivious to these contradictions in his thoughts.[4]

It is unknown if he has similar motivations to the real Aureolus, finding a way to save Index regardless of cost.

The dummy first appears before Stiyl Magnus after he burns down the core that controls the simultaneous chanting of the Aureolus' Gregorian Chant Replica. Here, he introduced himself to Stiyl as Aureolus Izzard. However, Stiyl completely disregards him even after attacking him several times with his Limen Magna. Here, Stiyl reveals to him that he is merely a dummy made by the true Aureolus Izzard, and reveals the flaw of the dummy's reasoning of his goal of achieving a higher state for humans without losing their humanity, if he uses vampires who are beings that surpass humanity. With his world view collapsed, Stiyl uses it to his advantage, attacking him with his magic and managing to hack the dummy's limbs off. The dummy goes mad afterwards and starts attacking randomly, and manages to flee from Stiyl during his short outburst of madness.[4]

The dummy later uses his Limen Magna to create makeshift limbs. The dummy afterwards meet Touma and Himegami Aisa just after saving an esper. Here, Touma confronts him after witnessing what he did to the students in the school with his Limen Magna. Predictably, Touma manages to negate Limen Magna, much to the dummy's surprise. Seeing the ineffectiveness of his attacks on Touma, the dummy then uses Limen Magna on Aisa who is saved by the girl she and Touma saved a while back, turning her into gold. Completely livid at this sight, Touma tries to draw the dummy in, and later corners him, forcing the dummy to retreat. Touma does not relent and pursues him after escaping. Despite the dummy's best efforts in fending off Touma using his Limen Magna, Touma manages to land successful blows on the dummy, both with his right hand and head.[5]

Still completely enraged, the dummy experiences one of the rare instances that Touma tries to seriously injure an opponent beyond necessity. Here, Touma uses his left hand to grab the chain that the dummy uses for his Limen Magna and uses it to strangle the dummy. The dummy then pleads for his life to Touma, who later acquised after seeing what he has done. Letting the dummy go, nearly half dead and heavily injured.[5]

After getting away from Touma, the dummy realizes that Touma and his right hand was the answer he was looking for, humans achieving a higher state without losing their humanity. Immediately after this, Stiyl arrives and questions him about the dead Roman Catholic Knight in the main lobby, where he learns that the dummy did not kill the knight. Stiyl states that he has arrived to give him his final blessings, as he is slowly dying due to the effects of Imagine Breaker and his injuries. After the dummy declines for a final prayer, Stiyl incinerates his body.[2]

The dummy is later seen, apparently still alive after Index enters the Misawa Cram School building and realizes that there is a seal in place in the building. Here, the dummy is barely recognizable, having been burned and slowly disintegrating, his appearance is beyond recognition. Here, he surprises Index but is finally taken out of his misery by the arrival of the true Aureolus Izzard who crushes the dummy's body through the use of his Ars Magna.[6]

For Limen Magna in relation to Alchemy as a whole, see Alchemy#Limen Magna.

Aureolus Dummy's only ability is to turn physical objects into molten gold, called Limen Magna (, Shunkan Rensei (Rimen Maguna)?, lit. "Instant Alchemy") which the dummy boasts as the pinnacle of alchemy, and according to the dummy, the Bohemian and Viennan alchemic schools of thought believed that it could not be fulfilled.[5]

Using a dart on a chain that he hides within his sleeves, he propels the chain in order to hit the target with said dart. When the dart hits an object, it instantly turns it into molten gold.[4] His Limen Magna, in actuality, is the entire Misawa Cram School which the true Aureolus Izzard turned into a base. This allows the dummy to recreate the tool that he uses to convert things into gold to as many times as he wants, and as long as the main body is supplied with mana and the shape of the tool is recreated, he can use it again.[2] Furthermore, the dummy can use Limen Magna on his own body, and can apparently use it as a makeshift prosthesis, although he is not immune to the molten gold's effects.[5]

Naturally, the Imagine Breaker is immune to the effects of Limen Magna, much to the dummy's surprise and intrigue. Moreover, the dummy is unsure whether formless objects such as flames can be turned into gold.[5]

While Dummy's body itself is "as fragile" as a human body and can be easily be chopped into pieces by a fire sword [4], we have that just like Limen Magna; his body operates by receiving mana from Misawa Cram School, in other words in the same vein as high level spells we have that Aureolus Dummy can't be instantly erased by the Imagine Breaker if it is used in him, but instead he will lose energy gradually for long before vanishing.[2] It should also be noted that Aureolus Dummy can still move even after his whole body has exploded from the inside out.[6]

Aureolus pointed out that Limen Magna will immediately vanish if the whole mana supply of the building is exhausted, otherwise it can be immediately reconstructed if so is desired by using available mana from the building,[2] considering that his existence is similar in nature to Limen Magna it might not incorrect to assume the same about him.[2]

Based on Aureolus Izzard's design, the dummy's most distinguishing feature that Haimura introduced is his facial expression.[7] 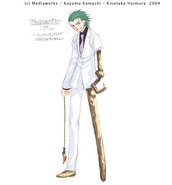 Design of Aureolus' clone after being injured by Stiyl, including height, by Haimura Kiyotaka for Volume 2.

Design for Aureolus Dummy's Limen Magna dart by Haimura Kiyotaka for Volume 2.
Add a photo to this gallery

Retrieved from "https://toarumajutsunoindex.fandom.com/wiki/Aureolus_Dummy?oldid=205823"
Community content is available under CC-BY-SA unless otherwise noted.