Baba Yoshio (馬場 芳郎, Baba Yoshio?) is a character introduced in the Toaru Majutsu no Index series. As an operative of MEMBER, he is a hacker and an expert in robotics and information gathering. Initially a minor character in his debut in the original light novel, his role in the story is expanded in Toaru Kagaku no Railgun.

Yoshio appears as a chubby young man with brown hair. He normally wears khaki trousers and a blue sweater vest over a white shirt. In Toaru Majutsu no Index III, he is much thinner in appearance and stands in contrast with his Toaru Kagaku no Railgun T appearance.

Baba Yoshio is a young man who is confident that through the use of information, knowledge, and technology any esper can be taken down no matter what kind of power they have. And though he is aware of the capabilities of an esper's powers, he underestimates them as well, as shown when he underestimates the full extent of Kongou Mitsuko's ability, necessitating for him to use a hostage against her.[1] Yoshio is also confident on himself not relying in others, believing that it makes one weak.[2] According to Wannai Kinuho, his scorn for trust and relationships comes from not having anyone trust in him, and that it is the result of looking down on others and closing his heart to them.[3]

He is cruel and merciless against his enemies, most especially those whom he believes has looked down on him or embarrassed him.[3]

Seemingly not learning his lesson from the Daihaseisai, Yoshio hides away in an emergency shelter alone known as the Summer Resort, a remarkable contrast to the field work in Toaru Kagaku no Railgun. Using his Type: Great Danes, he provides support for the Professor during the conflicts of the underground organizations of Academy City on October 9.[4]

He first "appears" immediately after the assassination attempt of Oyafune Monaka. With his Type: Great Dane, he informs the Professor that SCHOOL and GROUP has made their move. The Professor asks Yoshio if they have made contact yet, to which Yoshio says that GROUP has failed at capturing them, and that it is currently unknown whether they can catch up to them. Hearing this, the Professor concludes that the other organization has made their moved as well. The Professor states that from the start organizations like them have reasons for their complex behavior, being repressed by the powers at the top and were subject to control. However, the Professor states that because of the riots that rose along with the 0930 incident, the majority of the Powered Suits were sent out to mop-up at Avignon. The Professor then says that it is a big opportunity for them as the suits cannot be used freely. Saraku then appears and asks if the opportune time will be soon, to which the Professor confirms. Xochitl then asks how the Professor could predict the other organization's movements even though the information from the higher-ups might be incorrect, to which the Professor says is because the trop brass possess the technology to make that possible (most likely referring to UNDER_LINE). After the Professor sees Tsuchimikado Maika ride a cleaning robot, he becomes seriously impressed. Yoshio then says that the Professor should refrain from thinking of strange ideas.[5]

His Type: Great Dane later accompanies the Professor to School District 4 in his own attack against Kakine Teitoku of SCHOOL in order to retrieve the Tweezers his organization, SCHOOL, stole from the Elementary Particle Engineering Laboratory. Believing that he has killed Kakine with his Mimosa, the Professor talks to Yoshio on the reason why he loves formulas and why he is part of MEMBER. Unfortunately, he is not the only one to hear this, as Kakine remains alive after being attacked by his Mimosa. As the Mimosa has been blown away, the Professor is killed by Kakine and Yoshio bears witness to this.[6]

Seeing that the Professor has died, Yoshio makes plans to leave the Summer Resort for his enemies will soon find out his location. He later discovers that the exit elevator will not work, as well as the fact that he cannot open the door to the stairs. At that moment the lights in the shelter turned bright, to which Yoshio discovers that the shelter has been put into lockdown for security reasons. He later hears water behind the walls. Believing that his shelter has been flooded, Yoshio discovers that he cannot escape on his own. Since the Professor is dead and Saraku is indisposed after his fight with Accelerator, Yoshio e-mails the only other functioning operative of MEMBER, Xochitl. However, she crushes his hopes by saying that since the information he collects on the organizations is stored in different servers for each organization, she doesn't need him to pursue her enemy and she doesn't have time to clean up her mess. This of course angers Yoshio but he has no time to complain. He invites the idea of laying down his pride and asking grunts from their subordinate organization or from the Person on the phone, but discovers that the communications cable had been physically severed. Now he can no longer get new information. And thus he was trapped, and though he was in the safest place in the world where he had enough food and oxygen to last him for an entire year, Yoshio succumbs to despair and his thoughts are later overtaken by his imagination.[4]

He later reports his ordeal to Mitori, and asks her for a safe place to hide from Mikoto's wrath.[3]

Although he doesn't display any esper abilities nor is a capable fighter himself, he is a good tactician, able to analyze the abilities of his opponents easily and change tactics when he needs to in spite of lack of information. He however is much comfortable if he has information beforehand, believing that it will allow him not to lose.[3]

Yoshio is an expert in machinery, and prefers to fight using the animal-shaped robots that he has under his control. He uses these to obtain information from a distance, to communicate with others, or to eliminate threats without staining his hands. Among his robots are the following:

Originally referred to as Dog-type robot (犬型のロボット, Inu-gata no robotto?) in the original novel, it is later named as Type: Great Dane (タイプ：グレートデーン, Taipu: Gurēto Dēn?) or T: GD is a silver-colored robot that is in the form of a Great Dane, though in the original novel is is described as being close to looking from the carnivorous cat family. It was a four-legged robot that was created using titanium alloy and synthetic resins.[5] It had an unnaturally long "nose" like an elephant.[5] This trunk can act like an arm, and is powerful enough to break rock.[1] It can also act as a vacuum to suck in things like water.[2] Also, because it had a guide robot dog walking program installed, it was surprisingly flexible in adapting itself to human society.[5]

Primarily used for investigation,[3] it is is equipped with communication devices to allow a person to speak with him through the robot. Yoshio has these types of robots connected to an overhead display, which allows him to receive audiovisual information from the unit itself.[1] In battle, it is used by Yoshio often in numbers, and fights by ramming itself into the enemy.[1] It has powerful legs allowing it to jump a fair distance and outrun a middle schooler.[2]

Type: Mosquito (タイプ:モスキート, Taipu: Mosukīto?) - Also known as T: MQ, is a mosquito shaped nano-device. It is a more expensive robot under Baba's arsenal. Due to its size, Type: Mosquito is more often used in conditions wherein being detected is not recommended, like in ambushing desired targets. This robot can inject drugs into its target, including one that can render a person unconscious as well giving them a fever by using its minuscule mosquito needle.[1] Moreover, it can also be used as a surveillance device as it has a camera and microphone.[2] It needs lift to to fly, as such strong winds[1] or differences in bouyancy can hinder it.

Type: Mantis (タイプ:マンティス, Taipu: Mantisu?), also known as T: MT, is a large robot that is based on the shape of a praying mantis, and is seemingly designed for combat situations. A few meters tall and several meters long, the Type: Mantis is the largest robot in Yoshio's arsenal. It has large pincers that are either used to attack its targets or grab them. It's feet are padded and flat, seemingly allowing it to slide on a smooth surface. Due to it standing out too much, only a single unit is stored in the back of Yoshio's truck and is rarely used. It also has surveillance devices, allowing for Yoshio to see and hear what's happening.[3]

The body of the Type: Mantis was apparently remodelled and used in the FIVE_Over Modelcase_"RAILGUN".[11]

Baba Yoshio's design remains static throughout the series, and is described by Haimura as a rare type of design in the series.

For Yoshio's robots were accidentally designed to look like dogs because of Haimura misreading the text.

Design of Baba Yoshio's robot for Volume 15, by Haimura Kiyotaka. 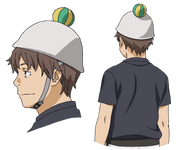 Retrieved from "https://toarumajutsunoindex.fandom.com/wiki/Baba_Yoshio?oldid=243252"
Community content is available under CC-BY-SA unless otherwise noted.