Imaginary Fest (story mode only)
Biagio Busoni (ビアージオ＝ブゾーニ, Biājio Buzōni?) is the antagonist of Volume 11. His rank is that of a Bishop, which has the power to command 1000 soldiers for his project.

He is a ruthless man who sees the glory of the Roman Catholic Church as everything, willing to sacrifice the lives of everyone on the guardian armada in order to preserve its name.[2]

He was assigned to be the overseer of the project to remodel the "Queen of Adriatic Sea," originally a weapon that could only target Venice, into a weapon that can be used anywhere, namely Academy City.[3] As of Volume 14, he's captured after the events of Volume 11 and is locked up in the London Tower along with Lidvia Lorenzetti.[1]

He is later visited by Stiyl Magnus and Agnese Sanctis for interrogation. Here, he has been sleep deprived and his skin and hair has lost its sheen and now just looks cracked and dried. Regardless, his supreme arrogance still seeps through his weary visage and defies Stiyl and Agnese's presence, telling Stiyl to bring out the famous torture . He glares at Stiyl which makes Agnese shudder for she was under him and that she did him wrong, though Biagio makes no regard of her. But Biagio is not the only arrogant one, as Stiyl tells him not to underestimate Necessarius, for there are many ways to get information from them without having them alive.[1]

Lidvia then tells Stiyl that they too do not care for trivial things such as that as well, but asks what is happening outside. To which Stiyl says that she can make a guess on what was happening outside. Lidvia's expression faltered, as she cared for the weak as there were the ones Lidvia reached out to. However, Biagio can only give a harrumph at the situation. Lidvia then says something which shocks and then irritates Biagio, have everyone in the tower released in exchange for what she knows.[1]

Ever defiant, only clicks and groans can be heard during Biagio's silence as Lidvia confides to Stiyl and Agnese the secrets of the God's Right Seat after settling with having Oriana Thomson to be released instead to guide the weak in her stead.[1]

Biagio carries multiple necklaces holding several dozen crucifixes. His magic allows him to release the multiple meanings behind his crosses to use all kinds of power.[4][2]

A minor character, Haimura designed Biagio with no defining characteristic, burying him in overly decorated clothing.[6] 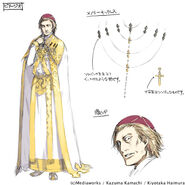 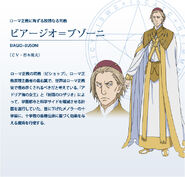