Cannibalization (カニバリゼーション, Kanibarizēshon?) is a hybrid technique created and used by Leivinia Birdway, using aspects from Africa, in order to save her sister from Sample Shoggoth.[1][2]

The method of cannibalization is derived from a hybrid of symbols, myths and legends from Africa. Africa, also known as the Dark Continent and a melting pot of tribes, cultures and legends, has often been a location which European magicians have visited when they have encountered a dead-end in their research which cannot be solved with the information and sought the answers elsewhere, just across the Mediterranean.[3]

One of the primary aspects of the cannibalization technique, from which it's name is derived, is a concept occasionally found in food-related legends, whereby someone with a sick body part can restore it to health by eating a healthy corresponding body part from another. Often another mammal is used, however sometimes it is from another human.[4]

Another aspect of the technique is derived from the use of corn in African magic. There are ways to escape curses by making a doll from it to serve as a substitute or sacrificing one in order to apply a curse. There are also various stories around the world where plants or grains have been arranged in human form to take someone's place. Due to difficulties in securing a human body in more recent times, magicians carrying out sacrificial ceremonies have had to find replacements and developed methods of producing the same effect as a sacrifice through consuming a doll made of wheat or corn, with dolls made of animal matter usually being a lot rarer.[5]

The technique uses these aspects by growing a new organ, based on corn, within the user's body, to be consumed by another in order to heal them.[4][5] The organ is also called a fruit, partly because the host is supplying it with nutrients to grow but also because, like a fruit, if it isn't used after it finishes growing, it will rot and wither, even if cut out and placed in a fridge.[5]

While growing the organ, Leivinia also wears an animal skin dress, resembling a rotten red carpet. It is derived from the story of Nya-Nya Bulembu (ニャニャブレムブ, Nyanyaburemubu?), a princess who was forced to wear an ugly animal skin, repulsing others but helping protecting her from men and interference while being raised as a beautiful princess with mystical power. Normally meant to be green and covered in moss, it appears red due to the other symbols mixed into the spell. As well as providing defense and concealment, it also acts as a medium to foster growth, supporting the organ's growth.[3][4]

Once the fruit was complete, it was meant to be extracted without opening the body through the use of a spiritual medicine, also derived from an African base. It would then be fed to Patricia, restoring the fat lost from the parasite and displacing it from her body.[6] Much like threads and sheets made from corn starch used in medicine to cover or close wounds,[5] the corn-based fruit would naturally break down, attach and fuse with the body tissues, meaning it wouldn't have to be removed later.[5][7]

Due to the human body's contents being tightly packed in with no wasted space, the growing organ puts pressure on the body. As it reaches completion, its size threatens to cause the body to burst from within. Even before then, growing within the vicinity of the heart and the network of major blood vessels and applying pressure there puts the host at serious risk and could easily take their life.[6] The strain also weakens the host even before that point.[5]

In order to test shape and composition, Birdway apparently grew a fake corn-based organ, about the size of a fist, outside of a body as a test.[8]

After Patricia Birdway was infested by Sample Shoggoth and Leivinia was unable to find a solution using the resources of the Dawn-Colored Sunlight, she devised the cannibalization technique based on various legends and method from Africa,[3][4][5] growing a test organ as part of her preparations.[8] Knowing from the design phase that it would almost certainly kill her, Leivinia left her cabal to act on her own in secret and proceeded to begin growing the organ for cannibalization.[6] Due to her lack of knowledge of magic, and knowing the repercussions of growing a new organ inside the body, Patricia rejected her sister's method and sought to have her give up.[9][10][6]

During the initial meeting between Kamijou Touma and Kamisato Kakeru, the two sisters caught the two in the middle of their clash.[11] Coming back to the scene of the clash afterwards, Touma retrieved Leivina and took her back to the Kamijou Residence.[12][3] On waking up, she explained Patricia's circumstances and what she was doing,[3][4][5] leaving out the fact that the fruit's growth would likely kill her.[6]

Leivinia faced Sample Shoggoth and her sister again when the Kamisato Faction attacked the Kamijou Residence, however she let Touma attempt an alternative method to save Patricia, using Claire's ability to make a plant-based fat which the human body would accept, with a similar structure to the Cannibalization fruit, and use it to replace the lost fat in Patricia body, displacing the parasite.[13] After Nephthys sacrificed herself to save Patricia following the premature elimination of Sample Shoggoth,[13][14] Leivinia removed the fruit from her body and destroyed it.[15] 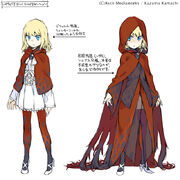 Leivinia Birdway's character design while using her cannibalization technique, from Shinyaku Toaru Majutsu no Index Volume 14, by Haimura Kiyotaka.
Add a photo to this gallery

Retrieved from "https://toarumajutsunoindex.fandom.com/wiki/Cannibalization?oldid=120480"
Community content is available under CC-BY-SA unless otherwise noted.