The Croce di Pietro (, Shito Jūji (Kurōche di Pietoro)?, lit. "Apostle's Cross") is a powerful magical artifact owned by the Roman Catholic Church that can forcefully subjugate a territory and its inhabitants under the will and dominion of the Church.[1] It is one of the church's Ten Holy Artifacts[2] and is considered to be the highest spiritual tool in legends comparable to that of the holy items left behind by the Son of God,[3] and a secret weapon of the Roman Catholic Church.[4]

At 1,800 years old,[5] the cross retains its pure white color, due to being made out of marble stone. The cross is 1.5 meters in length, the width of the cross-guards are 35 centimeters on both sides (70 centimeters in total) and has a thickness of approximately 10 centimeters.[6]

The cross has a sharp tip on the descending arm; the bars and the ascending arm have a design similar to that of pommels on sword. Most prominently, the middle of the cross has an elaborate design that resembles light rays coming from the center. Because of its design, it furthered the confusion and legend that the white marble is the Stab Sword.

There are several conditions to properly activate the Croce di Pietro; however, if properly applied, the Roman Catholic Church can theoretically conquer any place on Earth.[7] The Croce di Pietro requires a specific date for its activation; for example, the only date the Croce di Pietro can be activated in the Vatican is on June 29, while it can only be activated to take over Academy City on September 19. Once in the area, the spellcaster has to know its details, features and characteristics, as so the spellcaster can choose the most effective constellation out of the 88 constellations for the area. Finally, the artifact requires a proper location or observatory (referred to as Belvedere (, Tenmondai (Beruvedēre)?, lit. "Astronomical Observatory") by Lidvia) where the star light can be seen, to which the cross acts like an antenna that gathers the star light of the constellation that is ideal for the activation of the artifact.[8] The cross absorbs the light and uses the link with the constellations which acts like a magic circle to activate.[8] The incantation: "Let the sky be the ceiling, and let this place be a safe haven for the living. Please grant me protection, O twelve Apostles." is also required to stabilize the cross before it gathers starlight.[5]

Because of these constraints, the cross can only be used once a year.[7]

The legend of the Stab Sword being able to slay a dragon in half and pin it to the ground applies to the Croce di Pietro as well, though explained quite differently. The dragon in legend guarded treasure or brought about massacre; respectively, the dragon represents serving God's angels or the devil. The pinning of the dragon by the artifact represents turning the place where it is pinned as a holy ground through letting the angels protect it. As such pinning a location with the Croce di Pietro would render that location and its denizens a dominion of the Roman Catholic Church.[9]

The effects on the location that has had the Croce di Pietro erected on, would make any event occurring on its soil beneficial to the Roman Catholics. Its inhabitants will be none the wiser as they are under the belief that the occurrences are normal; as such everyone under it would be happy. However, according to Tsuchimikado Motoharu's explanations, although the power of the Croce di Pietro does indeed bring happiness, it is not because of an event that caused the happiness but the happiness is forced on people no matter what event it is, and in the end the Roman Catholic Church will reap the benefits from it.[9]

The maximum range of the effects of the Croce di Pietro is 47,000 square kilometers.[10]

The Stab Sword (, Shitotsu Kōken (Sutabu Sōdo)?, lit. "Thrusting Picket Sword") is a fictitious magic weapon, formed by the collective reasoning of people regarding the true purpose of the Croce di Pietro. It is speculated by Laura Stuart, that these reasonings and rumors have been propagated by the Roman Catholic Church to hide the true purpose of the artifact.[3] According to legend, the Stab Sword was able to slay a dragon in half and pin it to the ground. The Stab Sword is said to be able to kill any Saint in one blow,[11] regardless of location and distance.[12]

The Stab Sword can harm Saints as it utilizes their weakness, which is having the same type and nature of body as the Son of God; along with inheriting powers, Saints also inherited the weakness of the Son of God. According to lore, the Son of God was nailed onto the cross and was stabbed with a spear; the Stab Sword is a weapon that extract the religious meaning of the nailing and stabbing (as explained by Idol Theory), and expand and contract at will, to any length, though it is harmless to regular humans. The legend regarding the Stab Sword goes on beyond to say that once the sword is activated just pointing it in the direction where a Saint is, regardless of distance and location, even if the Saint hides or is in the netherworld, it will kill the Saint.[12]

The Croce di Pietro is named after St. Peter, one of the twelve apostles of the Son of God, and it refers to the cross that has been set up on Peter's tomb and where the St. Peter's Basilica now currently stands.[9] According to Orsola Aquinas' theories, St. Peter himself intended the date and the place of his death (execution), taking in consideration what would happen several hundred years later after his death.[7]

The Croce di Pietro which was prepared even before St. Peter's death, was erected on St. Peter's grave on the June the 29th (the date would be the only time the artifact could be activated in the Vatican) sometime after his death, it was the first time the cross has been activated. From then on the Vatican come to existence and flourished soon afterwards due to the effects of the artifact.[7]

The artifact is kept inside a two door vault with no windows, as so light cannot make contact with it, and is guarded by an elite group. The vault of the artifact will have a biannual cleaning by, to which it should be done only during the day time on a certain day (most likely not a day that properly obeys the conditions of activating the Croce di Pietro).[8]

The plan fails after the Croce di Pietro fails to activate as the festival's Night Parade, prevented it from gathering the light from the constellations. It is ultimately lost after it fell from the sky due to the actions of the Archbishop of the Anglican Church, Laura Stuart. 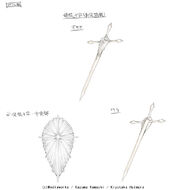 Design by Haimura Kiyotaka for Volumes Volume 9 and Volume 10.

The Croce di Pietro described as the Stab Sword featured in Volume 9.

The Croce di Pietro with translated description of it as Stab Sword.