Academy City
Disciplinary Action (ディシプナリ・アクション, Dishipunari Akushon?), known mostly as DA, is a rogue group within Anti-Skill that is obsessed with bringing justice to Academy City to the point of extremism and zealotry.

An organization within the Dark Side of Academy City, they were the primary antagonistic organization in the first arc of Toaru Kagaku no Accelerator.

On paper, the DA is referred to as a cooperative organization within Anti-Skill. The organization began originally as a group of those who received disciplinary action for going overboard in their law enforcement.[1] In reality however, it is a secret society that will use any means necessary to carry out what they call "justice".[1]

Much about the group is currently unknown, though they have extreme beliefs against the "evils" plaguing Academy City[2] are apparently willing to kill and use secretive methods to do it, like the Coffins.[3]

Despite their actions, the organization apparently gathers many sympathizers, allowing it to grow. From these sympathizers, the organization receives information, funding, and technology, enough for them to even boast that they can oppose the Board of Directors.[1] These people range from current and former Anti-Skill members to the highest echelons of Academy City such as Nakimoto Rizou.[4]

However, due to their zealotry and extreme actions, it is not uncommon for higher-ups to oppose them after growing fed up with their actions. Indeed, Nakimoto Rizou, who had originally financed the organization hoping to use them for his own ends, eventually decides that they were too much trouble and the benefits he could obtain from them no longer worth the resources and time it took to clean up after their reckless and zealot actions in pursuing "Justice" and hires the Scavenger against them.[4]

Nishio states that the organization's "mission statement" is to mercilessly crush evil.[2] According to Esther Rosenthal they are apparently trying to add a new layer to the world using Last Order, endangering not only the city but the entire world.[3]

The organization is composed mostly of members of Anti-Skill that have been given "disciplinary action" for going overboard in their law enforcement duties.[1] They are the ones that carry out the missions for the organization. As stated above, the organization draws in sympathizers, from which they get the other members of the organization, such as influential people, rejected defense contractors, and even dangerous neuroscientists.[1]

Members of the organization are apparently very zealous in bringing justice, and shows no reservations on purging other members who are deemed as cowardly.[1]

Yomikawa Aiho succinctly states that DA is like all of Anti-Skill's "darkness" has been gathered all in one place.[1]

In the anime, DA appears to use codenames in audio conferences, with higher-ups or backers (such as Nakimoto Rizou) using numbered Breeder (ブリーダー, Breeder?) codenames (with a red icon with an emblem of a hand holding a spiked leash), and other members using codenames derived from breeds of hound (with a blue icon with dog emblems), such as Basset Hound for Nishio and Dachshund (ダックスフント, Dachshund?) for Hishigata Mikihiko.[5]

DA Arouse (DAアラウズ, DA Arouse?) is a branch of DA that appears in Toaru Kagaku no Dark Matter. While another DA branch was busy with Accelerator and Esther Rosenthal, DA Arouse were instead preoccupied with trying to capture Yuzuriha Ringo but were foiled by Kakine Teitoku.[6]

On top of their standard Anti-Skill equipment, the organization is supplied by technology by their sympathizers. Their technology is enough for them to boast that they can oppose the Board of Directors with them. Even Yomikawa Aiho admits that their technology far surpasses the Anti-Skills own top technology.[1]

In the anime, DA members have helmets with retractable visors, which display a red outline of jagged teeth as they are lowered.[5] They are equipped with FN Herstal P90 submachine guns and Walther P99 pistols.[7] They also have access to a taser pistol with 4 barrels,[5] and their own version of the Glock 17 in APS Carbine stock.[8]

Below is a list of technology that is unique to the organization:

DA uses Anti-Skill’s blue armored trucks to transport their prisoners as well as their own members. It is also shown to house communication apparatus. They also use their very own model of a blue truck transports, it’s has specially shaped trailer and they also use old model of Anti-Skill Vehicles.

Several days before the incident at Heaven Canceller's Hospital,[3][9][5] several DA members came across Hitokawa Hasami after a failed suicide attempt and murdered her in the ambulance in order to make use of her ability in the Prototype Coffin.[2][9][5]

While attempting to capture Esther Rosenthal at Heaven Canceller's Hospital, DA member Nishio came into conflict with Accelerator after the latter saw signs that someone was after Last Order, resulting in the Prototype Coffin's destruction and his subsequent termination.[2][3][5] A couple of DA members later attempted to destroy Hitokawa Hasami's corpse in the morgue to eliminate any evidence pointing to them, but were thwarted by Accelerator and Esther's Huotou. During their escape, one of them abducted Misaka 10046 in place of Last Order.[10][11][4][12][7]

Following the incidents at the hospital, Nakimoto Rizou decided to get rid of DA and dispatched Scavenger to deal with them.[4][7] At the same time, previously hidden information on organization became accessible to Anti-Skill,[1][7] resulting in DA coming under attack from both groups. With their branches under attack, DA hoped Hishigata's weapon would turn the tables and aimed to get the abducted Misaka 10046 to him at Seiin High School after being told she was necessary for it to work, though Hishigata intended to sever ties with DA as soon as he got the Sister.[13][14][15][16][Tweak references at segment end as appropriate]

The Tarantula was deployed to this end, killing many Anti-Skill operatives but ultimately falling foul of Scavenger.[13][14][15][16] Meanwhile, the other remaining DA units converged on Seiin High School and its 6th Chemistry Building.[13]

During the events at Seiin High School, numerous members of DA which had gathered there were consumed by the Taowu's growing body as the impatient Isaac Rosenthal tried to speed up the process, resulting in him being overwhelmed by their desires to enforce "justice", losing control over the Taowu as a result.[17][18] Following the Taowu's destruction, the organization was left destroyed.[19]

The individuals operating under the Breeder codenames might not necessarily be part of the organization itself, but those who aren't higher-ups in DA itself do provide major support and backing to the group (such as Nakimoto Rizou, prior to him terminating his support).[5][7] 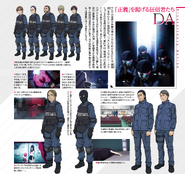