Toaru Majutsu no Index Wiki
Register
Don't have an account?
Sign In
Advertisement
in: Articles to be expanded, Characters, United States of America,
and 3 more

Vice President of the United States

NT Volume 3 (unnamed)
GT Volume 4 (actual)
Darris Hewlane (ダリス＝ヒューレイン, Darisu Hyūrein?) is a character introduced in Souyaku Toaru Majutsu no Index. He was the Vice President of the United States, but secretly betrayed President Roberto Katze and allied with R&C Occultics under the given title Citrinitas (キトリニタス, Kitorinitasu?).[1][2]

Citrinitas is the third of the four main stages of the alchemical magnum opus, the process used to create the philosopher's stone.

While acting via remote double as Vice President on December 26th, he appeared as an aged man, with blue eyes and combed-back grey hair, in a green suit.[3] In his true body, he was described as an old man with wrinkly skin, looking as desiccated as a mummy, with a tattered yellow cloak.[1] The sand construct he was hidden in was in the shape of a feminine doll with exposed ball-joints and a metal mouth restraint like a dog muzzle, clacking open and closed, paired with one in the shape of Melzabeth Grocery.[4]

As the Vice President, he was present during Roberto's press conference in Oahu regarding the aftermath of World War III.[6][7]

At some point after Anna Sprengel regained her body and created R&C Occultics, Darris came into contact with them and secretly allied himself with them, acquiring the magic and title of Citrinitas,[2] the latter at least given to him by Anna herself.[1]

Early in the morning on December 26th, Darris was present in Los Angeles as Citrinitas to defend R&C Occultics HQ, while remotely controlling a double of himself in the White House, involved in the correspondence between the American government and the joint Anglican-Academy City force involved in Operation Overlord Revenge, their counterattack against R&C Occultics. After tricking the President into giving the joint force the go-ahead prematurely, he used his magic in conjunction with the meteorological control provided by the Logistic Hornets to engulf the city in a giant sandstorm and trapped the city's population and the joint force in the sand.[2]

Throughout the day, Darris continued to operate as Citrinitas in Los Angeles (at one point fighting and trapping Kanzaki Kaori), hidden inside one of a pair of constructs fashioned in order to place the blame for his actions on Melzabeth Grocery and acting towards that end,[2][4][10] while accompanying and secretly undermining Roberto as the Vice President in the White House,[11][12][13][14] intending to bring about Roberto's removal from office in some way to allow him to take the position of President as an emergency replacement.[15]

After the Sisters came to Kamijou Touma's aid in Los Angeles, facing the magic-hijacked Five Overs, he was exposed as a traitor when he fell for a trap in Roberto's speech and said something he should not have known.[14] His treachery revealed, he ended up in a gunfight and clash of words with the President before abandoning his remote double.[14][15][16]

At the same time, he was fighting Touma in Los Angeles, calling on the Logistic Hornets to engulf the city again. However, when he tried to have one crash after Stiyl Magnus disrupted the weather control, the Hornets began to reject his commands.[5] Not long after this, Touma succeeded in reaching and defeating him, destroying his constructs and spiritual item, while he was also confronted with the reality of his position.[1] With the core of his magic destroyed, the population of Los Angeles freed and Darris was subsequently arrested.[9]

Darris is said to have graduated at the top of his class from an Ivy League school, and presumably possesses skills needed for his role as a politician and Vice President of the USA, as well as his earlier role as a secretary.[15] He is capable of wielding a semi-automatic shotgun, as seen in his gun battle with Roberto Katze.[14][15][16]

At the time of the battle in Los Angeles, Darris presumably had a means of hijacking and using technology such as the Five Overs,[17][18][10] as well as commanding the Logistic Hornets.[1]

Citrinitas (, Kitorinitasu?) is the magic which Darris obtained after allying with R&C Occultics, derived from a Rosicrucian interpretation of the alchemical process of the same same,[2] as well as the title he was given as a magician by Anna Sprengel, allegedly a rank of expertise but also indicating Anna's true intentions regarding him.[1]

Citrinitas is the third of the four main stages in the cycle of conversion used to create the philosopher's stone, following nigredo (black and death) and albedo (white and bonding), and preceding rubedo (red and rebirth).[2] In this yellowing stage, a type of fermentation, the would-be philosopher's stone is buried underground (with a special egg being buried in sand in a certain Rosicrucian text) and 'ferments', undergoing a beneficial transformation that gives it new value.[2] The spell allows its user to remake or 'ferment' people covered by their sand into formless 'nutrients' and absorb them into the sand, trapping them alive but transformed, buried on the assumption that they would eventually be retrieved in some different form, just like with the stone.[2]

Darris can wield this sand in various forms, such as a large compressed mass, glass shards, and a sand pillar that can act as a sandbag to cushion blows, as well as firing it in a compressed shot like a laser or pressurized water jet.[2] The sand could also be used to form remotely controlled humanoid constructs that can pass as human,[2] with Darris using one in the shape of Melzabeth Grocery and a leashed doll, which contained his actual body, to carry out the role of magician Citrinitas in Los Angeles,[2] and one in his shape to carry out his role as Vice President in Washington D.C., on the other side of North America.[2] During the events in Los Angeles, the sand's effectiveness was greatly bolstered by the meteorological control of the Logistic Hornets.[2]

The spiritual item which acts as the core of the magic (held within the Melzabeth construct) is a transparent jelly-like fist-sized object, containing a curled up thing like a partially-formed baby bird, covered in black feathers and soaked in red blood, but not looking like a living or formerly living thing.[1] It is derived from an egg mentioned in Rosicrucian texts, formed from two types of bonds from the beheaded and dissolved king and queen, and buried in sand to ferment.[1]

According to Rosicrucian teachings, most magic users can complete the third stage, but fail to fully control the 'bird' born in the fourth and final stage, being distracted by worldly desires and losing sight of the item's essence at the last step.[1] While Darris took his title to indicate a rank of expertise and mastery as a ruler of the third stage, after telling him about the Rose teaching that most could complete it, Othinus put the title another way - that it showed a magician who couldn't reach the fourth stage and complete the process, indicating that Anna did not expect much of him, using him as bait to obtain the more valuable Melzabeth like a worm for a fish.[1] 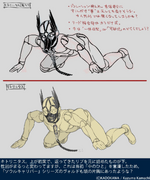