He was described as a large man.[1]

He is considered to be a honorable and reasonable person throughout the story. In a conversion with Shiage, he reveals that he doesn't hold any contempt for Japan or Academy City; as he stated that the villages were all being targeted by Russia before the war even started.[2] When a frostbitten Russian soldier is found, Digurv helps him as leaving him to die won't change anything.[2]

Digurv was first introduced in volume 20, offering Shiage medical treatment from the village doctor for Takitsubo Rikou in exchange for the gas in the car.[1][2]

In the first attack by privateers, Digurv carries and protected Rikou from the raid and told Shiage about the privateers' reasons and methods of attacking.[2] Later he and the Russian soldier, Glickin, helped Shiage drive a tank in order to fight the attack helicopters.[3]

He, Glickin and the other villagers later saved the reunited ITEM from its handler and pursuers from Academy City.[4]

As a tourist guide, Digurv can speak Japanese.[1] 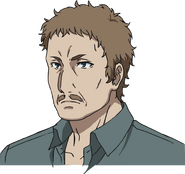 Retrieved from "https://toarumajutsunoindex.fandom.com/wiki/Digurv?oldid=241177"
Community content is available under CC-BY-SA unless otherwise noted.