Toaru Majutsu no Index Wiki
Register
Don't have an account?
Sign In
Advertisement
in: Articles to be expanded, Characters, Science Side Characters,
and 4 more
English

This article refers to the clone. For the Academy City project referenced in volume 3, visit Clone Dolly.

Imaginary Fest (story mode only)
Dolly (ドリー, Dorī?), referred to as Prototype (, Zero-gō (Purototaipu)?, lit. "Number 0"), is a character introduced in Toaru Kagaku no Railgun. She is a clone of Misaka Mikoto, a prototype for the Sisters for their mass production. She is a childhood friend of both Shokuhou Misaki and Kouzaku Mitori.

Originally deceased at the start of the story, all her memories and knowledge are later transferred to a clone of hers after her old body expired. In spite of this, she is essentially the same person and as such the same character.

Her name most likely comes from the legendary sheep known as Dolly, the first mammal to be cloned from an adult somatic cell, using the process of nuclear transfer.

Her epithet of Prototype likely refers to her being experimental and to her being a clone that is a prototype for the Sisters.

Dolly, appears as though she has medium brown hair, with front bangs. When she was first introduced she was wearing a small black tank top. She apparently looks middle school aged. She has a life-support device embedded inside of her body that sticks out from it and has scars on her body.[2] She looks like Misaka Mikoto, implying that she is a clone of hers (albeit a prototype).

Later, after getting all her memories and knowledge passed down to a clone, she no longer has the scars that were present in her previous body.[3][4] She also has long hair, which she retains after being freed from the facility.[3][4][5]

She wears pink jacket, shorts, and black spats for her casual attire.[6][7] She also wears large light brown newsboy cap,[6][7] which she sometime keeps her long brown hair in.[5]

Compared to the other Misaka clones, Dolly has a more fleshed out personality.[2][8][9] She displays genuine emotions and is more humanlike, like when she started crying after being reunited with Kouzaku Mitori.[3][4] Due to her only being a prototype and not being a part of the Level 6 Shift project, she is not correlated to Accelerator or Kamijou Touma. As such, she likely does not hold any special relationships with either of them.[Multiple references needed]

Though her origins are shrouded in mystery, she is a clone of Misaka Mikoto, a benchmark for the Radio Noise Project clones, but is numbered differently as she is not part of it. Her exact purpose was to research more long lasting clones for mass production, and was given drugs by researchers to gain more data. Moreover, she was also created as an experiment into constructing an information sharing network between the clones, the Misaka Network.[10][4]

At the same time as this, a sister of hers has been created at the same time, where her memories and experiences are later transferred into her. Dolly never met her little sister, but is told that if she takes her medication then she can help her, and that if they can heal her she can have many little Sisters.[10][4]

Likely because of her status as a clone and the researchers' neglect of her, her body apparently begins deteriorating, needing machines embedded inside of her as a life-support system.[10][4] These machines are apparently poorly embedded, easily displaced if she is jolted. There are scars on her body of unknown origin.[2][9]

She is also part of the Clone Dolly Project, where the Exterior Project, a project to create Exterior, a DNA computer that creates esper powers, that involved replacing Shokuhou Misaki, was being held as well. Kouzaku Mitori was later tasked on becoming her friend, whom Dolly immediately takes a liking to, calling her Mi-chan. Mitori would later visit every day. However, one day she saw Dolly naked and the machines that are upon her while she was being checked up, and from that point on never came to visit her again. This is likely because Mitori later discovers the truth about Dolly and is later beaten up and imprisoned afterwards. Regardless, Dolly became depressed, worrying the researchers as she is a valuable research subject. The researchers later request Misaki to brainwash Dolly to make her think that Misaki was Mi-chan in order for them to get valuable data from her. At first, Misaki hesitates and is even horrified at what she sees embedded inside/onto Dolly. However, after hearing Dolly's tragic story from her about the loss of her friend Mi-chan, Misaki eventually acquiesces. A week later, Dolly has come to believe that Misaki is her friend, Mi-chan who has come back to visit her again.[2][9]

And thus, many days are spent on them becoming friends, and Dolly even shares with Misaki her dream of wanting to see the ocean and to get outside of the research institute. But alas, this dream was never realized. Dolly one day collapses. Misaki becomes worried and in the throbs of her pain, Dolly asks Misaki's name and thanks her for being her friend, revealing that she knew of her ruse. Dolly likely figured it out when she noticed that Misaki had a different scent to Mi-chan.[8][9]

Her body apparently had limits which could not be extended even by Academy City's medicine, and was predicted by the researchers who had adjusted their plans accordingly to her lifespan. Dolly later passes away. Her death later has a profound effect on Misaki, who later forces the truth out of the researchers after taking over the entire facility.[8][9]

A flashback to Misaki and Dolly's past occurs after Misaki is forced to use the Exterior in order for her to force the people in the streets of several kilometers in their car into moving away, enough for her car to move and speed up.[8][9] Mitori would later have a flashback of Dolly herself after being defeated by Shirai Kuroko.[10][4]

Later, after Misaki reads Gensei's mind that Dolly's experiences and memories have been transferred to a clone, she tells Mitori of this, and allows her to come with her. After infiltrating the facility, there they discover Dolly's clone in an incubation chamber and frees her. The clone's consciousness wavers until finally it awakens and calls out to Mitori's name at the sight of her. There, after a terrible long count of years, the two friends, Dolly and Mitori are finally reunited. Dolly, seeing Mitori, asks her if she is Mi-chan, to which she confirms. Breaking down in tears, Dolly says she missed her and the two girls embrace. Dolly says that she thought Mitori hated her because she found her creepy, to which Mitori denies. She then notes that she remembers Mitori's scent and notes on how nostalgic it is. She then says that she loves her.[3][4]

Meanwhile, Misaki, who is hiding in the shadows watching them, finally tries to leave. However, Dolly calls out to her, knowing who she is. Misaki tries to play it off, but Dolly says she knows she is Misaki because they are always together in their dreams, and says the time they've spent together is the only memories they both have. Misaki is at loss for words, and then finally, she apologizes to Dolly. With emotions overcoming her, Misaki says that she is sorry for deceiving her, manipulating her memories, and her getting lost in the comfortable lie of being her friend. She says that if she had looked into who "Mi-chan" was then she could've reunited her with Dolly, and if she had known the truth of the experiment she is sure that Dolly wouldn't have died. Misaki says that it is all her fault for selfishly putting herself between the two of them. And then states that she'll do anything to make it up to her.[3][4]

Then, Dolly with Mitori, come from behind Misaki and embraces her, telling her that she wants her to take her to the beach, let her ride a roller coaster at an amusement park, let her see a hippopotamus at the zoo, ride an airplane, and see an aurora in Finland. She continues on with many more requests, to which Mitori says that it is way too much. But Dolly can only help but laugh. She says, as she leans on Mitori, that if they are all together, anywhere is fine, and asks if they can do that. Hearing this, Misaki says that Dolly still ignores what everyone says and force her opinion on them. She turns to them to reveal the tears upon her face and says that Dolly is selfish and that there's no arguing with her.[3][4]

Dolly appeared briefly in this arc, now wearing casual clothes when Mitori communicated with Misaki via Liquid Shadow puppet.[6] After the Doppelganger incident, she goes to an aquarium center with Mitori and Misaki.[7]

Dolly participates in the jailbreak trial event together with Kouzaku Mitori.[11][5] After the trial, she buys souvenir for Misaki, Mitori, and herself.[12]

Dolly was mentioned by Dion Fortune along with other Sisters.[14]

Since she is a clone of Mikoto, and a prototype of the Sisters, with the latter associated with her creation as a way to create an information sharing network between the clones, since this can only be done with her being an esper, an Electromaster-type at that, it can be assumed that she at least have some Electromaster abilities. Likely, this is later proven true as her memories of wanting to "go to the beach" somehow seep into the Misaka Network and to Misaka 10032, promoting her ability as Radio Noise (, Kekkan Denki (Redio Noizu)?, lit. "Flawed Electricity"), the same one all the Sisters have.[3][4]

In her second body, Dolly is capable of using her long hair in conjunction with her ability as makeshift 'rails' for a railgun.[5] 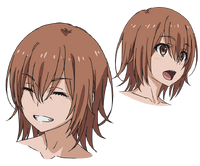