This article refers to the reiterating term. For the entity codenamed 'Dragon', see Aiwass.

Dragon (ドラゴン, Doragon?, alt. 竜, Ryū) is a mythical creature found in many stories around the world and a recurring term which has appeared in various instances throughout Toaru Majutsu no Index. Most notably, it is the codename used to refer to Aiwass and a term which he has used to refer to himself.[1][2]

The dragon is a rare mixed symbol in Christianity, a religion which strictly divides good and evil, crossing the boundary between the two by representing the devil but also being used in heraldic crests signifying houses and organizations.[3] Crossing the usual duality, the dragon symbolizes many things.[3][4] It is the ruler of the depths and a guardian of treasure.[3] In its role as a guardian of treasure or a massacring monster, it has been said to represent respectively, the dragon serving God's angels or the devil.[5] As well as representing a fallen angel stained with evil, it also represents pagans and foreign invading forces.[6]

In Christian tales, dragons have been the adversaries of various saints. Examples include Saint Martha, who is said to have subdued a dragon using a prayer full of compassion and love,[7] Saint Matthew, who is said to have defeated two dragons using just a cross and prayer,[8] and Saint Margaret, who is said to have been swallowed by a dragon and expanded the cross to stab the dragon from the inside.[9] Perhaps the most famous of these tales is that of Saint George and the Dragon, where the wandering knight Saint George slew a large fire-breathing dragon which was terrorizing a city and its inhabitants, who were forced to appease it with offerings of sheep and children, with the princess having just been sent when he arrived.[10][4]

The clash between knight and a savage dragon is a common depiction found in many legends, both in Christian and non-Christian cultures, with a number found within Norse Mythology.[11] The final adversary of the Geat warrior Beowulf was a dragon,[12] which the old king managed to slay at the cost of his life.

In oriental cultures such as China and Japan, dragons tend to have large serpentine bodies with clawed feet, wingless but often capable of flight. They are often associated with rain and bodies of water, with the Japanese sea god Ryujin or Watatsumi being one example.[13][14] Among the four guardians associated with the cardinal directions in Eastern magic traditions, the Azure Dragon or Seiryuu/Qinglong signifies the East,[15][16] Spring (and consequently the element of wood) and the color blue.[15][16][17][13] Although Eastern dragons tend not to be as antagonistic as the ones in Western stories, there are malevolent ones, such as the eight-headed serpent Yamata-no-Orochi.[18]

Outside of mythology, dragons have often been featured in fantasy stories and RPGs.[19][20][3]

The first instance of dragons being referenced is during Kamijou Touma's first fight with Stiyl Magnus, the word that was used to describe Touma negating Stiyl's flame sword is tornado, which literally means "winding dragon" in Japanese.[21]

Later, during Index's rampage after getting her John's Pen Mode activated to attack Touma. Here, Index uses St. George's Sanctuary named after St. George to distort the space between her and Touma. She later uses Dragon's Breath against Touma, which according to the possessed Index is the most suitable spell against Touma's Imagine Breaker. Indeed, Touma could not fully dispel the attack and required the help of Stiyl Magnus and Kanzaki Kaori to defeat John's Pen Mode Index.[22]

One of the most notable references to dragons in the series is the transparent Dragon King's head that appeared in place of Touma's right arm after being severed by Aureolus Izzard. According to Stiyl Magnus, the Dragon King may have been what Aureolus Izzard imagined in the eleventh hour after Touma used fear to disrupt his Ars Magna. Touma's right arm is later reattached by Heaven Canceler. After a talk with Stiyl, Touma wondered if the Dragon King's head was really created by what Aureolus thought or if it was unrelated to the Ars Magna, but he immediately discarded this option, thinking it was impossible.[23]

The 7th Index Light Novel Volume has Tatemiya Saiji reference an evil dragon that Kanzaki Kaori defeated on her own in order to fulfill a child's wish, and is referred to as being able to swallow an entire mountain.[8] In all adaptations of the story arc the depictions are different. In the second season of the animated series, the dragon takes the form of multi-tentacled monster or perhaps a multi-headed serpent similar to the Yamata no Orochi. In the manga adaptation, it takes the form a single-headed giant serpent. Regardless, Kanzaki defeats the dragon, but at the great cost of having her comrades decimated in the battle. This is one of the reasons why she left the Amakusa-Style Remix of Church.[8]

Bishop Biagio Busoni briefly mentions the dragon that swallowed Saint Margaret when explaining that his cross-expanding spell is based on St. Margaret's Crucifix, with St. Margaret having expanded her cross to stab the dragon's stomach from the inside.[9]

Near the end of the arc, Tsuchimikado Motoharu retrieves the Tweezers from Kakine Teitoku that he had used to analyze the UNDER_LINE network. With the gloves attached to a monitor to desplay the information on various organizations to the members of GROUP, that Motoharu, Accelerator, Musujime Awaki and Etzali discover a member-less organization, simply named DRAGON.[1]

The word Dragon is referenced several times during the arc in the form of the retelling of the legend of St. George of slaying the dragon, where his saving the princess that was about to be sacrificed to parallel William Orwell's rescue of the princess Villian during the British Halloween and that he also carries a replica of Ascalon with him. During his subsequent confrontation against the Knight Leader, the latter declares himself as someone who symbolizes a dragon, the Knight Leader quietly noticed that in the values of the Christian Church, the dragon was the symbol of more than one thing. For example, it represented pagans and foreign invading forces, but it also represented a fallen angel stained with evil.[6]

GROUP becomes more involved with looking into DRAGON after they find out that the only demand of the rogue group Spark Signal was for information on the mysterious DRAGON.[24] After the main team from Spark Signal was taken out, Group is contacted by director Shiokishi instead of their usual contact over the phone. He informs them of a group of survivors tried to made an escape and for that reason ordered GROUP with chasing them down and deal with them.[25] After dealing with the remnants of Spark Signal, Accelerator proceeded to tell the others about Sugitani's appearance to execute the members he captured where they realize that Shiokishi is eliminating everyone with knowledge of DRAGON as they debate their options they come under attack.[26] After escaping the ambush the members of GROUP ally themselves with Oyafune Monaka to take on Shiokishi.[27]

After dealing with the director's forces and director Shiokishi himself was captured, GROUP proceeds to interrogate him about DRAGON he remarks he 'unfortunately' does know the truth about DRAGON, and it might have been better if he did not know in the first place. When GROUP asked him what DRAGON was, he replied “DRAGON is everywhere" and then everyone else, including GROUP, except for Accelerator, got knocked unconscious. After the director exclaimed the one behind them that did this was not Fuse Kazakiri like he thought after Etzali's comment about DRAGON could be used as a meaning for an "angel", he lost consciousness as well due to blood loss.[2] In front of Accelerator appears Aiwass, a higher dimensional super-being, the true author of the Book of Law and Crowley's mentor summoned to the physical plane of existence by Aleister himself. Aiwass keeps Accelerator conscious out of curiosity having recognized that he has a certain level value and is surprised at Accelerator's inaction on GROUP's current state. Aiwass is surprised that Accelerator did not immediately attack it after swiftly defeating the rest of his comrades, and states to him that it was interested in him. After several failed attempts to provoke him Aiwass reveals that Aleister's plans to replace Last Order as she will inevitably break down, and that if it was defeated, Last Order might be saved, Accelerator decided to just kill Aiwass.[28]

Níðhöggr is referred to as a "dragon" or "dragon-like" creature that was summoned through the spiritual item Brísingamen by Freyja. It was used in the invasion of Tokyo as a way to harass the populace in order to stop people from uniting as what happened in World War III against Fiamma of the Right.[29]

During the flight from the Karma-bearing chain beasts, which interfered with spells involving color and caused them to malfunction, Tsuchimikado Motoharu made use of a spell involving a dragon origami, the association between dragons and water, the Black Tortoise symbolizing water and the Azure Dragon, with the expectation that they would interfere with the coloration and send it out of control, allowing him to unleash a giant water blast regardless of the interference.[13]

During the events at Windsor Castle in the aftermath of the attack on the Queen Britannia, the symbolism connected to dragons was mentioned at various points, with Touma and his doppelganger both assuming the form of dragons during their struggle.[3]

In an attempt in stopping Misaka Mikoto while her powers were rising to Level 6 from firing a giant black sphere, Touma, as Sogiita Gunha was holding her back, tried to negate it with his Imagine Breaker, but his right arm was ripped by the great resistance opposed by the sphere. Immediately afterward, a Dragon King's head, the same that appeared in the fight against Aureolus Izzard from Touma's severed arm, came out from the wound, this time showing a long neck. Thereupon, seven other dragons each different in its own appearance accompanied it to stop the power from being unleashed by destroying the black sphere of destruction and releasing Mikoto from the effects of Mental Out connecting her to the Misaka Network. Touma's right arm later regenerated by itself. As both Mikoto and Gunha saw the dragons, this proves that the Dragon King's head wasn't merely imagined by Aureolus.[30]

Shundan Kimi, an esper who was imprisoned in the private juvenile hall, summons a dragon to eat through her chains and then tests her ability by attacking the guards. This dragon is identical to the "Angel" dragon that appeared during the Daihaseisai. It is unclear whether Kimi managed to trap and control the actual dragon or if she uses her ability to reproduce its appearance. Whatever its origin, this dragon is manifested using an esper ability (as Kimi could not use it while under the effects of an AIM Jammer), does not require the loss of Kimi's right arm to appear, and Kimi can control it to some extent.[31] It is strong enough to destroy a building with its charge. It also has the ability to transform iron sand, and possibly other substances, into a white substance that crumbles easily (implied to be salt, from Raifu's reaction). This ability causes a cross on the dragon's head to light up, and leaves a similar cross mark on whatever is transformed.[32]

One notable inclusion in the game is the dragon that appears in the Deep Blood Arc. It appears briefly during Touma's finishing move right before Touma punches an opponent character. 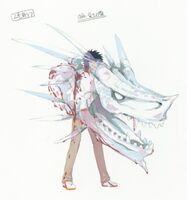 First Design of the Dragon Strike by Haimura Kiyotaka for Volume 2.

Preliminary concept art of the dragon heads, with the rejected "Branch Horn", "Bull Horn", "Four Horned", "Strange-looking", and "Extraterrestrial" dragons prominent. Only the "Angel" and "Energy" dragons are missing from the group.

Concept art featuring the final designs chosen for the eight dragon heads together for publishing in Railgun Volume 10.

Retrieved from "https://toarumajutsunoindex.fandom.com/wiki/Dragon?oldid=264412"
Community content is available under CC-BY-SA unless otherwise noted.