Draupnir (, Banshō no Kin (Doraupuniru)?, lit. "All-Creating Gold") is a spiritual item created by Marian Slingeneyer from the components left from the failed attempt to forge Gungnir. It is based on the dwarven forged ring possessed by Odin in Norse mythology.

Draupnir (meaning "the dripper" in Old Norse) is a golden ring owned by Odin, forged for him as a gift by the dwarves Brokkr and Eitri. The ring 'drips' eight identical gold rings from itself every ninth night.

Draupnir takes the form of two golden bracelets with the design of a serpent eating its own tail, likely a reference to Jörmungandr, a serpent so large it was able to surround the earth and grasp its own tail. When activated, the bracelets extend to 30cm across while remaining around the wrists of the user.[1]

Draupnir allows the user to freely bring together any magic sword or divine spear which is on a level that a human can use.[1]

When used, the bracelets first expand out while remaining in place around the user's wrists like the rings around a planet, before disappearing in a flash of light, forming the desired weapon. Currently, the only known weapon it has ever produced is Dáinsleif,[1] which was originally destroyed by Othinus.

After Othinus abandons GREMLIN at the Sargasso in Tokyo Bay, Marian produces Draupnir from the components left behind from the failing attempt to forge Gungnir. After catching up with Othinus and Kamijou Touma in Denmark, Marian uses Draupnir to bring out Dáinsleif, which she uses in an attempt to kill the two. Draupnir was likely destroyed with Dáinsleif when it comes into contact with the Imagine Breaker during the ensuing battle.[1] 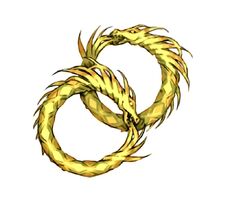 Draupnir as it appears on Shinyaku Toaru Majutsu no Index Volume 10's back cover.
Add a photo to this gallery

Retrieved from "https://toarumajutsunoindex.fandom.com/wiki/Draupnir?oldid=285892"
Community content is available under CC-BY-SA unless otherwise noted.