For the concept, see Four Elements.

Elements (エレメント, Eremento?) are a type of artificial life form created by Kihara Yuiitsu, which swarmed Academy City during an abnormal December heatwave.[1][2][3][4][5][6]

A hybrid of science and magic, Elements are a reduced life form (還元生命, Kangen Seimei?). The bodies are created in the shape of animal and plants, a reverse of the process which converts the remains of animals and plants into petroleum over long periods of time. As this method can create an outward form but can't give it a soul or life, a magic-based core is used to animate the body.[7]

Elements have a large translucent crystal body and take the form of an animal or plant, often one specializing in mimicry. The Elements themselves also specialize in mimicry, being capable of blending in with their surroundings.[1] The internal structures of the Element are inefficient copies of those of regular living creatures, made from a carbon base and with a high specific gravity.[8][9]

The Elements are driven by a magic-based core in the center of their body, shaped like a will-o'-the-wisp, which indicates the type of power it can use. The colors and powers of the cores correspond to the four elements; fire (red), water (blue), wind (yellow) and earth (green).[1][2][4] Some variants are noted to be more common than others, with fire being common and wind rare.[2]

Elements are also classed according to their size, with the minimum size of each class being twice the minimum of the previous class; Class 1 being 3m, Class 2 being 6m, Class 3 being 12m and Class 4, initially assumed to be the largest, being 24m. The largest Elements seen are Class 6, which can measure over 100m.[4]

While their structures are based off regular creatures, Elements can continue to move even after sustaining damage which would kill a normal creature. However if their core is destroyed, the Element will cease functioning and fall apart at the joints.[9]

Though possessing considerable strength due to their size, camouflage and elemental powers, Elements have a number of weaknesses. The activity of Elements is reduced in temperatures exceeding 42 degrees Celsius, which greatly limited their movements during the 55 degree heatwave, restricting them to cool, dark places during the day.[10][2][11] Driven by supernatural power, the Elements are vulnerable to Imagine Breaker. One touch to the body will destroy the core, though it won't immediately and completely destroy the body itself.[2]

The Elements can follow commands and are apparently capable of emitting killing intent unlike machines,[9][12] but lack the intelligence to carry out certain tasks; while they can climb stairs and break down doors and windows, they can't open locks, turn doorknobs or use ladders and ropes.[3] They can also self-destruct on command, leaving nothing but a pile of white sand-like particles.[13]

The Crystal Tower (水晶の塔, Suishō no Tō?) is a structure which appeared in the center of School District 7, acting to guide the Elements descending into Academy City from space. Breaking through from below a domed stadium, the tower was 200m tall and 30m thick at its base, thickness reducing further up the tower like an inverted icicle. The tower resembled the Elements when seen from a distance.[14]

Elements entered Academy City by dropping down from space at night when few were looking. In order to achieve a pinpoint landing on Academy City, as well as an angle of entry such that they won't be deflected outward or burn up in the atmosphere, they required guidance from the surface. The Crystal Tower carried out this function by intermittently sending up an optical signal into space from the center of the city.[15][14]

With a structure similar to that of the Elements, the Crystal Tower was vulnerable to Imagine Breaker and began to collapse on touch.[9]

The true function of the Crystal Tower however was actually as a decoy to draw out and identify potential threats, as well as a trigger for a counterattack. While the enemy's attention was focused on the conspicuous tower and space-drop, their base of operations would be tracked and then destroyed by a coordinated attack to cut off their supply line before moving in to finish them off.[9]

Following her initial acquisition of the World Rejecter on December 5th, Kihara Yuiitsu unleashed the Elements to draw out Kamisato Kakeru and the Kamisato Faction. In order to slow the Elements down, Fran caused a 55 degree heat wave in the city, restricting their movements. For the next few days, the residents of the city suffered due to both the Elements and the heat wave, with a few groups and individuals fighting against them. When Kakeru and his faction eventually confronted Yuiitsu below the Windowless Building, she cannibalized the remaining Elements for her own version of the Anti-Art Attachment.[1][3][4][5][6]

After the battle, Yuiitsu had no further need for the Elements and commanded them self-destruct.[13] After confirming the threat of the Elements was past, Useful Spider began reconstructing the city.[20] 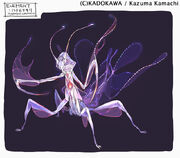 Retrieved from "https://toarumajutsunoindex.fandom.com/wiki/Element?oldid=304725"
Community content is available under CC-BY-SA unless otherwise noted.