Elza (, Eruza?) is a Magician and a member of the Kamisato Faction.[1]

Elza is a girl with long unkempt light brown hair that has two tufts that resemble a fox's ears. She wears a white long-sleeved sweater and a red pleated skirt that reaches her ankles, as well as a fake fur tail chained to her waist and a baby carrier where she carries a large water bottle filled with copper yen coins.[2]

She is often distinguished among Kakeru's three usual companions for her delinquent look, as well as the tendency of her breasts to shake when responding to something.[2]

Elza has the atmosphere and image of a delinquent,[2] and presents herself accordingly, though certain aspects of her run contrary to it and she apparently has trouble with things that don't fit her image.[3] She tends to get embarrassed when her cooking skills are praised[3] or when surprisingly romantic thoughts from her are pointed out,[2] and angered when the way she carries around her bottle like a baby or her large breast size is pointed out.[2] As with other members of the Kamisato Faction, Elza tends to respond negatively to those who harm or slight Kakeru.[4][2] whom she refers to as "boss" (大将, Taishō?).[2]

According to Kamisato Kakeru, Elza was his childhood friend that lived next door to him. They apparently stopped speaking to each other as they grew up which Kakeru understood as perfectly natural.[5] But after some sort of event that Kakeru was involved in with her, apparently involving her falling from the sky and landing on top of him with her underwear missing,[2] she fell in love with him and joined his Kamisato Faction.[5]

Late on December 3rd, Elza and Claire arrived at the apartment which the Kamisato Faction were using as a safe-house, not long after Kakeru's encounter with Sample Shoggoth-infested Patricia Birdway. Learning of the situation from Ellen, they recognized the usual pattern that they were familiar with regarding Kakeru and girls. Despite the problems at hand, the trio of girls ended up doing their own thing and dragging Kakeru and Patricia along with them, going to a public bath and then eating out after botching dinner. However, later that night, when Kakeru managed to persuade Patricia to let him help her, the girls resolved to help as well, together with the assembled Kamisato Faction.[6]

Elza and Claire were both present during the initial ambush and negotiations with Kamijou Touma, as well as the subsequent attack on the Kamijou Residence. After being spotted by Touma, who had been informed about her magic, Index targeted her with Spell Intercept, causing her coins to explode out of her bottle, providing enough of a distraction for Touma to reach Kakeru.[7] After Nephthys sacrificed herself to save Patricia following the premature elimination of Sample Shoggoth, Elza and the rest of the Kamisato Faction stood back as Touma and Kakeru faced one another.[8]

On December 4th, Elza, Ellen and Claire were observing Kakeru from afar, after he transferred to the school which Touma and his classmates were going to after their school's destruction. While they were doing so, they received a message from Fran alerting them to Salome's arrival in Academy City.[9]

On December 5th, Elza was present when Kakeru betrayed Touma and set the Kamisato Faction on him, intending to kill him to make Salome stop, and attacked Touma with a shower of coins.[10] They were thwarted when Salome herself interrupted them, bringing a provoked Accelerator with her.[11] She was also present when Kakeru approached Touma at the school's incinerator that night after manipulating his classmates, and blocked Salome as she attempted to strike.[12] After Kihara Yuiitsu ambushed Kakeru and severed his hand, Elza and Ellen got Kakeru to safety and gave him first-aid while the others fought Yuiitsu.[13][14]

During the Element infestation and the subsequent heat wave in the city caused by Fran to slow them down, Elza and the rest of the Kamisato Faction set up a base in the White Springs Shopping Center. On the morning of December 9th, Elza participated in the faction's march to the Windowless Building and the subsequent battle with Yuiitsu beneath it.[15][16][17] After Kakeru was forced to use the World Rejecter with conflicting desires to protect the others and was exiled, Yuiitsu used the threat of losing the possibility of saving him to force the Kamisato Faction to obey her. Elza and the others then attempted to kill Touma on her orders.[18]

Elza's magic allows her to use 'something like a' Kokkuri to possess people and objects.[1] Elza uses this magic to control the numerous copper coins she carries around, being able to use over a thousand of them at once to create a projectile storm capable of tearing away asphalt. She can further control the coins by shaking the empty bottle, gathering them together into a whirlwind shape.[10] Elza also used her filled bottle to block Salome's punch, warning Salome about being cursed by treating the Kokkuri coins carelessly.[12] Her coins are susceptible to Index's Spell Intercept.[7]

She is also apparently a good cook.[3]

During the planning of the designs for Kakeru's faction members, Haimura expanded on the concept of being "twisted in a galge-ish way". Among the three girls, Elza's design, which was inspired by the Tamamo-no-Mae (a fox spirit in Japanese folklore) remained consistent.[19] 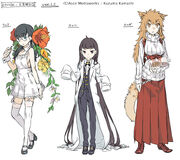 Claire, Ellen and Elza's character designs from Shinyaku Toaru Majutsu no Index Volume 14, by Haimura Kiyotaka.
Add a photo to this gallery

Retrieved from "https://toarumajutsunoindex.fandom.com/wiki/Elza?oldid=181114"
Community content is available under CC-BY-SA unless otherwise noted.