Equ.DarkMatter are Powered Suits created by Academy City that utilize Kakine Teitoku's ability, Dark Matter, for their creation. It is also how the group of Dark Side affiliates who utilize them are referred as.

The Equ.DarkMatter suits are pitch black with some tones of gray and are slim-fitting; to the point that it gives enough of a person's figure that you can determine someone's gender by closely observing. There are some variations in suit constructs[1], probably to show difference in rank.

The suits are equipped with masks of a platinum color that is twice the height of a human face. The masks do not have eye or mouth holes and shine with artificial light -- and the words "Equ.DarkMatter" are inscribed upon them. They are designed for mobility and therefore lack heavy-duty armor and can be shot through with proper weapons, as shown when Hamazura Shiage fought and killed three of them.[2]

Equ.DarkMatter's strength lies in their masks, which have been forged out of the Dark Matter Kakine Teitoku is producing while hooked up to Dark Legacy.[3] The masks allow attacks with multiple pairs of White wings that spread from them, akin to Kakine's own seraph wings.[4] The wings are very durable and very sharp, to the point where Shiage thought of them as "something that can cut through everything", using the wings as either shields or blades can easily make up for the suits lack of body armor or additional offensive equipment.

It is stated that the masks and the wings that spread out from them are made of the same material. The wings that the Equ.DarkMatter masks unleash are described as organic.[2] Strangely, Kakine's ability is described as something that controls the inorganic while Accelerator the organic.[5]

Underneath the suits, they wear Hard Taping, the same that Komaba Ritoku used.[2]

Equ.DarkMatter are sent to kill Hamazura Shiage and retrieve Mugino Shizuri and Takitsubo Rikou. Hamazura tricks them by making them believe they shattered a Russian biological weapon agent that he was planning to use for negotiating with Academy City. In fact, it's just a soda can. During the assailants' panic, he managed to kill two members, but a third grabs onto him with an arm and lifts him in the air. Before the Equ.DarkMatter member can kill Hamazura however, Mugino's Meltdowner severs the attacker's arm. All three members are killed in this fight by the new ITEM.[2]

Equ.DarkMatter's design remains static throughout the series, and were originally based around the concept of monsters appearing old tokusatsu shows. 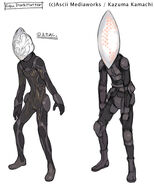