Floris (フロリス, Furorisu?, Yen Press: Florice) is a character introduced in Toaru Majutsu no Index. She is a member of New Light. Originally, a supporter of Carissa's usurping of power in the United Kingdom, her group would later go on to aid the resistance forces in stopping Carissa's self-destructive actions. At the height of the British Halloween, she would go head to head against Kamijou Touma, and through a complicated series of events gains a grudge against him.

She has white skin and blonde hair, and wears a pair of small dragon wings on her back.[2] Like the rest of New Light she wears the same uniform, though customized to her needs. She has a jacket draped over her sports shirt and has spats on under her miniskirt. She is also apparently is around 15 years old.[1]

Despite her age, she is very serious of her duties and has leader-like qualities. She is the one that orders the rest of her team to prepare for the next step of their plan and make adjustments on their equipment, even while Bayloupe is humoring Lessar's antics and while she is driving their car.[1]

Like the rest of her group, she is patriotic to her country, only wishing the best for it, enough for her to make an enemy out of it and harm people if it is necessary.[3] Despite this, she is unwilling to die bravely for just one mission unlike Lessar.[4]

They are commissioned by Princess Carissa to excavate the thought to be long lost Curtana Original for her plans in changing the United Kingdom. With their base in Edinburgh, Scotland, they are able to excavate the magic artifact in a place where there once a fortress. Due to their group being styled similarly to a Cabal Reserve Army, they are able to avoid attention being drawn towards them.[3]

New Light is first noted after finally excavating the Curtana Original from Edinburgh, Scotland. As they travel to London, England via a highway using a car, they are notified, likely Knight Leader as he is the only likely person with Laura Stuart during the terrorist incident with Sky Bus 365, that Necessarius will be sealing off highways in Scotland in order to facilitate their plan in forcing the plane to make an emergency landing. They later use their magic to remove the illusion cast by Necessarius on the plane, stopping the pilot from making an emergency landing.[5]

When New Light were heading down a country road towards London, Floris was focused on driving and ignored Lessar's pleas for help after angering Bayloupe. Seeing how the scenery remained the same, she asked Lancis if she was sure this was the right route, but Lancis was unable to answer due to the tickling she got from magic power. Floris asked Lessar if preparations for the container were complete and on hearing they were, told Lessar she did a good job and that Bayloupe's weakness was her calves. Rubbing her stiff shoulders, Floris checked her wings and seeing Lancis is tail fine, asked Lancis about her claws. She then told Bayloupe and Lessar to finish making adjustments as she was busy driving and Lancis was incapacitated by the tickling. As Lessar continued to protest, Floris remarked on what a pain this was. At 11 PM the girls are only 30 kilometers away from London, and later arrive shortly.[1]

As New Light began their operation in London, Floris was walking down a small road as she swung her case onto her back and communicated with the others via spell as one of the relay points. She mentioned how she wished they could put up a people-clearing field but that if they did they'd be found immediately.[6] She later encounters Kanzaki Kaori and is quickly defeated by the Saint's physical strength, sent flying over 20 meters into a sign, making her the second New Light member to be defeated, the first being Bayloupe.[7] Despite the damage done to her, the relay of the Curtana Original between the cases is successful and it is sent to the fifth case carried by the Knight Leader.

After her defeat at the hands of the Amakusa Christians, she is later restrained and put into a Necessarius sanctuary. When the knights attacked Anglican Church establishments, they later find Floris and put her on a train to Folkestone without removing the restraints. This is so that they may kill her later as they have planned in taking New Light out after their job was done.[4] Kamijou Touma later finds her in the train after sneaking into it to get to Folkestone. Even though Touma noticed that her clothing style "was similar to something he saw before" he couldn't make the connection that it was a "themed uniform" similar to what Lessar was wearing. After confirming that Touma is not with the knights, she introduces herself and asks for his aid.[2] Floris assumes that Touma has been captured by the knights, but he points out that he snuck into the train to get to Folkestone, intriguing Floris. She then asks Touma to get her out of the restraints using a key, though Touma points out that he can simply use his right hand to destroy the restraints to which he did. Floris becomes annoyed as his crude method in destroying her restrains have alerted the knights. This forces Touma to open one of the doors of the train that leads to the outside. Despite the dangers, Touma says that they should jump, much to Floris' displeasure, who says he can do so himself. Touma points that there is a river for them to land in, but Floris points out how ridiculous jumping into a river at a height and at a great speed really is. Despite her fear, Touma grabs Floris and jumps out of the train. Despite the water, Floris points out that isn't even a meter deep, much to Touma's horror. Floris is forced to use her dragon wings to offset the speed of their fall.[4] They later hit the water and floated down stream, at which point Villian finds them.[8] An Amakusa Christian scout later finds them after being informed by Agnese Sanctis that Touma is in Folkestone. Seeing that Touma led her to one of her previous captors, she could only address her dire situation to a confused Touma with a rage filled comments such as "you tricked me! You bastard!"[9]

When Elizard uses Union Jack to distribute the power of the Curtana Original to the British people and calls on them to use their power how they see fit, Bayloupe uses a pen to draw a magic circle and contacts the other New Light members. Lessar, Lancis, and Floris are connected. When asked by Lessar what they should do, Bayloupe isn't sure, saying it didn't seem right as they helped bring about the coup but they do what is best for the United Kingdom so they had little choice but to act regardless of shame or honor.[10]

According to Lessar, Floris’ grudge against Touma persisted even after the coup d’état was over, she even spoke of how she was "definitely going to kick that Japanese guy’s ass" before Lessar left for Russia with Touma. [11]

Lessar mentions that she and the rest of New Light played rock-paper-scissors on who will get the plane ticket to Japan and see Kamijou Touma on their upcoming counterattack against GREMLIN. Lessar states that she won the plane ticket after beating Floris who cried during the final match.[12]

When Mikoto and Lessar arrive at Nihon Daruma's North Gate store, Floris is sleeping on a couch in the break room, with Lancis having climbed on as well. After Lessar wakes them both with a blow to the head, Floris identifies Mikoto and apologizes for the trouble Lessar had caused her. She then peels a sleepy Lancis off her and leaves the break room with her.[13]

Floris later rescues Lessar as she is about to be crushed by the giant wheel snake unleashed by Caliche's group. As she flies away with Lessar in her arms, the two discuss the basis behind the snake coming after them. With the snake ploughing through any obstacles to get to them and Bayloupe's lightning bombardment not having much effect, the two try to figure out a weakness in its construction. With time short, Lessar suggests to Floris to drop her onto it to find out how to halt the gears without having the Telesma go out of control. Floris argues against it due to the risks involved, but Lessar persuades her to go through with her plan. After doing so, she, Bayloupe and Lancis assist Lessar with the spell to destroy the wheel snake.[14]

As Mikoto and Lessar rush to the launch facility, Floris contacts them from the stock market centre to inform them that a part of Code EIC the size of a refrigerator has been removed. Mikoto asks her to try to restore the phone lines and though not knowledgeable in that area, Floris agrees to do what she can.[15]

After the incident ends, New Light prepare to leave by charter plane. As they wait, Floris relaxes in a massage chair. After removing Lancis from her lap, Floris talks to Bayloupe about the aftermath of the incident and the possible intentions of the parties involved. Just before they receive clearance for take-off, they receive a signal from one of their spiritual items, indicating that it has located the Curtana Original.[15]

As a member of New Light, Floris is proficient in the use of Norse Mythology-based magic. Like the other members of her team, she carries with her the Steel Glove spiritual item, a pole arm with the blades looking like the four digit hand. The Steel Glove incorporates three legendary items that is associated with the god Thor. This increases her arm strength, gives her tremendous destructive force, and the ability to "grab" apparently anything anything.[16]

Unique to her is a pair of small dragon wings on her back, which can use to offset the speed of her falling.[4] According to Lessar, Floris' role is usually to use her wings to recover her from deep within enemy lines.[17]

Other abilities and equipmentEdit

Floris' overall design remains fairly static throughout the series. Along with all the other members of New Light, Haimura was tasked on designing them not to look like magicians, but that of lacrosse players, and used their suits as a common symbol between all four of them.[18]

Floris design for vol.17 and 18 by Haimura Kiyotaka. 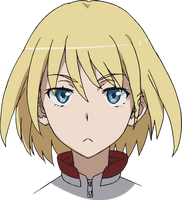 Retrieved from "https://toarumajutsunoindex.fandom.com/wiki/Floris?oldid=213510"
Community content is available under CC-BY-SA unless otherwise noted.