She is a mysterious, seemingly human, woman who has existed since the age of witch hunts, and by the time of the Ichihanaran Festival Arc, was imprisoned inside the Windowless Building until being freed through the efforts of Kamijou Touma and Thor.

Fräulein is derived from the Germanic honorific that is previously in common use for unmarried woman, comparable to Miss in English. It can be presumed that Fräulein isn't actually her name, as even Reading Thoth 78 has declared that her identity is unknown.[1]

Kreutune has the appearance of a woman who is almost two meters tall. She has silver hair, which is depicted as lavender in the illustrations instead of Index's "blue" silver hair. Moreover, the hair is unkempt and is long enough to reach her ankles and obscure her face. Her clothes consist of a two-piece transparent dress made out of synthetic fiber, revealing her pink underwear.[2]

She is seen by Touma as having inhuman characteristics, despite no obvious signs of being different from a regular human being, just a feeling of something singularly off regarding her appearance, most likely similar to the Uncanny valley.[2]

Fräulein has no readily apparent personality, other than her seemingly infinite curiosity to absorb information. She has no concept of like or dislike, and she is driven not by any sense of ideology but by curiosity.[3] It's as if her entire existence is based solely on her absorbing information or learning as much as she can from her environment, as concluded by Reading Thoth 78.[1]

She is apparently not particularly malevolent and only attacks when provoked, or if she deems certain people as threats such as Thor or Kamijou Touma. Moreover, she's benign enough to be strung along by two children, specifically, Last Order and Fremea Seivelun. Furthermore, she is utterly taciturn,[4] only speaking when asked, as with the case of her telling Last Order and Fremea Seivelun who she is.[5]

Records of her existence in the pasts, specifically those in the age of witch hunts in the Middle Ages,[6] shows that she wasn't as taciturn as she was now. The veracity of these reports is unknown, but it shows that Fräulein can full meaningful conversations with others, and can do sarcasm and even boast. It is the case with one of her trials, were a person she calls a priest "kind" to mock him of his actions towards her, which did no work due to her queer abilities. Moreover, she apparently had normal human emotions and expressions.[7]

She seems to be immortal, impervious to conventional forms of damage,[6] and retains her youthfulness. Legends abound that she has survived and outlasted 308 of the trials by ordeal that became the basis fir the "confession by torture" method that was later often used in witch hunts. Although accounts of her do exists, they are buried by numerous other legends during the time period of the witch hunts.[8] Because she is an impedement to the Plan related to Academy City,[3] due to her innate drive to learn and transform after acquiring enough information,[1] she was imprisoned the formerly impenetrable Windowless Building, the same building where Aleister resides in. In total silence and darkness, this sensory deprivation prevents her from being curious.[3]

Othinus first mentions Fräulein at the end of the suppression of Baggage City by Academy City, where Fräulein is apparently part of her goal to gain power through the distortion of the world—holism.[9]

Eve of the Festival

Fräulein is mentioned several times by Thor, and uses the fact that she is trapped inside the Windowless Building to recruit Touma into rescuing her as she is the center of Othinus and Ollerus conflict that may put Academy City in danger. However, she first appears only after Thor and Touma break through Calculate Fortress, and from there, piques the attention of Fräulein, and creates a huge hole from which she emerges. She immediately notices Touma and Thor, and quickly subdues them via her powers,[10] and from then on, the City went into Code Red.[3]

Fräulein reappears after destroying the Four Wings that threatened Thor and Touma a while back during their attempt at breaking the Calculate Fortress,[11] near a takoyaki stand that was preparing for the Ichihanaransai, and in her curiosity, first stares at the man working on it and then starts imitating him, as if she herself was making the takoyaki. At first she was clumsy at it but became more adept quickly. As she does that, several Anti-Skill operatives led by Kakita appear before her. As he reports to his colleague over the radio that he and his unit will now restrain her, but is apparently told over radio that they have no jurisdiction. Kakita argues with someone over the radio, after being told that they should take Fräulein to a place which has the jurisdiction. Kakita tries to argue his place, and states that the standard procedure is to take her to the neares branch. He is then told a false report that Fräulein is a spy disguised as a diplomat, but this does not make Kakita yield. He later orders Momozawa to handcuff her, and Yashiro to bring the Anti-Skill truck around. However, before Kakita can finish his instructions, Fräulein stood up and they are forced to surround her.[12] Fräulein gets away and can be assumed to have taken them out herself.

As Last Order and Fremea Seivelun continue to there lost sojourn in Academy after eating at the Food Stand Spire,[13] the two girls discover Fräulein, who begins to mimic Fremea's movements.[14] For some unfathomable reason, Fräulein aids them in finding their way back into School District 7, and is successful, as Last Order recognizes an area. After being dragged along, Last Order tries to thank and her and asks her name, to which she responds that her name is Fräulein Kreutune. Last Order and Fremea wants to exchange e-mail addresses with her, but seeing as she had no cellphone, Fremea however, gave Fräulein her child buzzer to her that was originally from Hamazura Shiage and the others. Fremea tekks her that it uses GPS, and if she pulls the string, it will send her current location to the cell phone registered with it. Essentially, allowing Fremea to be notified of her whereabouts. Fremea notes that it can receive e-mails without cost from the registered cell phone. Fräulein seemed puzzled with the device, and continues to stare at it. She is interrupted by Last Order saying that they are now friends. Fräulein is confused by this, to which Fremea answers that there is no reason why they can't be friends. After analyzing the situation, Fräulein concludes that they are indeed friends.[4]

While Fräulein ponders to herself what the term "friends," Anti-Skill surround her and uses anti-life form and anti-machine smoke bombs. The narration refers to having her eyes roll in a strange way that seemed odd for a response to violence.[1]

As the eve closes down, Reading Thoth 78 discusses with Aleister Crowley, who apparently accessed the AI, regarding Fräulein Kreutune. It states that Fräulein will transform after acquiring enough information, though states that it will take 2,300 years for her to collect such information. However, if she consumes Last Order's brain and takes control of the Misaka Network, she can reduce 2,300 years to a mere 3 seconds. The AI notes that the time when Fräulein will acquire the properties that is needed for her to absorb powers through brain consumptions is within two hours.[1]

Fräulein is a queer existence. According to Reading Thoth 78. despite some genetic differences, Fräulein can only be called human, therefore, she could either be another species of human or a subspecies of it. However, it concludes that her identity, probably including what she truly is unknown. To add further proof to this, she is referred to by the AI as a life form that does not possess a Personal Reality as she does not have a mind or ego, a prerequisite for humans to be referred to as espers, and that her powers project only from her simplistic mind in contrast to espers who control it through the use of their entire body[1] and is corroborated by Thor referring to her as a person that has not been dyed by the colors of "magic" or "science."[6]

Her thought patterns are referred to as similar or even more simplified compared to an insect, but her body is overly optimized. Her only apparent motivation is to "learn". She scans the conditions of her environment and the direction that leads to the most suitable environment for her, and here, regardless of what type of information, she absorbs the information in her environment by scanning it. This ranges from apparently simple observation, to plain mimicry, as with the case of the boy in the takoyaki stand, which she starts imitating, eventually becoming even better at it.[12] Continuing with the insect metaphor, once Fräulein has absorbed enough information, she will grow from a collection of continuous thought processes even simpler than an insect’s to a more complex and flexible thought process. In the process of that growth, she will likely experience a great change, that is probably greater to what can be referred to as "Fräulein Kreutune".[1] Fräulein has the ability to modify herself to adapt herself in the environment. Since, she has physical limitations, her transformation will only occur after she has absorbed enough information which should take her an estimated 2,300 years. However, with the advent of the Misaka Network, if ever she can control it after eating Last Order's brain and reproduce its structure within herself to acquire its properties, she can reduced the time to three seconds. Furtheremore, if she deems doing so is necessary, any personal circumstances, such as her friendship with Last Order, are estimated to not be enough of a factor to stop her true nature from taking over and eating the brain.[1]

Once transformed a great change between a larva and an adult insect, that is Fräulein Kreutune, which her transformation conceals the possibility of reversing the position of prey and predator. If the position of the hunter and the hunted are reversed, the construction of the food chain will collapse and incredible damage will be done to the current culture that is centered on mankind’s use of science. The deprivation of her senses, and putting her in an environment that she does not consider interesting stops her from learning anything and potentially "transforming."[1]

Fräulein is designed as she is described in the novels. Not much else is known about her design details, but Haimura comments on how she reminded him of the Pillar Men of Jojo's Bizzare Adventure fame. 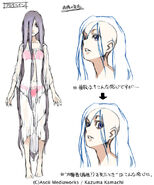 Fräulein Kreutune sketch and head detail by Kiyotaka Haimura.
Add a photo to this gallery

Retrieved from "https://toarumajutsunoindex.fandom.com/wiki/Fr%C3%A4ulein_Kreutune?oldid=33081"
Community content is available under CC-BY-SA unless otherwise noted.