Toaru Majutsu no Index Wiki
Register
Don't have an account?
Sign In
Advertisement
in: Articles to be expanded, Brands
English

Gekota (ゲコ太, Gekota?, Yen Press: Croaker) is a popular mascot found in merchandise marketed to children in the Toaru Majutsu no Index universe. A Gekota fan is called a Gekoer (ゲコラー, Gekora?).[1] Misaka Mikoto is a huge fan of the franchise it belongs to, and much to her consternation gets her labeled as someone who is childish.

Gekota seems to belong to a cast of characters composed of frogs. Several characters have been revealed to exist in the franchise so far.

The Gekota franchise is the most prominent one in the Toaru Majutsu no Index universe, and there has been a lot of various items that feature its characters.

Gekota figures were used in the ritual in order to represent Tsukuyomi Komoe and Index.[9][10]

Because Touma lost to Mikoto in their Daihaseisai bet, he was forced to do anything she wanted. Mikoto made Touma sign a pair contract with her in order to subscribe to a handy antenna service. A free pair of Lovely Mitten Gekota straps, featuring Gekota and Pyonko, were acquired by the two for subscribing to the service.[2]

Acqua of the Back Arc

Mikoto headed to the Spa Resort Serene Springs in District 22 in order to collect the 10 stamps needed to acquire a free out-of-bath Gekota strap.[13][27]

Stephanie Gorgeouspalace had Gekotas hanging from her Light Machine Shotgun.[28][29]

The straps acquired during September 30th were mentioned several times during the arc. The first instance of which was Mikoto staring at her phone with the strap on it, thinking about looking into the upcoming World War.[30] Lessar later on asked Touma about the strap when he saw it hanging from his pants pocket.[31] Mikoto later on saw Touma, with the Gekota strap in his pocket, on a broadcast about the situation in Russia.[32] This prompts Mikoto to head to Russia by hijacking a supersonic bomber, and meets Misaka 10777, who later inquires about the aforementioned strap. At the end of the arc, Mikoto saw Touma's torn Gekota strap at the coast.[33]

Hamazura Shiage points out the torn string attached to Touma's phone, making him realize that the Gekota strap came off. Later on, Mikoto returns the strap she found to Touma, who reattaches it to his phone.[34]

At least one large illuminated Gekota-themed decoration was present in the streets of Academy City on Christmas Eve.[35]

Someone in a Gekota costume was present in the background as Kamijou Touma and Kumokawa Seria's group were walking through Harajuku, Shibuya on December 31st.[39][40]

A free Gekota strap was being given away by the newly opened stall, Crepe Rablm. The first 100 customers were given the strap for free, with Saten Ruiko being the last winner. She gave it to Mikoto, realizing how badly she wants it.[11]

Mikoto, Kuroko, Ruiko, and Kazari went to the Academy City Fireworks Display together. At the night fair, Mikoto bought a Gekota mask from one of the stalls. She later used this mask when she attempted to infiltrate the Advanced Education Department.[18]

Mikoto spent at least 10,000 yen on gashapon in order to acquire a Gekota badge.[12] She later gave it to Misaka 9982 who cherished it until her dying moments.

Mikoto was shown to be wearing Gekota pajamas on the night before she attempted to hack the Tree Diagram Information Receival Center.[15] Her phone was also revealed to be part of the Lovely Mitten Gekota line of mobile phones.[6]

Mikoto wore the same mask she bought during the night fair in order to hide her face during the Balloon Hunter competition, after Misaka 10032 was dragged into playing the game in her stead.[19][41]

On the second day of the festival, Hokaze Junko sees that Mikoto has a Gekota phone and reveals that she has one too. She says that she managed to acquire a rare mail order limited edition Gekota strap from that year's M-fes. She tells Mikoto that she will give it to her if she gives her all in the day's events. Mikoto becomes very excited for a moment, but then realizes that this is all a trap and that Junko is frighteningly skilled.[1][42]

When Mikoto tried Indian Poker for the first time, she experienced a dream where she encountered multiple Gekotas and played with them. It is later revealed however that they are actually servants of dream Shokuhou Misaki, with one of them giving a sad look to Mikoto when she was about to refuse Misaki's order to massage her back. This lasted until she wakes up from her dream.[5][43]

During the incident involving Kuriba Ryouko's doppelganger, Scavenger's Leader used Gekota-themed communication badges to communicate with Misaka Mikoto on their pursuit against the Doppelganger.[44][45][46] Later on, other Scavenger members used them as well to communicate with Leader to evacuate the Skill-Out thugs in the Doppelganger's path.[45][46] Leader used it again guide Mikoto through the badge on finding the real Doppelganger on the airship.[47][48] After the incident, Scavenger decided to keep the Gekota badges when they decide to replace their outdated equipment once they got the funds on their future missions. Leader took a liking to the character afterwards.[49][50]

Toaru Kagaku no Mental Out

In the unlockable Mikoto Route, Mikoto chases Touma around because the latter obtained Gekota Chocolate before she did, not to mention insulted the mascot character by calling it weird.[24]

Mikoto in her Gekota Pajamas 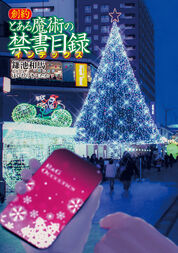 A Gekota float in the Daihaseisai's Night Parade