Railgun PSP
Hazamaya Kana (硲舎佳茄, Hazamaya Kana?), originally referred to as the Bag Girl (鞄の少女, Kaban no Shoujo?) in her first appearance, is a character introduced in Toaru Kagaku no Railgun.

She is a young brunette, who wears her hair in twin pigtails, and brown eyes. Naturally, as a child she has a petite body. She is often seen with that pink bag of hers.

She has a cheerful and polite disposition. Although, as natural to that of a child, becomes quite tearful when faced with a difficult situation, like losing that bag of hers.

Little is known about Kana, although, it is known that her bag was given to her by her parents as birthday gift.[1]

She first appears crying over the lost of her beloved bag, which garners the attention of Uiharu Kazari and Shirai Kuroko, of Judgment. Unbeknown to her, Misaka Mikoto—masquerading as a member of Judgment—finds the bag, and under the belief that it was one of the innocuous things the Graviton Bomber uses as a bomb, tried her best to find it safely. After saving it, and her ruse has been discovered, Mikoto realizes that it was just merely a bag. In the end, Kana thanks Mikoto for her work.

Kana later meets Kamijou Touma in a mall, who helps her find a dress for her. They both later meet with Mikoto in the mall, to which Mikoto tries to challenge Touma again, much to her chagrin. After leaving Mikoto's sights, the girl later finds her way into the clutches of the Graviton bomber, planning his grandest scheme yet. Hither, he gives Kana a frog (not Gekota) doll to give to Kazari, not knowing that it is a bomb. Touma later finds his way back to Mikoto, and asks where Kana is, as the mall descends into an emergency, since the bomber has been detected thither. Following his orders, Kana tries to give Kazari the doll, and in that instant, the graviton particles inside the doll collapse upon itself, and explode. Kazari tries to protect Kana with her body, while Mikoto tries to use her Railgun on it yet she fails dismally, as the coin that she uses as armament drops away from her. They are however saved by Touma, who uses his right hand, the mysterious Imagine Breaker, to block the inferno that resulted from the explosion of collapsed graviton particles from the girls. Touma later leaves immediately after that, leaving Mikoto to be the hero who saved Kana and Kazari.

She reappears along with her friends during the Sisters Arc, asking Mikoto to play with her. After a little bit of fun, Kana introduces Mikoto to her friend Nao, who is a incredibly weak Electromaster, only able to produce a spark if he tries really hard. Kana entertains the idea that if he was more powerful, Mikoto could communicate with Nao like a "Radio", to which Mikoto scoffs at the idea, as there are many too many interferences in the city, and states that it could be possible if there was a brainwave network, like that of the Level Upper set up by Kiyama Harumi. After exhausting all capsules in a gachapon machine, just to get a Gekota badge, Mikoto sticks several badges on Kana and her friends. She later leaves them as she picks up a power that is incredibly similar to hers, which leads to her discovery of Misaka 9982.[2]

Although she herself doesn't appear in the entire arc (she does in the anime, however), her crude drawing of the Balloon Hunter competition taking place is used for the explanation of its rules. She is apparently a first grader.[3][4]

She later appears in the Dream Ranker Arc on her way to study at the Learning Core and asks Mikoto to take her there. Mikoto is reluctant to do so, as she wanted to go to the convenience store which was in the opposite direction, but Kana firmly requests/demands that Mikoto come anyway. As they walk, it slowly becomes apparent that Kana is behaving out of character, first by calling Mikoto a muscle-brain and then by not-too-subtly implying that she knows about Mikoto's failed attempt to acquire the Bust Upper, an Indian Poker card that supposedly contained the secret to making boobs grow. This causes Mikoto to realize that Kana is being controlled by Shokuhou Misaki, who is hiding nearby, and to demand that she stop making Kana say such mature things. Misaki complies, releasing Kana from the mind control and sending her away with some advice: study hard so she does not become a muscle-brain like Mikoto.[5][6]

Kana is officially named as part of the promotion for the game. In the introductory manga, Kana is distraught after one of her pigtails got cut by the mysterious Hair cutting lady. Overhearing this, Mikoto and friends decide to investigate. Kana appears during the game's talking bits.[7][8] 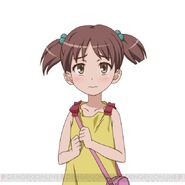 Kana's sprite from the Toaru Kagaku no Railgun PSP game.