Hishigata Hirumi (菱形 蛭魅, Hishigata Hirumi?) is a character introduced in Toaru Kagaku no Accelerator, associated with the rogue Anti-Skill group DA, though she and Hishigata are merely using it for their own ends. Hirumi, however, was already dead by the start of the series, and was merely being possessed by the evil spirit Taowu.

Hirumi has long hair, styled into twin tails. In her first appearance, she had little on and was directly connected to a large number of wires and pipes.[1]

Hirumi and her associate Hishigata are part of DA, and are in search for the perfect mind and body.[2] However, the two have their own plans and are just using DA for their own ends.[1]

She was apparently a normal high school girl at the same time as Esther was tricked into becoming a supervisor in Hishigata's research into how esper powers reside in the human body. In spite of that Hirumi and Esther became friends. Hirumi later dies and Esther resurrects her, much to Hishigata's relief. However, she later discovers that Hirumi became possessed by the evil spirit Taowu.[3]

Throughout Hirumi's entire appearance she has yet to speak a single line of dialogue.

Hirumi is first referred to by Esther Rosenthal when speaking to Hishigata, when he has the Qiong Qi face her and Accelerator, asking if she intends to begin, to which Hishigata replies that given they are aiming for the perfect mind and body, they have no reason to stop.[2]

Hishigata later speaks to Hirumi, who is connected to several pipes, after his conference with the DA leaders, saying that it is probably time for them to cut their ties with DA and that they will say goodbye to them once they get their hands on the Sister.[1] 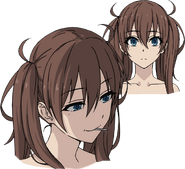 Retrieved from "https://toarumajutsunoindex.fandom.com/wiki/Hishigata_Hirumi?oldid=190164"
Community content is available under CC-BY-SA unless otherwise noted.