Hitokawa Hasami (人皮 挟美, Hitokawa Hasami?) is a character introduced in Toaru Kagaku no Accelerator. She was a 1st year student in Ninoude High, and was a Level 2 Pyrokinesist who was killed by agents of DA after a failed suicide attempt.[2][3][4] Her corpse was later retrieved then reanimated with Huotou by Esther Rosenthal,[5] currently serving as Esther's guardian.[6]

She appears as a young woman. She has waist length light brown hair and eyes of the same colour.[7] While alive, she wore the uniform of Ninoude High.[3][4] After reanimating her corpse, Huotou tended to move around in her body naked aside from wearing Esther's cloak.[8] Following the battle with Scavenger, Huotou obtained an Anti-Skill uniform to wear over her body instead.[9]

Immediately prior to her death she had low self-esteem, even mocking herself for not being able to kill herself.[3][4]

Based on her residual memory, she apparently born outside of Academy City. At sometimes in the past, she transferred to Academy City and took Power Curriculum Program. Her level was low and she failed to fulfill to her mother's expectations.[1] Three days prior to the beginning of the Toaru Kagaku no Accelerator manga, Hasami attempted suicide by jumping off a bridge. Despite the presence of many witnesses to her suicide, her corpse was not found.[2][4]

She actually survived her suicide attempt and ended up in an ambulance, crewed by members of DA. After lamenting her failure to even kill herself, the DA members finish the task that she could not have done herself. They drowned her with river water through her oxygen mask, mockingly consoling her that her body would be used for justice just after they say that she committed an evil act, which was killing herself. She suffered and felt fear as she died.[3][4] Someone also shoved a magic circle drawn on a parchment, a magic charm, into her mouth afterwards. Her corpse was inserted by DA into a large prototype mecha that used her power. When the mecha used her power, her lowly Level 2 ability exponentially became more powerful, at least enough to be compared to a Level 4.[2][4]

Her body is found by the Accelerator immediately after destroying the mecha that held her corpse, her pained expression as she fell from the machine reminding him of the Sisters. Anti-Skill is later summoned by Heaven Canceller to the scene of Accelerator's battle.[2][4] Anti-Skill later had Heaven Canceller look over her corpse, and there he found the parchment inside her mouth. He later gives it to Accelerator, piquing the attention of Esther Rosenthal who says that it is a low-level spiritual rank charm. As a necromancer, she later performs a ritual on her body as so she can "pass through the gates of heaven." The ritual allowed her to manifest Hasami's "residual memory" into a tangible form, which Accelerator touches it in his curiosity, causing him to see Hasami's memories from childhood up to her death.[3]

Esther later successfully inputs a Huotou into her body, but the ritual is interrupted when two DA members masquerading as normal Anti-Skill appear, the same ones who had killed her included, back to destroy her corpse. When Accelerator confronts them, the Huotou activates and takes control of her body, seeing its master in danger (Esther), it attacks and destroys the weapon of one of the DA as well as creating a crater on the floor with a single kick. It was willing to get the corpse shot in order to protect the "charm" on it that allows for the Huotou to continue its possession, that is until Accelerator steps in to deflect the bullets.[5] When Accelerator dispatched the first DA member and Esther pursued the other as he attempted to flee, it protected Esther when the DA member caused the ceiling to collapse on top of them. Shifting the rubble, it then spotted another path and told Esther to hold on. After receiving Esther's cloak, it took off after their quarry, breaking through the wall and intercepting the DA member as he was escaping the hospital.[8]

Her esper ability is Level 2 Pyrokinesis (, Hakka Nōryoku (Pairokineshisu)?, lit. "Ignition Ability"), allowing her to create fire.[4] To what extent could she create and manipulate fire is unknown, though it is likely that she is incapable of displaying advanced feats of Pyrokinesis as shown by Okahara Ryouta for example.

When her corpse was reanimated by Esther's Huotou, seemingly removing her natural limiters, it was able to break a grown, trained man's arm with a single kick, destroying the ground around her with through the sheer force of the attack.[10] It also mentioned that it would be able to catch up with a fast driving car within 180 seconds, sacrificing 70% of the muscle fibers in both of her legs in the process.[10] Despite her revival, Hasami has never been shown to use her esper ability.

Hasami debuts in chapter 6 of the 4koma gag manga alongside Esther Rosenthal. Attending the Accelerator idol concert on her own, she notes that her fellow concert-goer, Esther, had a strange way of waving her light stick. When Accelerator uses his wing in the concert, Hasami is so awestruck that she dies. Esther then accidentally inserts an artificial soul into her and becomes Hasami's master.[11] From then on, Hasami accompanies Esther in her misadventures as a fan of the idol Accelerator, acting as a straight man to her shenanigans. 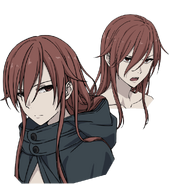 Retrieved from "https://toarumajutsunoindex.fandom.com/wiki/Hitokawa_Hasami?oldid=193027"
Community content is available under CC-BY-SA unless otherwise noted.