The Honours of Scotland (オナーズオブスコットランド, Honours of Scotland?) are a set of royal treasures associated with Scotland. It consists of three regalia; the Sword of State (国家の剣, Sword of State?), the Coronation Crown (即位の冠, Coronation Crown?) and the Ruling Sceptre (統治の笏, Ruling Sceptre?), used in the coronations of Scottish monarchs together with the Stone of Scone (スクーン石, Sukūn Ishi?).[1]

The Sword of State is a doubled-edged sword with a gilded side and hilt, sheathed in a wooden scabbard.[2][3] Its hilt has leaf-like decorations on the guard and a round pommel.[3] The Coronation Crown has a gold frame containing red fabric, described as looking like something from a fairy tale. The Ruling Sceptre is a silver staff gilded with gold leaf.[2]

The Honours of Scotland are the Scottish royal treasures, together with the Stone of Scone,[1] and were used in the coronations of Scottish monarchs. The Honours consist of three regalia; the Sword of State, the Ruling Sceptre and the Coronation Crown.[1]

The three regalia and the stone, a combination of three and four, form their own magical system, similar to the system symbolically rooted in the three power, four region structure of the United Kingdom and governed by the Curtana. As the spiritual items form an alternate foundation for the control mechanism, they can be used as an alternative control for the UK's magical system, though this is only possible if the Curtana's control is unstable.[1][2] When describing the situation, Qliphah Puzzle 545 described it as another system running in parallel which could be used to enter the mainframe rather than a backdoor to the main system.[1] All four items are required in order to use the Scottish system,[1][2][7] and using their power to its fullest requires a ceremony performed at a point between the centers of the UK's four regions (England, Scotland, Wales and Northern Ireland) - in the middle of the Irish Sea.[8][7][9] At this point, the ley lines can be accessed most efficiently for the purpose.[10][11]

Kept at Edinburgh Castle, they are stored deep underground in a trap-filled labyrinth extending from St. Margaret's Chapel, with replicas on display in the main castle for tourists. The storage chamber is a great hall which seems too big to be underground and only grew that large to contain everything needed to store the four items.[1]

During the attack on the Queen Britannia, Coronzon used the Honours of Scotland and the Stone of Scone in conjunction with the enhancing effects of the Queen Britannia's temple to launch a massive barrage against the attacking forces.[12][13] A single volley had four types of attack from the four items, with 100,000 shots of each, capable of accurately shooting roughly 400,000 targets simultaneously.[14][12][13] Index's analysis suggested that the different symbols used for the bombardment were derived from Magick, based on the Golden Dawn's traditions and Aleister Crowley's interpretations; the sword being 'that which determines the direction of power', the sceptre 'that which guides the cudgel’s blow' and the crown 'that which supports the spell from Keter'.[13] While Stone of Scone didn't have an entry in the correspondence table, Index predicted from the legend that 'when the true king stands upon it and raises their voice, they shall prophesy' that it would involve a wide-range shockwave attack or an accurate attack guided by prophecy.[13] The different varieties included attacks which flew in horizontally (possibly the Sword of State's effect), invisible impacts sweeping across horizontally (possibly the Ruling Sceptre), white beams of light raining down from above (possibly the Coronation Crown), and explosions and shockwaves taking randomly bending paths (possibly the Stone of Scone).[13]

The Honours of Scotland and the Stone of Scone were long used for the coronations of Scottish monarchs. During the English invasion during the First War of Scottish Independence, Edward I took the Stone of Scone away and sealed its functionality. When the Curtana system was being set up, there was a concern that the Scottish treasures would interfere with it.[1]

In recent years, the Stone of Scone was returned to Scotland.[1] In the present day, the Honours of Scotland and the Stone of Scone are stored in Edinburgh Castle, with replicas on display for the public and the actual treasures kept underground.[1][2]

Following the damage sustained by the Curtana Second from its clash with the Curtana Original during the British Halloween, the United Kingdom's Curtana-controlled magical system was left unstable, creating an opportunity where the Scottish royal treasures could be used to hijack the country.[1][1][2] During the Crowley's Hazard invasion of the United Kingdom, the British Royal Family was evacuated to Scotland during the attack on the London, with Edinburgh Castle as the destination - one of their reasons for heading there was likely to prevent the Honours of Scotland and the Stone of Scone from falling into enemy hands.[2]

After freeing herself from her contract with Samuel Liddell MacGregor Mathers and burning his remains, Coronzon attempted to steal the Honours of Scotland and the Stone of Scone from Edinburgh Castle in order to hijack the United Kingdom's magical system and act as the ignition for the Ceremony of Mo Athair.[1] Easily defeating the royals and knights, and easily getting through the labyrinth with her knowledge from being the Archbishop of the Anglican Church, she initially obtained the Ruling Sceptre, Coronation Crown and the Stone of Scone but found the Sword of State missing. The sword had ended up in the hands of Hamazura Shiage, but he agreed to assist Coronzon in exchange for her help in bringing back the recreated Dion Fortune.[2]

The two transported the four items from Edinburgh, initially by rail and then on foot after interference from Lessar, Accelerator and Niang-Niang.[15][16] Arriving in Dumfries, they boarded the hijacked Queen Britannia,[17] and on reaching the inner temple, Coronzon positioned them before carrying out a banishing ritual to remove influences from the site in preparation for the ceremony.[18]

When the British forces attacked the Queen Britannia in order to thwart the ceremony, Coronzon weaponized the Honours and the Stone in order to bombard them, with the British creating decoys from the artificial ice covering the Irish Sea to draw fire and minimize their casualties from the barrage.[12][13] Later as her enemies cornered her, despite not being at the ideal point, Coronzon attempted to use the treasures to activate the Scottish system and hijack the United Kingdom in order to begin the Ceremony of Mo Athair, but the command sent towards Scotland through the ley lines was rejected by an original spell created by the revived Dion Fortune using the essence of her fellow Golden Dawn recreations.[9][19][20][11]

Following Coronzon's defeat, Mina Mathers recovered the treasures from the sinking Queen Britannia and returned them to Queen Elizard.[21] 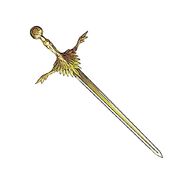 The Sword of State as it appears on Shinyaku Toaru Majutsu no Index Volume 22's back cover.
Add a photo to this gallery

Retrieved from "https://toarumajutsunoindex.fandom.com/wiki/Honours_of_Scotland?oldid=193813"
Community content is available under CC-BY-SA unless otherwise noted.