The HsB series are supersonic stealth bombing planes that are developed by Academy City. All currently known iterations have a top speed of 7000 kilometers per hour.

HsB-02 is apparently the 2nd iteration in the HsB series of supersonic bombers, and is the first one seen chronologically being used by Academy City. The HsB-02, though it is unknown of the previous HsB, the HsB-02 was created using technology the Supersonic Passenger Plane that Kamijou Touma and Tsuchimikado Motoharu had taken to Avignon. The bombers are so fast that they can shake off a missile just by flying straight through the use of pure speed alone (as it cannot make sharp turns), as well as go from Japan to France in just under an hour.[1]

It's length varies but it is considered to be around, most often,[2] as at least 80 meters long to 100 meters.[1] Due to its large size and the incredible speed it takes, which approaches 1000 degrees on full speed, the HsB-02 has a built in cooling system, using liquid oxygen and hydrogen, which are also used as fuel, coolants that are flowed through pipes in the entire plane.[3] Its frame is the basis for HsF-00 planes.[2]

Although used as a bomber, the plane is large and capable enough of transporting large objects, such as Powered Suits like the HsPS-15,[1] goods, and people. The aircraft is operated and maintained by a conventional crew.[3]

As it is a stealth bomber, it is equipped with conventional bombs. However, it has some other weapons:

For the equipment variation known as Style 3, the HsB is loaded with various explosives, including special bombs which can destroy facilities deep underground and Synchronous Multilayer Bombs to destroy only a designated area, collectively capable of annihilating a manmade island.[4]

HsB-07 is the updated version of the HsB-02s that were used in World War III. The most notable change in the design of the bomber is its borrowing the operating mechanism of the HsF-00, where most of the pilot's body is frozen to protect the pilot from the massive Gs the aircraft is subjected to. With this, the pilot need not use their fingers to operate the aircraft and need not use their mouths to communicate with their allies. The distribution of blood in the pilot's brain, the amount of chemicals secreted, the flow of electronic signals, and monitoring of the active regions of his brain with sonar were some of the methods of directly gathering information from his brain. The accuracy of each method was low, but that could be overcome by using multiple methods. The technology had also begun to be used experimentally in intelligence and criminal investigations.[5]

It is unknown if they still retained Earth Blade, but since they're bombers, their primary function was to drop bombs upon their targets. They can use conventional guided bombs as well as chemical warheads.[5]

Academy City has broken agreements with the Japanese government regarding the manufacturing of bombers at the time of the Avignon incident.[3] It is unknown if this agreement has been reestablished or if Academy City had to answer for it breaking the agreement.

During the attack on the Liberal Arts City by the Return of the Winged One, while Academy City students were there on a field trip, several HsB-02s were put on Level A Standby and lined up on one of School District 23's runaways, loaded with the Style 3 variation of bombs and a prototype AIM sensor on the nose to detect a specific esper, though it would only detect one at Level 5 strength from its performance and the height of the planned bombing. If sent out, they were intended to annihilate the island while only recovering Misaka Mikoto, however in the end they weren't deployed.[4]

The HsB-02 was first deployed during the suppression of Avignon, carrying HsPS-15. Here, they used the Earth Blade, destroying several structures in the city, and later would've bombed it if not for Accelerator's vote to change the plans.[3]

As part of the Academy City military, the bombers were sent to World War III, bombing several targets in Russia as well as deploying Powered Suits as well as other units and supplies onto the battlefield. On October 30th, Mugino Shizuri was taken into one of the bombers to be dropped off into Russia, as well as Misaka Mikoto who hijacked one of them.[6] Following the rise of the Star of Bethlehem, a number of them were cut down by the summoned Archangel Gabriel.[7][8]

HsB-07s were deployed during Academy City's supression of Baggage City, using them to cripple the city through bombing of important locations. Several of them, most notably one being piloted by Rokudou Ryuuichi, were later destroyed by Marian Slingeneyer's magical artifact, Loki's Net.[9]

Supersonic bombers were deployed by Academy City during GREMLIN invasion of Tokyo to Academy City directly toward Sargasso, GREMLIN's base, but were intercepted and supposedly swept away by Mokkerkalfe waiting for them and under the control of Ollerus, who was forced to keep on the ruse of being Thor.[10] 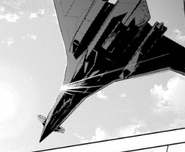 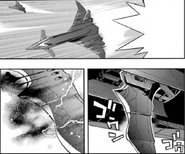 Retrieved from "https://toarumajutsunoindex.fandom.com/wiki/HsB?oldid=155735"
Community content is available under CC-BY-SA unless otherwise noted.