The HsPs-15, also known as Large Weapon (ラージウェポン, Rāji Wepon?), is a Powered Suit developed by Academy City. Large and bulky, it became prominent and in wide use in the Toaru Kagaku no Railgun and Toaru Majutsu no Index anime despite being referred to as a prototype in the novel.[1]

It is officially used by MAR, primarily for clean-up[2] and rescue purposes.[3]

It is large and bulky. The Powered Suit is described looked more like a slightly thicker Western suit of armor. The helmet was almost 50 centimeters wide and cylindrical in appearance.[4] It was somewhat humanoid in appearance, with two arms and legs and five fingers on both hands.[5] The Powered Suit has a container affixed on its back, appearing like a backpack, which is used as automatic reloader for the shotgun the machine is equipped with.[6]

The Powered Suit comes in a variety of camouflage patterns such as blue and gray, even pink, which is used by Therestina Kihara Lifeline,[3] or even of plain color, such as the ones that appeared before Accelerator with the GROUP recruiter that were brown in color in the anime adaptation.[7]

However, the above description of its size relative to the width of the helmet fits one of the various sizes of the Powered Suit, as it came in various standard sizes.[5]

Developed using all the best Academy City technology, the Powered Suit was a new Academy City weapon (at that time of its introduction in the novel, early October) that covered the body in armor. The joints were moved using electric and the human pilots inside was given mobility from twice normal to dozens of times normal. The Powered Suit came in various standard sizes and levels of firepower. The ones that attacked Avignon were 2.5 meters tall. The cylindrical head was large, and connected directly to the chest of the machine, though was able to rotate.[5] Although the armor looks thin, they should be able to take an anti-tank missile straight on, according to Tsuchimikado Motoharu.[8]The Powered Suit has tremendous jumping power, able to leap 10 meters through the air.[8]

Powered Suits can be installed with an AI to make it work without a pilot, as with the case when Acqua of the Back was attacked by Powered Suit, though it is unknown if they were HsPS-15 Powered Suits.[9]

The shotgun, which looks like a DefTech 37mm launcher,[10] is the main weapon of the HsPS-15 Powered Suit. The special guns are described as having barrels so wide they looked misshapen. They appear as large rifles as if made by forcibly shortening the barrel of a tank's main gun. They are anti-barrier revolver shotguns, which use special shells. Each shot could blow straight through a tank and at close range a few shots could force open the door to a nuclear shelter. The barrel of could hold up to the explosive force of the gunpowder by delicately controlling the type and arrangement of the gunpowder. There, the direction of the explosive force could be controlled so that the lowest possible amount of damage was given to the barrel and the greatest possible amount of destructive force was released.[5]

Despite the destructive force that a single bullet a HsPS-15 could use, the shotgun can be equipped with different type of shells. Kamijou Touma speculates just as the Powered Suits attacked civilians in Avignon that the shells could have been divided between the even and odd chambers in revolving cylinder, and it rotated two chambers at a time. That way, it could be changed between odd mode and even mode. Furthermore, the gun can shoot blanks, but the shock wave from the great explosion this caused was enough to knock the oxygen from a person’s lungs and knock them to the ground,[6] as well as shatter car windows and bend metal.[8]

To reload, the pilot can simply connect their shotguns to the backpack-like part on their backs to automatically reload.[6]

The Drive correction device (駆動補助装置, Kudō Hojo Sōchi?, Yen Press: drive compensator) is a device installed in the Powered Suits that allows the driver to study the conditions of the battlefield and automatically regulate everything to bring out the greatest performance. The Powered Suits can scan the environment around them and automatically correct their performance for it, so they could be used in their default settings anywhere in the world. The information is then transmitted among all the Powered Suits present during a mission. They are described as being able to walk across ground even better than a real person could because of this.[8]

One weakness of this device is that there is a security hole that slows down the system's decision-making ability when it simultaneously receives multiple contradictory conditions. The reason for this is that the Powered Suit is a prototype that had only recently made it to the point that it could be shown at exhibition. Moreover, if the version of the Powered Suit that was used was made to share its environmental data with the other suits, it could mean that an error in one suit could affect all of them. The error renders the machine to be inoperable and unable to move. It requires the pilot to manually change the settings on the escape equipment to even get out.[1]

The existence of the HsPS-15 is used to demonstrate Academy City's military prowess to the world as a diplomatic tool, an example of this is during the Interceptor Show,[4] as well as on the field in Avignon, and in selling them as downgraded versions for the "outside".[4]

Moreover, the very absence of the Powered Suit in the City due to their deployment to Avignon was reason enough for various underground factions to move against Academy City, indicating the importance it has in safeguarding the City.[11]

Haimura had the most trouble in the design for the HsPS-15. After realizing that the suits were worn like a "suit," rather than a piloted, and had trouble with the anatomy of a man wearing robotic suit. After several drafts, Haimura finally settled on a design, getting the idea from Overman (King Gainer), and making it like man-made muscles, chanmail, and plate armor, worn over a human framework. With little time to spare, Haimura managed to finish the design for their weapons.[12] 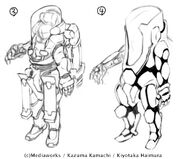 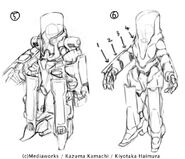 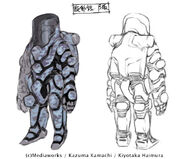 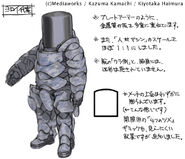 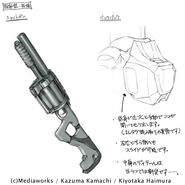 Retrieved from "https://toarumajutsunoindex.fandom.com/wiki/HsPS-15?oldid=205322"
Community content is available under CC-BY-SA unless otherwise noted.