Stop the upper classes including the Board of Directors from getting out of hand.[1]

In its original incarnation, had several members supporting the 4 field operatives.

School District 7, Academy City
ITEM (アイテム, Aitemu?) is an Academy City-based organization whose primary function was to monitor the upper echelons of the Academy City, including the Board of Directors and prevent them from gaining too much power and getting out of hand.[1] Its incarnation, as seen on October 9, was virtually destroyed during the events of that day despite only one operative being confirmed to be killed (Frenda Seivelun) and the rest just indisposed or their status unknown, and was later reorganized to form a new organization with the remnants of MEMBER, SCHOOL, and BLOCK.[2]

After the events of World War III, Mugino Shizuri reconciles with the remaining members and reforms the group. The organization becomes the only known faction from the Dark Side of Academy City that fought in the factional war on October 9 to have not been disbanded after the war.

Like the other Dark Side of Academy City factions their level of security and authority are the same—an unofficial unit created by putting few persons together.[3] As their primary role was to watch over the upper classes even the Board of Directors, it is unknown exactly how they are ordered around. Regardless, the ITEM liaison is the one who gives them missions, and is often in contact with the other liaisons,[4] though their relationship is casual enough that Mugino can ignore an order.[5] Moreover, not only do they guard the higher-ups, they also take missionary work like the ones they did for STUDY.[6] They are also used in eliminating elements of unrest within Academy City, as when the liaison asked them to check out the attack on the Virus Isolation Center in School District 5,[5] or when they tried to prevent SCHOOL from assassinating Oyafune Monaka by killing their sniper.[1]

Like the other organizations, they seem to have a subordinate organization of grunts to do menial tasks for them.[7] They are used to assist them in missions,[8] be their gofers like Shiage, conceal their operations,[9] and destroy evidence, which probably includes collecting the corpses of the dead members of ITEM.[10]

It is implied by the ITEM liaison however that Rikou's entry into ITEM with Mugino Shizuri giving her Ability Body Crystal was unbeknownst to them, likely part of the research on Rikou.[11] Due to her knowledge in the inner-workings of Rikou and her AIM Stalker,[11] it is likely that the ITEM liaison was the one recruited her into ITEM for this purpose.

At different points in the story each member of the team used "items" to assist in their abilities or allow them to fight. Kinuhata Saiai, in order to compensate for foes who prove to be able to eliminate naturally-occurring nitrogen in the air like Stephanie, Saiai carries around a small canister of liquid nitrogen for use at all times.[12] Takitsubo Rikou needed the Ability Body Crystal in order to activate her ability.[13] Mugino Shizuri carries Silicon cards that allow her to spread the area of effect of her Meltdowner beams.[7] Finally, Frenda Seivelun rely almost entirely on bombs, weapons, and other tools.[14] In addition to this, Hamazura Shiage also relies on weapons and items after he joins.

Prior to December 4th of the current year, ITEM had one main bank account from which reward money was distributed to the members' individual accounts.[15]

While Mugino Shizuri is the field leader of the team and the ITEM liaison is the one giving orders, according to Kakine Teitoku, Takitsubo Rikou is the core of ITEM.[16] This is backed up by Kinuhata Saiai. She states that if Rikou is killed, ITEM will be restricted as she is the one that determines if they are the chasers or the one being chased.[17] Superior firepower from having a Level 5 can be matched using other means, but a tracker like Rikou is near irreplaceable.

ITEM's backer realized that ITEM could not function with only Saiai left in fighting condition,[19] and was tasked to remake a team using the few surviving members from BLOCK, MEMBER, SCHOOL and ITEM.[2] 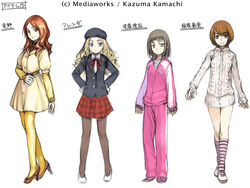 Concept art of the girls of ITEM, by Haimura Kiyotaka.