Toaru Majutsu no Index Wiki
Register
Don't have an account?
Sign In
Advertisement
in: Characters, Science Side Characters, Espers,
and 2 more

She has short red hair, and despite her normal appearance, wears a white flu mask with two dark crossed hands printed on it.[8] She also wears a short-sleeved shirt, shorts, mismatched black tights and a backpack.[9]

As the leader of the Scavengers, she reins in the oftentimes the excitable and vicious nature of her colleagues. She has a habit of recruiting anyone who looks promising or she has taken a liking to,[1] as shown by her trying to recruit Accelerator despite being his enemy.[6] She tends to panic in bad situations, particular when it involves the Level 5s.[6][7][1][10]

After working with Mikoto, a fan of Gekota, and using themed communication badges, Leader becomes interested in Gekota as well.[11]

Leader was abused by a teacher in her past, and as such has a strong resentment for them and "teacher's pets" as well, leading to her belief that eliminating them is justice. This is a trait shared with all the members of Scavenger.[1]

When Nakimoto Rizou realizes that DA has become a problem, he contacts the Scavenger mediator to eliminate the group. The mediator wakes them up and announces them through an intercom that they have a job to do.[3]

They succeed in not only destroying DA's forces but also killing several innocent Anti-Skill personnel.[9][4] Later, after defeating DA's Tarantula, they come across Esther Rosenthal and Hitokawa Hasami defending Yomikawa Aiho and Misaka 10046.[5] As she and the other despise teachers like Aiho, they also despise "teacher's pets". With Leader calling the shots, Esther tries to contend against them with Hasami. However, Scavenger is too powerful for them

despite all their efforts. It is not until the arrival of Accelerator that the tide of battle turns, with him making quick work of the Scavengers. Seeing him, Leader tries to recruit him, but is turned down and soon after, to her horror, discovers that they are up against Academy City's first-ranked Level 5,[6] freezing up completely despite Yakumaru's efforts to snap her out of it. After the other Scavengers are easily defeated, Leader is left alone before Accelerator, wetting herself out of fear before passing out.[7]

Thinking that the smashed doppelgänger is now harmless, Leader groans in pain and Yakumaru prepares to make a painkiller for her. However, the doppelgänger gets up again and demonstrates a new ability to control other materials, including Naru's paper armor. The doppelgänger is now too powerful for them to defeat, so the three of them decide to flee. Leader decides to find Seike, only for Misaka Mikoto (who has just defeated Seike) to approach. Terrified at meeting another Level 5, Leader thinks quickly and persuades Mikoto to work together with them.[1][14][16]

Leader sends Naru and Yakumaru to pick up the unconscious Seike while she remains with Mikoto. When asked about who she works for, Leader lies to Mikoto that they're from Judgment and hands her a fake Judgment armband as proof. Mikoto is skeptical because of how aggressive Seike was, so Leader claims that Seike is a civilian working with Judgment. Mikoto has a phone call with Shokuhou Misaki and Leader is even more terrified at the prospect of a second Level 5, especially since Misaki's ability would let her see through Leader's deception. She gives an excuse to prevent Misaki coming there. She then praises Misaki extensively to get on Mikoto's good side, though this has the opposite effect. Leader then gives Mikoto a Gekota communicator so they can keep in touch, and is relieved when Mikoto happily accepts it. They then track down the doppelgänger.[10][16] Mikoto fights the doppelgänger but is forced to flee while carrying Leader (who loses her mask in the process).

Leader uses her ability again and finds out where the doppelgänger is going. She suggests redirecting the doppelgänger to a less inhabited area which only has some Skill Outs. She is surprised when Mikoto asks for the Skill Outs to be evacuated, then remembers that she's pretending to be part of Judgment. Leader thus calls her team to handle the evacuation, then tells Mikoto to start redirecting the doppelgänger. Leader rejoins her group at an abandoned warehouse where they meet their employer. The doppelgänger and Mikoto break in, as planned by Leader, and Leader uses the threat of the doppelgänger to coerce the employer into signing off on their job. She then flees with the rest of Scavenger. She thinks back on her experiences with Mikoto and feels guilty.[17][16]

Meanwhile, the doppelgänger is defeated by Mikoto and flees to an airship in the sky. Ryouko arrives and is taken up to the airship to negotiate with the doppelgänger, and Mikoto climbs up after them. Mikoto is unable to save Ryouko when she jumps off the airship, but Leader calls her and tells her to leave it to them. Leader locates the falling Ryouko and directs Naru and Seike to save her. Mikoto thanks Leader, to which an embarrassed Leader replies that she doesn't need thanks as they are working together.[18]

Leader tells Mikoto of the doppelgänger's location on the airship. She, Mikoto and Misaki (via phone call) work out that the doppelgänger's power comes from self-replicating artificial muscles.[19] Leader supports Mikoto from the ground as she battles the doppelgänger, resulting in Mikoto and the doppelgänger crashing back to the ground. Ryouko then arrives at the scene, followed by the chief scientist of the project, and she is shot in the ensuing confrontation. Leader tells Mikoto (via the communicator) that she'll contact a hospital and that Seike and Naru will be there soon.[20] In the anime, Mikoto only allowed her to contact the hospital, with Kuroko going to her current location instead.[21]

After the operation is over, Leader holds a meeting with the rest of Scavenger to discuss how they can improve the team. Naru suggests getting a new member so that they're similar to a sentai team, but the others disagree with this. They receive a call from their liason and Leader answers. When told that they aren't getting paid since the client went out of business, Leader isn't satisfied and demands compensation for risking their lives. She convinces the liaison to return their rank to normal. Yakumaru congratulates Leader on this achievement and starts throwing out old equipment. But when she asks about the Gekota communicators, Leader says that they are still usable.[11]

Leader and her group take part in a jailbreak trial, a competition to test the security of a private juvenile hall by attempting to break out a fake prisoner. After passing the exterior wall, Leader orders Yakumaru to support Mikoto's group (who are also competing). She claims that this is to steal the fake prisoner from them, and plans on having the rest of the group hide by the exit.[22]

While waiting, Leader worries about what Mikoto will think when they steal the prisoner from her. She thinks that Mikoto owes her for taking Kuriba Ryouko to the hospital, but then wonders if she should split the prize money 50/50. Later on, she hears an announcement that the trial is over and is shocked.[23]

Leader's esper ability is Level 3 Predator (, Chōkan Hāku (Puredatā)?, lit. "Bird's-eye Grasp"),[1] which allows her to look for a target, apparently with no regard for distance.[9] When she uses Predator, she covers one of her eyes, and as the ability activates she sees numerous eye shapes in the sky. The eyes are colored red in the Accelerator anime,[24] but are colored gray in Railgun T anime.[13] When the target is found, the eyes move toward that direction.[9] The effectiveness of the ability is reduced during the day, however.[1] 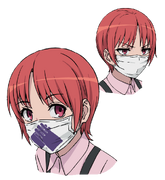 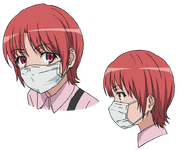