Imaginary Fest (story mode only)
Jane Elves (ジェーン＝エルブス, Jēn Erubusu?) is a Witch of the Anglican Church, and operates under the command of Stiyl Magnus. She makes her debut in Toaru Majutsu no Index Movie: Miracle of Endymion with two others, Mallybath Blackball, and Marie Spearhead.

She appears to be a young girl with long green hair. Her outfit consists of a hood with cat ears on top and revealing clothes leaving most of her front side exposed, covering only slightly her breast, which is aided by her small cape, covering her neck and much of her shoulders and above her breasts. Moreover, her dress has long pointy coattails. Only her black panties cover her crotch. Like the other two she wears stockings but her garterbelt is exposed.

Like all the girls, she wears the Cross of St. George on her person.

Serious in her missions, Jane is described as having a complex related to her height,[1] which shows during the chase scene where she complains to Stiyl about smoking as it will stunt her growth.[2]

Little is known about her, but Jane and Mallybath seem to be subordinate to Marie. She calls Stiyl as teacher not out of respect, like all the others, but because she is making fun of him. She and the others taught themselves magic but got stuck in their learning. There, they plotted to add rune magic to their abilities to solve their problem,[3], they most likely approached Stiyl for this reason.

She and the others first appear monitoring Meigo Arisa while she is with Kamijou Touma and Index in the batting cages.[4] She attacks up on an entablature, after both Marie and Mallybath had successfully setup their spells against Touma. Despite their coordinated attack, they are unable to contend against the combined power and Touma and Index.[4] Because she is far away, she is unaffected by either the Imagine Breaker or Spell Intercept.

When Stiyl arrives, and much later, the Black Crow Unit or the Civil Affairs Resolution Mediation Unit commanded by Shutaura Sequenzia, they are forced to retreat after Kanzaki Kaori demands them to.[4]

Later, Jane alongside her partners kidnap Arisa at a local restaurant, and make a run for it in a car along with Stiyl. Here, she warns Stiyl about cigarette smokes stunting growth, to which Stiyl replies that it is all right since he has grown enough. But Jane says that she is referring to herself. Then, they are suddenly pursued by Shutaura and her men. Jane helps Stiyl summon Innocentius using her wind magic along with Stiyl's rune cards, and knocks away most of their pursuers. But Shutaura attacks and overturns their car, making everyone inside fall unconscious, and prepares to re-capture Arisa. But Touma appears on the scene with some help from his teacher, Komoe. Touma tries to reason with Shutaura but plans to blow up everyone on the highway after recovering Arisa. Stiyl protects his students from the explosion while Touma gets the full blast.

Jane, and the others along with Stiyl prepare for their final mission, stopping the destruction of Endymion. They fight off the automated security system, which injures Stiyl in the progress. When they reach the energy pillar they are confronted by one of Ladylee's henchmen. But Stiyl quickly takes care of her with Innocentius destroying the pillar along with their obstacle. With its destruction Stiyl grabs the girls and make a quick getaway. Jane is last seen with a hospitalized Stiyl alongside Marie and Mallybath.

Jane uses magic related to wind channeled through her fan. It seemed to have no direct attack applications, other than forcing objects to become projectiles by flinging them with her wind, like what she did in combination with Marie's water spears or use a wall out of wind to protect her and others.[4]

Like Stiyl, the girls can apparently set up a people-clearing field,[4] and somehow set-up a rune card to display like a television camera.[2]

Kamachi states that he initially she and the others were supposed to be like dolls whose faces could not be seen, but changed his mind after Haimura's designs were "just too cute".[3] According to Haimura Kiyotaka, Jane was designed around the motif of an elf.

Character design and sketches by Haimura Kiyotaka for Toaru Majutsu no Index Movie: Miracle of Endymion. Jane is in the right. 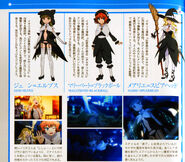 Column of the three witches from the movie booklet: "Magician who belongs to the Church of Necessary Evil of the Church of England. Disciple of Stiyl, who participates on the attack of Arisa with him. Is good at using magic techniques that uses the element of wind. She has a little complex due to her lack of height."

Jane singing karaoke with Marie and Mallybath by Haimura Kiyotaka.