Kamijou Touma (上条 当麻, Kamijō Tōma?) is the main protagonist of the Toaru Majutsu no Index series and an important character in the Toaru Kagaku no Railgun series. As a Level 0 Academy City first-year high school student, his point-of-view allows the audience to become acquainted to the mysterious world of Toaru Majutsu no Index, and is mostly involved in the events of its Magic Side.

He possesses the mysterious "Imagine Breaker" in his right hand, which is capable of negating all forms of magic, esper powers, and other divine abilities. This, according to Index, even includes his own good luck, as they are the blessings of God.[6]

He has a very strong desire to aid all those who are in need even if it means putting his life on the line and will not hesitate to challenge an opponent who is several times more powerful than himself. Because of his willingness to help others unconditionally, he has attracted the affections of many characters in the series, which Himegami Aisa jokes about, stating that his life is like a dating simulation where he is bound to unlock more paths to more girls.[7]

On its own, Touma's name spelled in kanji doesn't mean anything special. However, when other characters reference the pronunciation of "Kamijou," it takes on different and seemingly coincidental meanings. When Touma first meets Kanzaki Kaori, she believes his name means (神浄討魔) in kanji as opposed to (上条当麻). Kanzaki's interpretation translates to One who Purifies God and Slays Demons. (Yen Press: The Magic Slayer of God's Cleansing)[1]

Later in Volume 14, Touma's family name "Kamijou" (上条) is mentioned to be homophonous to La Persona Superiore a Dio (神上) in Japanese. The author's Afterword section also mentions a tantalizing hint on what the difference is between these two possible alternative translations of Touma's name, though in-universe none of the characters have noted the similarity as it is obviously in a different language.

Finally and possibly coincidentally, another interesting case is that Touma's given name is homophonous to 透魔, which can be translated as "Invisible Demon." This is interesting as Touma wields an incredibly powerful and invisible force in his right arm which is temporarily released if that arm is severed, one so powerful that even Fiamma of the Right feared it.

Touma looks like an ordinary high school student except for his most striking feature, his spiky black hair. It's been mentioned that his spiky hair isn't natural, but he made it that way using hair gel after seeing it on a fashion magazine.[8] He also has black eyes.

His father remarks that Touma looks just like his mother when he is worried about something or is thinking deeply.[citation needed]

Following the attack on the Queen Britannia and his temporary loss of Imagine Breaker, Touma briefly had a sky-blue arm in place of his normal right arm, which could unravel and surround his body in the form of a dragon - a sky-blue and lemon-yellow winged lizard with crocodilian jaws, giant bat-like wings and a thick tail.[9]

Touma is the son of Kamijou Touya and Kamijou Shiina, who live outside of Academy City. During his childhood, he was often seen as a jinx because of the misfortune that his right hand creates and he was called "god of pestilence" by people around him. Once, a bankrupt and superstitious person blamed Touma for his own misfortunes and tried to stab him. A TV station heard about the incident and tried to make a supernatural show based on Touma, as well as releasing images of him without his family's consent. Because of this, Touma's father sent him to Academy City when Touma graduated from kindergarten, as it was a place where many unique and gifted people lived free from superstition and Touma could be free from the kind of things he had experienced back home.[2] This, however, was somehow a deliberate plot by Aleister Crowley to bring Touma into the City, and one of the most obvious effects of this is the birth of Kazakiri Hyouka out of fear of the Imagine Breaker.[10]

However, during his time in Academy City as a child, Touma wrote letters to his father; from there, he determined that even in the city of science, people still treated Touma differently due to his terrible luck.[2]

According to Tsukuyomi Komoe, Touma used to be a "naughty boy" in the past.[11] It is also during this time that Touma discovered that his right hand can somehow dispel supernatural powers, specifically the psychic powers used by the students of Academy City. This power, named Imagine Breaker, was only known by a few of Academy city's high-ups, especially by Aleister Crowley and Heaven Canceller. Since then, Imagine Breaker was secretly held as a power of great importance, despite Touma himself being officially classified as a Level 0.

Touma is treated as a precious person by his current high school classmates due to all their bad luck being attracted to him, as shown when they rejoiced upon hearing that Touma forgot his homework.[12] Because of him, they get off lightly from things such as the teachers being annoyed at them for not submitting homework. This is unlike how Touma's life was before he entered Academy City, raising the question of whether Imagine Breaker's power was sealed away sometime between him entering Academy City and the present day, seeing how the bad luck affects Touma alone instead of before when it also influenced the people around him.

However, Touma's classmates, mainly the male students, do resent Touma for one thing – his impossibly good luck at getting girls' attention. This is due to many girls sympathizing with Touma's bad luck, and has gotten to the point where Fukiyose Seiri, the only one who is critical of Touma's lazy attitude to life, is called the 'Girl of Steel Walls' and 'the Girl who is completely wary of Touma'. Many of Touma's classmates say, "Though Touma keeps saying he's unlucky, he has the best position," and joke about if nobody can stop Touma, humanity will end due to him taking all the girls[13]. Surprisingly, Touma still hasn't gotten into a serious romantic relationship even with this kind of female attention. This is possibly due to his friendship with Tsuchimikado Motoharu and Aogami Pierce, the latter often joking of supporting Touma to build a harem that covers every type of fetish imaginable[14]. Touma said he'd break Aogami and Motoharu's fantasies on this topic using his Imagine Breaker. Motoharu has named Touma's 'ability' to get girls chasing after him without much effort as the Kami-yan disease, and applied this to Stiyl Magnus after hearing about how Stiyl got chased by Tsukuyomi Komoe and couldn't even throw her off easily using the 'Opila' runes. Komoe also once half-seriously said he might have an esper ability (AIM diffusion field) that causes girls to trickle down to him.[15] Most people around him, such as Index and Misaka Mikoto, consider it "normal" for him to have girls around him and are usually quick to jump to conclusions about what he's doing (or done).

Due to Touma being a Level 0, he has to take even more make-up lessons than usual as he does not have the required academic achievements. This does not mean that Touma is unintelligent, as in many occasions he has shown quick thinking in combat. Lessar even outright stated that Touma is extremely smart in some aspects but not others.[16] It is also shown that Touma at least has a good grasp of physics, being able to calculate the flight path of an HsB-02.

Even before the start of the series, Touma could not ignore someone in trouble and would help people regardless of who they are. Indeed, this is how his life is intertwined with Mitsuari Ayu and Shokuhou Misaki. Ayu is a girl who was at an impasse in her development as an esper and attempted to commit suicide in Ground Geo on the same day as Touma met Misaki.[17] He would've been able to save her if not for him dropping his cellphone when he ran into Misaki[17].[18] Touma would later visit Ground Geo as it was the sight of Ayu's suicide attempt and there he met Misaki again, inadvertently preventing her from erasing her own memories out of depression.[19] They would later meet up several times, with Touma giving her a cheap whistle.[20] Their relationship could be compared to that which later developed between Touma and Mikoto — acquaintances that often run into each other in the city.[21] Touma later protected Misaki from Deadlock by using his own body as a shield. The result of this encounter is also quite similar to that of Touma and Index, ending with Touma losing his memories of Misaki, though this case is different in that Touma also received anterograde amnesia specific to her (any new memories he forms of Misaki are soon forgotten).[22]

As for Mikoto, Touma first meets her when she was being harassed by thugs. At first, she was impressed that he was the only one who was willing to come to her aid (even though she could have handled the thugs all by herself). She then became annoyed by him after he accidentally insulted her, resulting in her discharging a powerful amount of electricity at the thugs as well as Touma, though he was unaffected because he used his right hand[23][24]. This became the catalyst that made her consider him someone she must beat. For some time, Mikoto continually stalked Touma demanding him to fight her, even though she was still unaware of the power of his right hand.

Touma lives on the seventh floor of his apartment building.[7]

So far, only a few people know the truth about Touma's memory loss. They are Heaven Canceller (who took care of Touma after the incident in which he suffered it), Terra of the Left (deduced it from Touma's lack of knowledge about Imagine Breaker), Misaka Mikoto (overheard the conversation between Touma and Terra), Fiamma of the Right, Index (from Fiamma telling her), Kumokawa Seria (she implies this in the Love Letter SS, but it's unclear how she learned of this) and Mitsuari Ayu (she tells Misaki that Touma's memories have been lost beyond their powers, but it's unclear how she learned of this).[25][26] Shokuhou Misaki also knows about Touma's memory loss, but only about the one he suffered after he saved her in the past. Whether she is aware of his last one or not is unknown.

The preliminary design for Touma had looked more adult, but was changed later on to fit the story and because his size would not fit the light novel illustrations. This would be a common problem for Haimura, who redrew Touma several times to change his head-size ratio[27]. Even until volume 2 he was still not satisfied with the design[28] and kept changing Touma's design to a more deformed look that would be apparent in the later novels.

By volume 12, with the change of the season in the setting, as well as the change of clothes, the shift in style has become more apparent, with characters getting even more deformed, having bigger heads and shorter limbs.[29]

Face and shoe design for Volume 1.

This is a modified image that included a Stiyl Magnus's face design for Volume 1.

Character design with height by Haimura Kiyotaka for Volume 2. 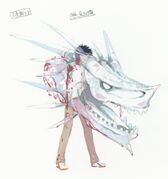 First design of the Dragon Strike by Haimura Kiyotaka for Volume 2. 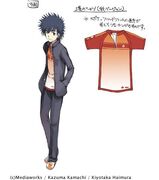 Design of Touma with winter uniform for Volume 12. 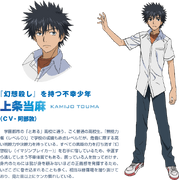 Toaru Kagaku no Railgun anime design as seen in the DVD/BD Booklets.

Toaru Majutsu to Kagaku no Ensemble profile with Index. 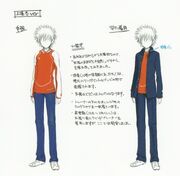 Haimura's design for a third-year Touma's outfit in his graduation for the parody short story in Dengeki BUNKOYOMI. 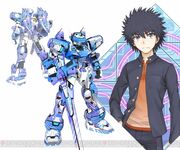 Kamijou Touma, as he appears in Toaru Majutsu no Virtual-On, with Temjin 707 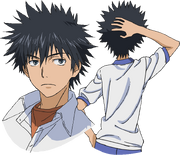 Retrieved from "https://toarumajutsunoindex.fandom.com/wiki/Kamijou_Touma?oldid=210140"
Community content is available under CC-BY-SA unless otherwise noted.