She is black-haired woman who is younger than Yumi. Her hair is parted in the middle and tied at the back. Two fringes of hair cover the sides of her head, exposing her forehead. She wears red rectangular glasses, and her eyes seem to beget a jovial characteristic from her.

Unlike Yumi, she treats the clones not with indifference, but with a sort of amusement, like a girl drawn to a cute doll anthropomorphizing them. Indeed, despite the humane actions she does for the clones, she still thinks of them as a necessary part of the experiment, and with a smile, is unperturbed at looking at the various corpses of the Sisters.

In a flashback to May of the current year of the Story Timeline, Yumi supervises the birth of Misaka 9982 and explains on how the clones had grown so fast, how they learned through Testament, and why they didn't need complex emotions to Eiga.[1]

Upon 9982's "birth", she towels to dry her and is later embarrassed for her after she shows no shame in exposing her naked body to her. She cuts her hair and gives her the clip that all Sisters wear, including the Original, Misaka Mikoto. She is later surprised by Misaka 9982's confidence on her knowledge brought into her by Testament. Before Misaka 9982's training starts, Yumi orders Misaka 9982 to clean up a room where a recent experiment with the Sisters have been conducted, where all of them were killed. Here, Eiga smiles, unperturbed by the carnage before her and the actions that she and her superior are about to have Misaka 9982.[1]

She later reappears with Yumi again during Misaka 10031's checkup. When she questions them regarding on what they will do if they had a clone appear in front of her. She exaggerates her fears regarding it, saying that it would be creepy to have someone with the same face and voice as hers as well as it would be mildly confusing for others; this, however, sours Misaka 10031's mood after her encounter with Misaka Mikoto earlier in the day, when she points out that she should go away.

It is unknown what had happened to her or to Yumi after the experiment's termination, though it can be assumed that they escaped any sort of justice or punishment. 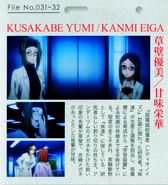