Toaru Majutsu no Index Wiki
Register
Don't have an account?
Sign In
Advertisement
in: Articles to be expanded, Characters, Kamisato Faction,
and 2 more

Imaginary Fest
Karasuma Fran (, Karasuma Furan?), shortly known as Fran (, Furan?), is a former member of the Kamisato Faction and a spy for the Anglican Church, a Magician pretending to be a Gemstone.[1][2]

The name used by Fran while being controlled by Coronzon, A. O. Francisca (A・O・フランキスカ, A.O. Furankisuka?), is derived from Al2O3 (aluminium oxide, crystalline form corundrum) and the Francisca, a throwing axe used by the Franks.[3][4]

Fran is described as a small girl in pajamas with surgical scars on her neck, apparently together with an implant.[5][6][7][8] She has purple eyes and has black hair in a bob-cut with a frontal fringe.[9][8][10] She wears a pink pajama hoodie with baggy sleeves,[11] purple lining, carrot-shaped toggles and a Bunny Grey logo on the back, as well as a headband with antennae positioned to resemble rabbit ears and a round rabbit tail antenna on her bottom.[11][12][9][10] During the heat wave, she wears a white bikini with a Bunny Grey design on the left breast and purple sandals.[8][10] Until certain events on December 12th, underneath her hood, Fran had three pigeon blood rubies embedded in her head.[4]

Fran carries a round, dark grey backpack which is full of radios and other electronic equipment, with various antennae sticking out of it.[7][8] A name tag is attached to it with her given name written in hiragana.[8] She is frequently seen holding a giant UFO balloon which she uses to float around.[5][6][7] The balloon has 'ABDUCTION' written in light purple letters along the rim, and a Bunny Grey logo on the top side.[11][10]

Not much is known about Fran's personality, but it can be assumed that she possesses at least some of the traits common to the members of the Kamisato Faction.

According to Kamisato Kakeru, Fran was supposedly made into a Gemstone via an implant from a UFO, though he isn't sure how much of that is true, and the rest of the Kamisato Faction are split over whether she really was abducted or not.[1][6] This is later revealed to be false, with Fran actually being a Magician and spy of the Anglican Church.[2][14] During the time she was working for the Archbishop, Coronzon secretly made Fran into a secondary avatar, embedding three pigeon blood rubies in her head.[4]

At some point, Fran came into contact with Kakeru and ended up joining the Kamisato Faction, in order to manipulate them for Laura Stuart.[14]

On December 4th, Fran alerted the other members of the Kamisato Faction to the arrival of Salome in Academy City.[6] The next day, she was present when Kakeru betrayed Touma and set the Kamisato Faction on him, intending to kill him to make Salome stop.[7] They were thwarted when Salome herself interrupted them, bringing a provoked Accelerator with her.[15] Later that night, when Kihara Yuiitsu stole the World Rejecter, Fran and the other Kamisato Faction girls offered their weapons to Salome to increase her power to fight Yuiitsu.[16]

After meeting with Touma, Index and Othinus at the Kamijou Residence, Fran attempted to escape the city together with the Tsuchimikados.[17][18][19] However, after Tsuchimikado Maika was struck with Aleister's curse magic sword which called in Karma-bearing chain beasts, she and the rest of the group headed for the Windowless Building in order to find a way to remove it.[20][21][22] After being separated from the others for a while when they were scattered by an attack from Aleister,[23] Fran rejoined the group as they ascended the structure and assisted in fending off the chain beasts while Touma faced Aleister himself.[24][25][26][27][28][29]

Following the events at the Windowless Building, Coronzon took control over Fran and used her in an attempt to seize Academy City's Bank. After stealing the Processor Suit and placing another one on Hamazura Shiage as a decoy, she was forced to return and target him due to an unexpected SIM conflict between the two suits which was preventing her from fully accessing the contents of the Bank within it.[30][31] During these events, she used the name A. O. Francisca, wore the Processor Suit and was aided by the army of Mimetic Predators.[4] On December 12th, during a battle at Heaven Canceller's Hospital, Aleister Crowley excised Coronzon from Fran using Spiritual Tripping.[32][33]

Following the temporary sealing of Coronzon and the evacuation of Academy City, Fran accompanied Touma and Aleister's group as they travelled to the United Kingdom in order to deal with the roots Coronzon had placed there.[34]

Fran was present at Windsor Castle during the party celebrating Coronzon's defeat and was subsequently involved in the conflict which arose due to the emergence of the other Touma.[35]

Fran claimed to be a Gemstone,[1] however she is actually a Magician.[2] She has an extensive knowledge pertaining to astronomy and radio waves, and is part of the front line of the Kamisato Faction’s information warfare team, together with Ellen.[6] She apparently knows more about astronomical bodies and electromagnetic waves than anyone else in the Kamisato Faction.[2] Spending a lot of time staring at the stars and chasing UFOs, she is quite capable when it comes to detecting radio waves and light flashes, and intercepting signals.[36]

As Toyama Luca speculated, Fran is the type of magician who observes and researches the stars and mysterious lights in the night sky, the latter of which have been viewed for millennia as unlucky stars and ill omens, and only within the past few decades been superseded by the idea of UFOs and vehicles flown by aliens. These magicians read the future from the stars, seal their light into talismans and amulets, and draw their power out when they see fit - part of the Golden-style of magic which had its heyday at the start of the 20th century and is standard in the present day.[37]

One of the Golden-style spells Fran has involves the invocation of one of the zodiac signs (in this case, Virgo (乙女座, Otomeza?)) and an angel associated with it (in this case, Hamaliel, angel of Virgo and August according to the Golden Dawn). The spell is activated with the following chant; “Virgo. Heh, Heh, Vau, Yod. Guide the light of the 6th Sign that has already been lost due to precession, oh angel with an 8-letter divine name. Drive out the approaching calamity!!”. A yellow-green light then grows from her fingertips. The spell's effects weren't shown as the Karma-bearing chain beast she was using it against interfered with the color scheme to disrupt the spell, which resulted in the light turning to a bright red as Aries (おひつじ座, Ohitsuji-za?) was activated instead, before exploding.[21] Fran has other spells which don't involve coloration.[28]

Fran has knowledge of ancient runes and magic circles, and made use of several such symbols, comprised of several concentric circles with horizontal and vertical lines along the edges of the circles, somewhat resembling crop circles, to leave a coded message for Index and Othinus.[38][37] She is also capable of using a special focusing method to enter a unique mental state, similar to those used by stage actors to get into character, to support the casting of magic and did so together with Luca in order to help cast the latter's spell to access the 'new world'.[39]

Fran is apparently unathletic and cannot climb onto something higher than her waist.[40]

Fran carries a variety of electronic equipment in her overstuffed backpack,[40] including various antennae and rods which stick out from the backpack like a sea urchin, radios and communication devices, and a digital clock.[41][42] As well as sending and intercepting signals and communications, the equipment can also be used for jamming purposes.[43] Fran can control and monitor her equipment via a card-sized terminal connected to the backpack by a spiraling cord like that of a home phone.[44][45][42]

Aside from her electronic equipment, Fran also has a Swiss-made multi-tool device, with the handle of a pair of pliers, containing screwdriver, gimlet and other tools, as well a silver blade as long as an index finger.[11]

Fran frequently makes use of a handmade, low-altitude balloon,[11][40] shaped like a UFO and themed after Bunny Grey. She can apparently adjust the balloon's buoyancy by letting lighter-than-air gas in and out, and freely move it in any direction via remote control using the card-sized terminal in her backpack.[11][46] The lower surface of the balloon can light up (possibly having a theater spotlight inside for false abductions) and glow like a paper lantern on a construction site at night or a fluorescent light hanging from the ceiling of Japanese-style lights.[11][12] The balloon is capable of carrying Fran (and at least one other of Kamijou Touma's size) via a wire hanging from the base.[11] She also carries a spare one, folded up with the gas removed.[24]

The Bunny Grey Messenger (ウサギグレイメッセンジャー, Usagi Gurei Messenjā?) is Fran's high power microwave galactic communication space station. About 360 meters long, it was intended to speak to a certain unseen individual for 100 years and a piece of fanart dedicated to Bunny Grey.[47] The station doesn't use nuclear power, but it does create similar levels of energy.[12] The station's output is enough to flood Academy City in microwaves and create an abnormal heat wave, with temperatures exceeding 55 degrees in December.[48][49][8] The microwaves can also be focused to incinerate targets on the surface,[50] but the station was not designed to carry out such attacks so it is tricky to pull off and slight adjustments can't easily be made.[12] Fran is capable of remotely operating the station using the high-powered communication equipment she carries in her backpack.[50][51][47]

Unknown to Fran, Coronzon made her into one of its secondary avatars while she was in contact with its primary avatar Lola, working for the Archbishop.[4] The demon's control was rooted in three pigeon blood (ピジョン・ブラッド, Pijon Buraddo?) rubies implanted into Fran's head, forming a 'face' and symbolizing the magic circle made through the blood of three pigeons/doves used to summon Coronzon.[4] Coronzon's level of control over Fran was weaker than for Lola, and Fran subconsciously left a hint through the use of name A. O. Francisca (A・O・フランキスカ, A.O. Furankisuka?)(the A. O. being derived from the Al2O3 (aluminium oxide, crystalline form corundrum) composing the pigeon blood rubies).[4]

While being possessed by Coronzon, Fran's strength was greatly enhanced through a power similar-but-distinct-to Telesma being poured into the pathways for her life force. This method is not suited for long-term use and would have risked burning out her life force pathways, which might have prevented her from continuing to live.[52] When exposed, she moved and fought in a bestial manner.[4][52]

In this state, she also created and commanded hundreds of Mimetic Predators. Derived from a side-effect of the Loch Ness experiment carried out by Aleister Crowley, in this case a deliberate failure was used to mass produce powerful monsters with immediate strength.[4] She took inspiration from the Kamisato Faction in creating a method of managing a large battle force, with the Mimetic Predator taking the form of young girls to disguise themselves in the city.[4] As well as utilizing them separately, she also made use of them as attachments to the stolen Processor Suit in the form of tentacle spears.[30] 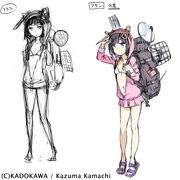 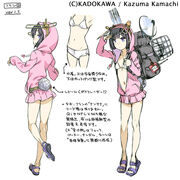