Toaru Majutsu no Index Wiki
Register
Don't have an account?
Sign In
Advertisement
in: Characters, Science Side Characters, Espers,
and 3 more

Keshouin Asuka (, Keshō-in Asuka?), also known by nickname Jumpy Bunny (ビクビクウサギ, Bikubiku Usagi?), is the high school student council president at the school which Kamijou Touma and his classmates go to after the destruction of his school.[1]

Keshouin Asuka has black hair with a frontal fringe. She wears a largely grey uniform with a white shirt, a red tie with yellow stripes, a V-neck jumper, skirt, long socks and black shoes. She also wears a red bunny ear headband.[2]

She is shown to be shy, with a tendency to cry and turn to Akikawa Mie for support.

At some point in the past, Asuka met Akikawa Mie through her school's tutoring system. Around summer in the current year, the two had promised to go to a lunar development forum together but Asuka came down with a fever and Mie looked after her instead.[3]

Her appearance is used by Kihara Yuiitsu using the FIVE_Over Outsider's optical camouflage technology, in order for her to get close to and observe Kamisato Kakeru, who transferred to her school, and take revenge for Kihara Noukan. Yuiitsu could have easily killed her, but in emulating Noukan, decided to have her get a doctor's appointment instead, preventing her from going to school.[4]

Along with Glasses Boy, she distributed water bottles to everyone in her school.[5]

At dawn on December 11th, Asuka and Mie breathed a sigh of relief as Useful Spider announced the end of the 48 Hours to Restore Order and students began to return home.[6] 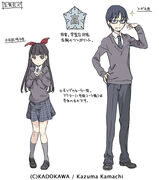 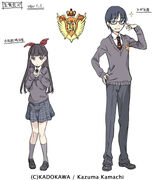