Toaru Majutsu no Index Wiki
Register
Don't have an account?
Sign In
Advertisement
in: Articles to be expanded, Characters, Science Side Characters,
and 4 more
English

Index PSP Game
Kihara Amata (木原数多, Kihara Amata?) is an antagonist in the original Toaru Majutsu no Index series. A member of the Kihara Family, he displays a vicious nature befitting of the commander of Hound Dog. He is also a researcher, and most notably is the former mentor of the strongest esper in Academy City, Accelerator.[1]

Amata is only seen wearing a pair of pants and a jacket over his black shirt which is somewhat similar to Accelerator's black and white shirt. The most of notable of all his clothes is his long white lab coat, which makes him stand out amongst his own forces that wear all black.[1]

He wears his blonde hair short, which compliments his strong facial features, such as his square jaw and cheek bones. Most prominently, Amata has a tattoo on the left side of his face.[1]

Other notable apparel he wears is a pair of machine gloves known as Micromanipulators, used for high precision work.[1]

Kihara Amata thinks little of human lives, especially those of his subordinates, calling them garbage with no human rights, even more so with espers whom he sees as nothing more than guinea pigs.[1] This thinking allows him to kill anyone that he deems useless without remorse, and derives pleasure from taking someone's life; this thought process is comparable to him simply pulling out weeds.[2]

However, because of his very nature, Vento of the Front's Divine Punishment does not affect him, as even with the intent to kill Vento, he shows none of the hostility required for the spell to work. She even describes Kihara Amata as being truly rotten to the core, and is at least similar to her.[2]

Kihara Amata also has a penchant for peppering his dialogue with profanity even in non-hostile situations.

However despite his cold blooded disposition and willingness to immediately resort to killing anyone that remotely annoys him, Amata has shown a level of mercy and self control when dealing with children or his "guinea pigs", as seen during his confrontation with Accelerator, where he stated that the sole reason why he didn't kill him during the latter's childhood having his ability developed under him was due to him being a child and his "precious" research specimen, allowing Amata to tolerate him to a certain degree despite his personality and hold off from killing him numerous times in the past.

Not much is known regarding Amata, though he is regarded in Academy City as the greatest ability development researcher for development of Accelerator.[1] Even during that time, Amata wanted to kill Accelerator, though could not because he was research material. Even so, Amata was able to train Accelerator to his specifications, discovering weaknesses to his own abilities that he could readily exploit if he desired, most notably the ability to bypass Accelerator's Redirection. Even though he is a developer of esper abilities, he believes that espers are simply experimental animals.[1]

Some time later, Amata became the leader of the Hound Dogs under the command of Aleister Crowley.

Kihara Amata first appears before Accelerator in attempt to kill him and subdue Last Order under the direct orders of Aleister Crowley, after Vento of the Front's invasion of Academy City and crippling its infrastructure.

Here, Accelerator underestimates Amata's capabilities and is thoroughly beaten to a bloody pulp. Accelerator however, was able to catapult Last Order out of grasps of the Hound Dogs and is later saved by the arrival of Index, who distracted them. While trying to attack the vehicle that Accelerator commandeered from the Hound Dogs, Amata meets Vento of the Front who is also looking for Index as so she could kill her. Much to her mild amusement, Amata is totally immune to Divine Punishment even after attacking her. Annoyed, Amata orders the Hound Dogs to form teams to eliminate Accelerator and any witnesses, Vento of the Front, and a team to come with him at the rendezvous point. Before leaving Amata tells Vento of the Front to be more capable if she wants to face him.

Kihara Amata is later seen at the rendezvous point, intrigued at the Hound Dogs becoming unconscious due to Divine Punishment and later orders the set up the Testament machine for use on Last Order. Much later, the Hound Dogs retrieve Last Order, to which Amata uses to taunt Accelerator over the phone, however, Accelerator sees through Amata's ruse of threatening Last Order with harm, since the higher ups of Academy City(Crowley) have ordered him not to harm her, greatly angering Kihara Amata.

Later, Amata uses the Testament machine to write a virus on the captured Last Order to activate Fuse KAZAKIRI. Here, he is greatly amused by Aleister's creation of something that likens to an angel. His excitement however, is interrupted by the arrival of Accelerator. Here, Amata uses his own Hound Dogs as a shield to counter Accelerator's gunshots, and later does battle with Accelerator after he mows down all remaining members of the Hound Dog with him. Predictably, Amata easily deals with Accelerator who later runs out of power for his collar. However, Kihara Amata is later taken by surprise by Accelerator trying to stand up and fight him even though his powers have run out, with this Amata is injured by his constant attacks, in anger however, Amata takes the chip that can treat the virus infecting Last Order and destroys it, taunting Accelerator at the same time. He then proceeds to beat down on Accelerator, however, the latter is saved by the arrival of Index, who has come to discover that Last Order is the core to keeping Kazakiri's Angel form.

Amata tries to attack her while she is curing Last Order, but stopped by the constant attack of Accelerator. Amata angered by Accelerator, finally uses a grenade on a weakened Accelerator. Much to his surprise, Accelerator survives the explosion of the grenade and sees before him the black wings that sprout forth from his back. Here, he surmises that the wings are made out of AIM, and describes his form as an angel. Amata met his demise after being used by Accelerator as the projectile for his own version of the Railgun.

Despite dying at the end of the first arc he was introduced, Kihara Amata still somewhat influences the future events, most prominently his counter that was used by other antagonists, albeit with a variable success rate. In New Testament, one of his relatives reveals that she can still use his thought patterns and mainly uses them in most cases.

Kihara Amata appears as a non-playable character in the game, here he is first seen in Accelerator's story route where he kidnaps Last Order to activate angel mode of Kazakiri Hyouka, after defeating her, Accelerator regains Last Order, the final scene unlocks a CG of Accelerator about to do battle with Kihara Amata.

Amata also appears in Mugino Shizuri's story route, he gives her a traitorous Sister clone as a partner and gives her missions for her and the clone to complete.

During the events of SCHOOL's conflict with the DA, Amata made a cameo appearance in the flashback of Yuzuriha Ringo during her time being experimented on when she was part of the Dark May Project. Where after Ringo had gone berserk upon seeing her friend, Ryuugou Tomoka death and Ringo being forcibly restrained by the the researchers, Amata was seen entering into the testing area of the lab,while grunting unhappily upon seeing the results of the experiments together with his relative, Kihara Souji and was later seen irritatingly asking the researchers if they really called upon him just to see how meager the experiment was.

As the commander of the Hound Dogs, Kihara Amata is capable of operating a anti-tank missile launcher on his own,[2] as well as anti-personnel grenade.[3] It is said by Kihara Enshuu, while mimicking Amata's thought patterns, that his combat pattern pattern consists in controlling hammer-level destructive power on the microscopic level.[4] Amata's thought patterns are also the ones primarily used by Enshuu to beat down a high level esper in a close quarters brawl, showing his efficiency against espers.[5]

Kihara Amata is also a talented researcher and power developer,[1] capable of operating a Testament machine[6]. He was the one who "gave" Accelerator his powers, and knew his weaknesses as a result, such as throwing off Accelerator's wind control calculations by using a soundwave that changed the factors in Accelerator's calculations. Amata himself explains that he perfectly understands that "controlling" something with vectors requires very difficult calculations, so by adding an unknown element to "wind" such as "sound", a "blind spot" in the calculations is created and properly manipulating wind for air attacks becomes too hard. In order to produce a soundwave with the proper wave and directionality Amata uses a device he carries as a strap on his cellphone.[1]

Appearing only once in the series, Kihara Amata was designed as something unexpected in the world of Toaru Majutsu no Index, and references Don Quixote regarding his design.[8] 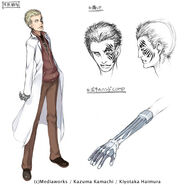 Design with his mechanical glove by Kiyotaka Haimura for Volume 12 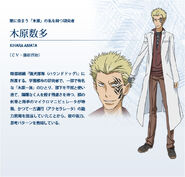