London, England
The Knights of England (騎士団, Kishidan?, lit. "Knights"), commonly referred to as the Knights, are one of the three main powers of the United Kingdom alongside the Royalty and the Anglican Church, led by the Knight Leader.[1]

Their mission is to maintain the status quo between the three main powers. In the past, the Knights used named like "7th_Macer" and "5th_Axer", but those names were abandoned seven years before the start of the series, not because the current Knights had lost their original expertise, but because they had mastered every technique, thus allowing them to enter a new realm of power. The Knights had desired that power because of the internal worries in England, which were also the reason they had been formed originally.

Since the Knights don't want to be restricted by a tool, they'll only listen to the orders from the leader or the queen, and will be apathetic towards the orders coming from the archbishop, sometimes even disobeying them.[1]

The techniques of the Knights are said to be inherited from the crusaders of the tenth century which attacked the Middle East. These techniques have defeated a large amount of believers of other religions since ancient times. Their power is considered even great enough to cause an island to disappear from the map.[1]

The knights make use of an official model of armor, which passes the wearer's magic power from the wearer into the armor in order to greatly increase their mobility.[2] The Knights of England have to put reinforcing spiritual items on their armor because their physical strength is great enough it would likely destroy it. Additionally, their armours have the words "United Kingdom" engraved on their gauntlets.[1][3] A set using the opposite concept to enhance the wearer's magic power was devised, however it was considered too dangerous for use, even by the combat-obsessed knights, and subsequently not adopted as standard equipment, the prototype being left in the Sword Sanctuary.[2]

Prior to reorganizing themselves after having mastered all knight techniques, the Knights were split into the following known teams:

Twenty years ago, the knights destroyed an institution created by a secret cell within the Anglican Church, which was in contact with Academy City and sought to create a Magician-Esper Hybrid, under the pretext of preventing the leakage of magic teachings and secrets, as the higher-ups didn't want magic to have any contact with science. During the operation, they bludgeoned the esper Ellis to death with maces as he bought the young Sherry Cromwell time to escape. This event would traumatize Sherry and influence her future actions, as well as giving her a hatred of the knights.[4][5]

Ten years ago, one of the 13 Knight Squads, the 1st Lancer Squadron, was tasked with gathering information in a mountain village located in Kyoto. They were trying to decipher why the mana flow had become abnormally large and eliminate any threats. Though the last call from a survivor was along the lines of "that’s not human", the higher ups didn't believe it and only provided the knights with the most basic equipment. When they reached the village, they found the area covered in a layer of ash, with Himegami Aisa in the middle of it all. It is not revealed what became of them afterwards.[6]

When Necessarius decided to assist the Roman Catholic Church in retrieving Orsola Aquinas and The Book of the Law back from the Amakusa Christians the Archbishop Laura requested the knights assistance in dealing with the Amakusa. Due to their history, the knights did not wish to take orders from the church and thought of how simple it would be for them to wipe out the Amakusa. Twenty-one knights, using a sea current manipulation magic spell handed down by St. Blaise, swam from England to Japan. As soon as the Knights arrived to Japan and began walking up on one of its beaches, they were quickly attacked and defeated by Kanzaki Kaori, former leader of the Amakusa Christians.[1]

The knights supported the secret plans of Second Princess Carissa and after she obtained the Curtana Original at midnight on October 18th, proceeded to seize key locations and persons across the country in a coup d'état, later known as the British Halloween. Empowered by the Curtana, they were involved in various battles across the country up until the end of the coup.[7][8][9][10]

The knights were involved in several battles during World War III, including the Battle of the Dover Strait against invading French forces.[11][12][13]

The knights carried out the attack on the North Sea Sargasso as part of the operation against GREMLIN.[14]

During the Crowley's Hazard invasion of the United Kingdom, knights were present both on the frontlines at the Strait of Dover and at the capital in order to defend against the invaders, but were unable to halt the enemy's advance. Around this time, certain members of the knights attempted to take advantage of the disappearance of Necessarius's Archbishop and the chaos caused by the invasion in order to further their own agendas.[15] 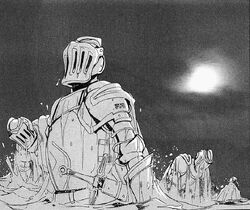 A group of Knights arriving on Japanese shore, as seen in the manga