It was released on November 2007, as part of the "beginning and period" theme of the Dengeki h&p edition of the Dengeki Bunko Official Bootleg Book. Authors from Dengeki Bunko are to write down a story around the "first story and final chapter" of their work. It is a play on words on the "h&p" abbreviation, as "h" means hajmari (はじまり, hajmari?) which means beginning, and "p" which means period.[1]

On July 19, Touma and Mikoto face off on the metal bridge in School District 7 just like Volume 1. But when Kanzaki Kaori interrupts, it is hinted this might be the world of the final volume on July 19 of one year after Volume 1. Afterwards, Mikoto and Kanzaki grow angry over how often they appear and begin to fight. Meanwhile, Kamijou reasons through everything to deduce whether this is first or final volume. 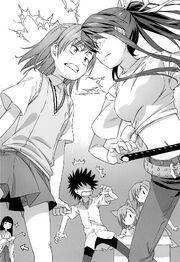 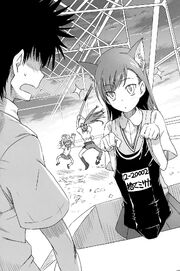 Retrieved from "https://toarumajutsunoindex.fandom.com/wiki/Konna_Saishuu_Banashi_wa_Iyada!!?oldid=590479"
Community content is available under CC-BY-SA unless otherwise noted.