Toaru Majutsu no Index Wiki
Register
Don't have an account?
Sign In
Advertisement
in: Characters, Science Side Characters, Academy City Students,
and 3 more

Kuriba Ryouko has vertically striped hair, alternating between light and dark from a dark stripe at the middle of her frontal fringe.[4][1] She has yellow eyes, and a darker section across the right side of her face from when she was split apart. She primarily wears an outfit consisting of a lab coat over a school uniform, both primarily black and white.[5][4]

While working alone in her room, she wears swirly glasses.[6]

Kuriba displays a reluctance to get other people involved in her affairs.[7] She is devoted to finding a way to save her mother, volunteering to being split in two as part of the cyborg experiment to gather data to accomplish her goal.[8] She also does not seem to put much value on her life, saying as such with her goal having been fulfilled when facing the doppelganger and being willing to give up her own soul or life to satisfy it.[8][9][10]

Kuriba has a tendency to accept sacrifice as a necessary condition to achieve something, such as spreading the Indian Poker to solve the doppelganger problem despite knowing it would cause chaos,[7][11] and not making an exception with regards to her own life in negotiations with her doppelganger.[10][11] The doppelganger, who inherited this trait, noted that she was a person who couldn't accomplish anything without doing so.[11]

When she was little, Kuriba was caught in a building collapse and only survived due to a lung transplant from her mother. Her mother had a weak body even before the incident and was far from healthy afterwards.[8][12]

Prior to coming to Academy City, Kuriba was a researcher in the field of animal development, mainly the effects of changing body structure on intelligence, and made notable achievements in the study of owl parrots and gentoo penguins while in elementary school. As a by-product of her research into the explosive development of intelligence in apes and how finger operation methods stimulate the brain, she invented a style of finger exercises to provide strong cerebral stimulation, which proved effective in improvising emotional and behavioral disorders and cerebral palsy. Various hospitals and nursing homes across Japan came to adopt them and she was officially invited into Academy City for her achievement.[1][3][13]

Kuriba subsequently dedicated herself to researching cyborg technology in order to learn the techniques need for her mother to make a recovery.[1][3][13][8][12] She developed various pieces of cyborg technology, including safety limiters to prevent cyborgs from harming themselves, artificial muscles utilizing chemical reactions, and suppressants to prevent flesh rejection towards cybernetics.[7][12] One of the projects she was entrusted with launching and overseeing involved utilizing the stimulation caused by cybernetic replacements for the development of abilities which could not be produced by a regular human body.[1][3][13] At some point, she also visited the Clone Dolly Workshop,[1][3] where the card-based Testament which would later become the basis for Indian Poker was used in the Ideal experiment.[16] [17] [10][18]

However, as she was beginning to produce the results she sought, her mother collapsed, having caught an infection from pulmonary edema, with her body at its limit. The advance of the infection was delayed by drugs but doctors only gave her a year or two at most to live. Kuriba needed to develop cybernetic replacements for all of her mother's afflicted organs and body parts, but was faced with an overwhelming lack of data for development, given the limited number of cyborg treatment cases, and the difficulty of gathering data on all of the many body parts needed for the treatment.[8][12]

In order to gather this data in the time she had left, Kuriba took a leave of absence from Shinshikimi Middle School and volunteered herself for an extreme cyborg experiment planned by the institution she was working with, which she had previously discussed with the facility's chief.[8][12]

In the Total Human Cyborg Replacement Project, her body was split in two and the missing parts replaced with machinery to create two separate cyborgs.[1][3] Acting as both observer and specimen, Kuriba planned to use the experiment to gather data on every part of the body.[8][12]

After a year living apart, the two Kuribas were recombined into one, with no split personalities or rejection, and retaining the memories of the time split apart.[1][3] While Kuriba had wished to test the compatibility between the cyborg technology and the human body, the institution had also hoped to observe a possible side-effect - the creation of a "soul", and assembled the removed cybernetic components into a mechanical doppelganger, which believed herself to be Kuriba Ryouko and the researchers considered to have a soul (though the doppelganger would later conclude otherwise).[1][3][19][18]

Kuriba learned of her doppelganger after the surgery and warned the scientists of the potential risks, theorizing what might happen if the container was broken and the abnormal free soul released, but she was ignored.[6][3]

While busy working on the designs of her mother's cybernetics,[6][3][8][12][20] Kuriba tried to find a solution to the problem posed by the doppelganger and its alleged soul, with her soul diffusion theory in mind.[7][8][12] She was not able to find a solution on her own,[7][12] so she created the Indian Poker cards which enabled people to record and view dreams, and distributed the methods to produce them.[1][3] As Indian Poker spread, she released a card with her own knowledge out amongst the cards in distribution across the city,[4][21][7][12] hoping that it would eventually lead to someone capable of making a breakthrough.[7][8][12]

Kuriba first appears in a Indian Poker card that Misaka Mikoto was using as she was searching for the Bust Upper card. Seemingly speaking to Mikoto directly, she speaks cryptically of the future and that there is a threat that not only Mikoto cannot ignore, but also a threat that could lead to another one if Mikoto eliminates it. Before Mikoto could confront her, she appears to split into two.[4][21]

Mikoto later meets two "Kuribas" for the first time after the Electromaster was asked by Shokuhou Misaki to investigate on Kuriba's background. The first Kuriba, which was entirely mechanical, escaped from her facility by jumping from the topmost floor (and surviving). Meanwhile, the original Kuriba is later tracked down by Mikoto in an apartment complex with the help of Misaki. Although hesitant to cooperate at first, the original Kuriba eventually agrees to explain her involvement with the "soul creation" experiment and the development of the Indian Poker cards.[6][3]

Once she completed her explanation, she left the two and went to collect her prescribed Miahilin. She considered getting Mikoto's help but decided against it, thinking that the situation would be resolved in time and she shouldn't involve others unnecessarily. She was then confronted by the doppelganger who had tracked her through her prescription, but managed to escape from her doppelganger's grasp using a countermeasure she had prepared beforehand.[7][12] After escaping from the doppelganger, Kuriba was caught by Seike but was saved by Mikoto who confronted the Scavenger operative as she escaped.[7][8][12]

At her apartment, Kuriba transferred her research data, so that her mother would be saved regardless of her fate, before setting out in order to resolve the situation.[20] Reaching the area where the doppelganger and Mikoto were fighting, Kuriba told the doppelganger she wished to speak with her and was brought about the data storage airship. She described the Indian Poker and her efforts to find a way to erase a soul, offering to erase her own soul so the doppelganger could have her human body. When the doppelganger told her she didn't want Kuriba's body but wanted her gone and told her to kill herself if she wished to help her, Kuriba replied that with her goal of ensuring her mother's survival fulfilled, it didn't matter what happened to her, and let go of the airship. She was caught by Scavenger who had returned to aid Mikoto.[10][18] Afterwards, Scavenger decided to discretely drop her off with their client.[19][22][18]

Parts from the doppelganger were successfully used to save Kuriba's life. Afterwards, she began to see the doppelganger in her dreams. Initially she thought it was a hallucination brought on by her guilt, but the doppelganger in her dream had an accurate record of her battle with Mikoto, something which Kuriba herself didn't know. When Kuriba asked if this was a chance for her to apologize, the doppelganger told her that she wasn't trying to kill her over a grudge but as a necessary condition, noting that accepting that sacrifice as such may have been an influence created from Kuriba's thought patterns, describing how Kuriba spread Indian Poker despite knowing it would cause chaos in order to save her mother and didn't make an exception with regards to her own life. While noting that Kuriba was a person who couldn't accomplish anything without sacrifice,

the doppelganger told her that there was no need to reject who she was, as she would become someone who would harm nothing but also create nothing, which would make sharing her life boring. Since then, the doppelganger kept appearing in her original's dreams and pointing out points for correction in her research. Kuriba described the situation to Mikoto when she came to visit her in hospital, apologizing to her for forcing the responsibility onto her and telling Mikoto how the doppelganger seem to be the most fulfilled in her battle with her.[11][15]

Before entering Academy City, Kuriba was already a genius at a young age, studying the evolution of intelligence in apes and using knowledge gained by this for medical purposes.[2] After being invited by Academy City, Kuriba became a talented intellect in the field of cyborg research, knowledgeable and intelligent enough to have devised a number of the technologies which were used for her cyborg body, as well as countermeasures against them.[7][12][19][18] She was also capable of devising multiple methods for Indian Poker from readily obtainable tools.[1][3] 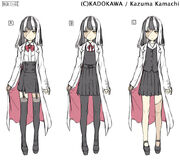 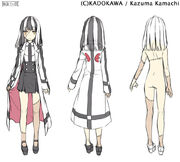 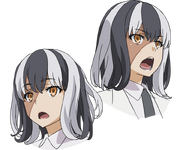