It consists of a set of dozen sheets of parchment with eerie spells and magic circles written on them in old ink,[1] with the words written in Latin cursive, but amended with small notes in Russian cyrillic at intervals.[2] The contents include what to replace and with what in order to activate a Roman Catholic spell under Russian Orthodox standards.[2]

The parchments contain information concerning archangels other than Michael, those associated with the other members of God's Right Seat, and their respective symbols. This information was necessary for Fiamma to make up for the gaps in the knowledge held within Index's grimoires, which were lacking deeper esoteric knowledge regarding the angels and God's Right Seat.[3][4][5] It includes the Russian Orthodox Church's top secret inferences into the spells of the archangels,[5] and unconfirmed information gathered from across Russia by the church,[5] apparently incomplete.[6]

The parchments are first contained in a duralumin briefcase handcuffed to a Russian soldier present on the same Russian military convoy train Accelerator and Last Order are hiding in, but Powered Suits from Academy City's forces attack the train looking for the briefcase.[1] They manage to cut the handcuff chain, but Accelerator, thinking Academy City is after him, attacks and defeats them. The parchments are later found by Accelerator, who decides to keep them, thinking they are related to the "different set of laws" Aiwass told him about[1] and that his best bet would be to get information out of the people that these papers were supposed to be delivered to.[7] Accelerator also feels an odd sense of pressure from them[7], the same way he feels around "Unabara Mitsuki".[8]

Upon arrival at his destination, a destroyed Russian airbase, Accelerator deduces that this was the work of an underground organization from the Dark Side of Academy City and concludes that he should look into the organization that infiltrated Russia to get his answers, but before he can do that, he is attacked by Vodyanoy and twenty other magicians. Defeating them and realizing he fought an enemy using vectors and laws unknown to him, and thus might be connected to the parchments, he thinks of questioning them, but before he can, he is attacked by Misaka Worst.[9]

After fighting him a second time, Kamijou Touma leaves Accelerator with a note informing him to look for "Index Librorum Prohibitorum" to inquire about the lambskin.[10][11] Later, after reaching the Elizalina Alliance and examining the parchments, Accelerator can tell that it is some kind of manual trying to illustrate a story, but is struggling to figure it out, until a bodyguard of Elizalina tells him she could decipher it for him.[2] He later meets her, and she confirms that she can decipher it, but that it would take time. Accelerator however just needed to know that the parchments could be deciphered, and asks Elizalina to focus only on healing Takitsubo.[12]

The lambskin is revealed to be the last piece for Fiamma of the Right to fill the gap between Index's magical knowledge in order to reach his goal. He sends Archangel Gabriel retrieve it.[3] Although the parchments remained in Accelerator's pocket during their confrontation, Gabriel was able to retrieve the magical knowledge from them through its senses and relay it to Fiamma via their link.[5]

Accelerator would later make use of parchments together with values obtained from his encounter with Aiwass in order to acquire the parameters necessary for him to heal Last Order.[13][14]

After the battle on the Star of Bethlehem, when confronting Fiamma personally, Aleister Crowley reveals that although the parchments were incomplete, it would have been a problem if they were analyzed by an anti-magicial organization such as the Anglican Church, hence why he had sent out a unit to retrieve them.[6]

Since the parchments contained a song in the form of a magical aria, Haimura Kiyotaka designed the parchments to resemble a musical score and musical notes.[15] The version seen on the back cover is the revised version. 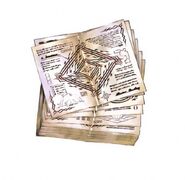 The parchments as they appear on Toaru Majutsu no Index Light Novel Volume 22's back cover. 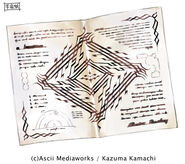 The parchment's design by Haimura Kiyotaka.
Add a photo to this gallery

Retrieved from "https://toarumajutsunoindex.fandom.com/wiki/Lambskin_Parchments?oldid=174254"
Community content is available under CC-BY-SA unless otherwise noted.