While using Anna Sprengel's body, Madame Horos appeared as a woman (between one to two thirds taller and with an older physical appearance than the actual Anna Sprengel) with long reddish-blonde hair, hung, rolled and squished into several fried shrimp shapes. She wore a gaudy red dress, looking like a leotard with a long skirt attached and partially exposed cleavage. She also wore lipstick, rose decorations in her hair and the Rosicrucian emblem on a thin chain.[4][5][6][3]

Referred to by various people who know of her as a despicable and detestable fraud,[1][3] Madame Horos was a deceptive and manipulative woman with an apparently exceptional greed.[1][3][4][5][6][7] She showed no qualms or remorse with her manipulations, as seen when she exploited Takitsubo Rikou's wish to help her boyfriend Hamazura Shiage, making her aware of the threat to his life and presenting a method which could prevent this, to make her take a tool which would actually manipulate her in order to target his life.[4][5][6][7]

While posing as Anna Sprengel in the events surrounding Ceremony of Mo Athair, Madame Horos presented herself as a powerful and knowledgeable Rosicrucian magician, emphasizing her assumed identity as the one whose name appeared in the Sprengel Letters as the ruler of the No. 1 temple in Germany and the one who gave permission for the Golden Dawn and the Isis-Urania Temple's founding.[3][4] As well as making claims of her power and presenting knowledge,[4][5][6][3] she claimed to be acting because she had some responsibility for authorizing the Golden Dawn and intended to deal with the last traces of the cabal to resolve the whole affair.[4][5][3] According to Aiwass, the matter was worthless to her personally, but she had to act and make an appearance as Anna Sprengel once problem became as big as it did in order to keep up appearances and preserve the reputation of her assumed identity.[3]

During this incident, Madame Horos was described as speaking at times in a singsong voice as if she was singing a nursery rhyme,[3][5] sounding cheerful and with a tone of enjoyment during her initial manipulations of Takitsubo Rikou.[4][5] She also rolled a number of words.[5] Her words in general were described as sweet but with wickedness within.[5]

At some point in the past, Madame Horos managed to steal the body of Anna Sprengel and assumed her identity, impersonating her for over a century onwards.[3]

During the time of the Golden Dawn, Madame Horos approached Samuel Liddell MacGregor Mathers under the guise of Anna Sprengel, who was said to have authorized the founding of the Isis-Urania Temple through written correspondence with William Wynn Westcott (though the Sprengel Letters were considered forgeries), and after deceiving him, made off with crucial cabal documents. This brought a disaster to the cabal and earned her Mathers' hatred, though his Belzébuth and Typhon-Set were ineffective in this case.[1][3]

Over the course of the century she was inhabiting Anna Sprengel's vessel, Madame Horos apparently squandered a considerable amount of Anna's power.[3]

During the events surrounding the Ceremony of Mo Athair, Madame Horos approached Takitsubo Rikou as Anna Sprengel, offering her a means to help Hamazura Shiage,[4][5][6] but actually planning to kill him while using her. Her attempt was ultimately thwarted by the revival of the recreated Dion Fortune.[7]

After Coronzon's defeat, Madame Horos appeared before the dying Aleister Crowley, still posing as Anna Sprengel, but was ambushed by Aiwass who swiftly dispatched her and restored the real Anna Sprengel to her body.[3]

Possessing the body of Anna Sprengel, Madame Horos had a degree of knowledge and power (how much was truly her own and how much was stolen was not fully clear).[4][5][3] While posing as Anna Sprengel, she made claims of her power, such as being able to deal with Magic Gods Nephthys and Niang-Niang,[6][3] but Aiwass remarked on her lack of capability (as well as the nerve to continue calling herself Anna Sprengel all that time despite this), and Anna herself later noted how she had lost a lot of power due to the fraud's waste.[3] While she displayed knowledge to aid her portrayal,[4][5][6] Anna later referred to her as a fool, noting that she could have obtained a lot more from her manipulations if she had used her head properly.[3] However, Madame Horos was skilled at deceiving and manipulating people.[4][5][6][3]

During the events surrounding the Ceremony of Mo Athair, Madame Horos was able to slip into the confessional of Edinburgh Castle during Takitsubo Rikou's interrogation and replace the individual on the other side.[4] She also had a combat module made out of a grimoire, in the form of a transparent, volley ball-sized crystal ball, which was used for modified scrying, a method which she presented to Takitsubo as a method for an esper to make use of magic without the harmful side-effects and through which she later manipulated her, and could fire beams of light against targets, with aiming assisted by Takitsubo's AIM Stalker.[5][7] During the time of the Golden Dawn, Mathers' Belzébuth and Typhon-Set were apparently ineffective in dealing with her.[1][3]

The Rosicrucian emblem which Madame Horos carried (a symbol also used by the Golden Dawn) is an all-purpose spiritual item which can mass-produce sigils, extracting the name of an angel or spirit by spelling it out in one stroke. Each of the rose's petals has one of the 22 Hebrew letters engraved on them.[3] 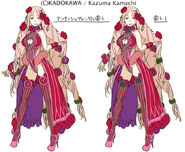 Retrieved from "https://toarumajutsunoindex.fandom.com/wiki/Madame_Horos?oldid=273474"
Community content is available under CC-BY-SA unless otherwise noted.