'Maidono Hoshimi' (, Maidono Hoshimi?) (real name unknown) is a character introduced in Souyaku Toaru Majutsu no Index.[1][2] She is a Level 4 esper, using Telekinesis optimized at cost to her, and an operative of the Dark Side of Academy City, working under Director Neoka Norito.[3]

Maidono's true appearance is said to be that of a surprisingly innocent-looking girl with a non-blonde bob cut.[5]

On December 24th, Maidono kidnapped Last Order on Neoka's orders in order to use her as a hostage against Accelerator to stop his plan to eliminate the city's dark side.[7] However the people with Last Order when Maidono made her move; Kamijou Touma, whom she had stabbed in the side during the abduction, Index, Misaka Mikoto and Misaka 10032,[7][3] moved to stop her from getting the captured Last Order to a retrieval team, with Touma defeating her despite his wound.[3] Afterwards, the unconscious Maidono was taken by Misaka 10032 to an Anti-Skill station along with evidence of Neoka's involvement.[3]

On Christmas Day, Maidono encountered Touma again in Heaven Canceller's Hospital as he was attempting to escape to stop Anna Sprengel, despite being heavily injured and dying from the side-effects of the St. Germain he had been force-fed by her. Maidono offered to help him escape, but Touma turned her offer down.[9]

Maidono's esper ability is Level 4 Telekinesis, which has been optimized using the signal slide method to produce Level 5-class destructive output.[1][4][10] Using her index fingers to aim her ability, Maidono can grab and move inanimate objects.[1][11][4][2][10][5] The maximum weight limit of Maidono's ability is 100 thousand tons.[10] While she can move targets with great force with just one index finger, she can also focus both fingers on a single target to alter the vector of her power, tearing the target apart by pulling her fingers apart, pushing them together to compress it or shifting the points of force slightly out of alignment to provide rotation.[2] Optimizing her ability with the signal slide method has rendered Maidono only able to fully focus her nerves on her two index fingers and only manipulate things with them, costing her the ability to use chopsticks.[10]

During the Christmas Eve kidnapping, Maidono carried a roll of an electronically-Controlled Rope (, Sōjūhojō?),[1][12] originally a serpentine duct tape to safely wrap around and seal off leaks in gas and steam pips at accident sites too dangerous for people to approach, which can spread out, bind, constrict and kill on its own.[1] She also carried large white bag (folded up and stored in the chest of her Santa costume),[1] and a thin knife, skinnier than a pen and possibly designed to slip through the gaps in an armored jacket to strike a person's vitals.[13]

Maidono is experienced in the use of disguises during her missions to conceal her identity and blend into the background.[13][1] As well as altering her color sample with wigs and contact lenses, she also uses thick makeup applied in a noticeable pattern to be seen through cameras and sensors in addition to the naked eye, so that facial recognition and photo sharing cannot be used to locate her official data.[1] Making use of events with abnormal security routines (e.g. concerts, festivals, parades etc) and plenty of outsiders, she uses conspicuous costumes (such as a miniskirt santa outfit, the sort worn by a part-time worker, on Christmas Eve) which actually help her to blend into the background, allowing her to approach in plain view from the start while being overlooked and preventing people from remembering much by drawing their attention.[13][1][11] She is also experienced in diverting her opponent's attention with conspicuous actions, in a manner compared to that of a stage magician, in order to accomplish her objectives, with multiple bluffs, escape routes and recovery scenarios prepared in case her tricks are seen through.[1][11][4][2] 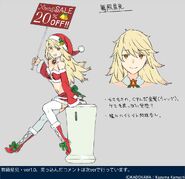 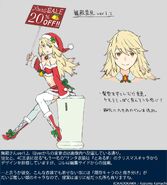 Character design by Haimura Kiyotaka
Add a photo to this gallery

Retrieved from "https://toarumajutsunoindex.fandom.com/wiki/Maidono_Hoshimi?oldid=289631"
Community content is available under CC-BY-SA unless otherwise noted.