While Touma and Aleister's group pursued the roots Coronzon placed in the United Kingdom, Mina remained in Egypt, hidden in an RV, to protect Lilith.[24][25]

After going with the RV group as they escaped in the aftermath of the battle with the Queen Britannia's sinking, Mina realized Heaven Canceller's ruse in claiming to be Allan Bennett.[26][27] Later that day, she was sulking in the RV on the outskirts of London as victory celebrations were underway. After Heaven Canceller tried to remedy the mood, she attended to the newly embodied Lilith, while explaining to him and Kihara Noukan about how William Wynn Westcott had acted as a cloud for Anna Sprengel.[27]

She is capable of exerting an influence over cats, intentionally and unintentionally, leading to a large number gathering at her feet like a shadow, the likely source of her epithet.[4][16] When the original Mina had attacked Dion Fortune, she had Fortune's house surrounded by black cats, with both regular ones and phantom black cats the size of tigers appearing, and had her back sliced open by the cats' claws.[28] 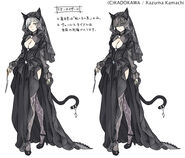 Retrieved from "https://toarumajutsunoindex.fandom.com/wiki/Mina_Mathers_(Reading_Thoth_78)?oldid=210280"
Community content is available under CC-BY-SA unless otherwise noted.