Toaru Majutsu no Index Wiki
Register
Don't have an account?
Sign In
Advertisement
in: Articles to be expanded, Characters, Science Side Characters,
and 4 more

Unknown, it is similar to Precognition and Thoughtography

Shaei is a ten-year old boy with light-colored hair and dark-colored eyes depicted as having white pupils. He wears the uniform of Matsuume Elementary School, consisting of a matching colored blazer and shorts, as well as white socks, leather shoes, a randoseru and a round hat. According to Shaei, he prefers wearing the winter uniform over his shorter summer uniform.[1]

Despite being an aloof boy that shows few emotions, Shaei is comfortable with strangers, although he often refers to acquaintances without any honorifics, much to their chagrin.[2]

Before becoming a student of Matsuume Elementary School, Shaei was a student in an unspecified primary institution. His ability was a source of ridicule among his classmates, calling it an ability that "brings misfortune", and this made him unable to make any friends at school, except for a dog named Pero.[3]

Early on, he considered his ability as a way he can protect others. However, at one instance where Shaei predicted an accident involving one of his bullies, he was unable to do anything to stop the prediction, and he was forced to transfer schools afterwards. This helplessness worsened when he foresaw an accident involving Pero.[3]

Shaei has been actively submitting his predictions on the Treasure Hunter App during the latter days of September. At this point, all six of his latest predictions have come true, including an incident on September 25 and another on September 27.[4] On his seventh, he watches over the incident from the top of a high-rise building, and he witnesses how Judgment's Shirai Kuroko and Uiharu Kazari were able to stop one of his predictions from happening. Shortly afterwards, he is confronted by Kuroko, prompting the boy to introduce himself as the creator of the Treasure Hunter App.[4]

In the Judgment headquarters in District 7, Shaei explains his involvement with the incidents uploaded to the Treasure Hunter App and his ability to predict events in the future. Shaei aims to look for someone who can help him prevent the incidents he foresees from happening, and he sees Kuroko as someone capable. However, with Kuroko unable to grasp the situation, he is met with doubt. This doubt was eventually dispelled by Shaei when he decides to use the ability in front of them, allowing for Kuroko to once more save someone's life due after the boy pinpoints the location of another accident waiting to happen. As a result of this, Kuroko and Shaei form an informal partnership that aims to locate and intercept any mishaps Shaei foresees through his ability.[2]

Shaei continues to submit his predictions to Kuroko and Kazari until his body finally broke down on the 4th of October. He is hospitalized in Heaven Canceller's Hospital, where the Frog-Faced Doctor reveals that Shaei is in a critical condition due to the excessive use of his ability.[3] Shaei manages to make a quick recovery at the appointed day of the accident involving Pero, which also happens at the day where Judgment and Anti-skill were deployed in response to two of Shaei's predictions at a park in School District 7. The predictions later unfold as bushfires caused by flammable chemicals found in the vicinity. Due to his condition, Shaei is forced to rely on Kuroko as she rescues Pero from the blaze, overturning another of his predictions and saving his only friend in the process.[5]

Shaei's unnamed ability allows him to predict events in the near future by generating photographs through an instant camera. The image produced through this method has an unrecognizable marbled pattern, which is further analyzed using a research institution's specialized equipment. The analyzed image often contains the exact moment of the incident alone, though Shaei can increase his focus and include the date and location of the incident by shining a penlight through his eyes before making a prediction. The photos generated with this "second stage" of his ability can be then analyzed by an app developed by a company for Thoughtography users in a similar way as in QR code.[2]

Any event that is predicted by Shaei's ability is known to happen at a 100% success rate, with a ten- to twenty-minute offset from the event's predicted time.[4] Shaei himself cannot prevent the incidents he predicted and it will only happen elsewhere within the timeframe of his prediction, unless someone with an ability that manipulates more than three dimensions, like Teleport that uses 11th-dimension calculations, intervenes in the predicted event.[2]

Shaei's ability detects dangerous events close to him more easily, similarly to danger sensing abilities, but it's not triggered by events under a certain level of danger like the Vento of the Front's Divine Punishment-induced comas as they didn't bring enough harm to the affected people.[2]

This prediction ability in its "second stage" is severely taxing to Shaei's own body.[2] His red blood cells are destroyed on every use of his ability, crippling his body's oxygen reserves, causing nosebleeds and nausea, and excessive use of his ability can be life-threatening.[3]

Unlike his first appearance in the Railgun manga, Shaei was initially depicted as much older than anticipated. He is designed using the concept of "an elementary school boy attending a funeral service". The camera he uses is based on the Polaroid Two, but is later changed by Haimura with the idea that the camera has the internal components of a digital printer camera and the exterior casing of a more antiquated analog instant camera.[6] 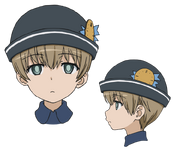