Several in the United Kingdom, but in particular Edinburgh, Scotland
New Light (, Arata naru Hikari?) is a magic organization based in the United Kingdom, which specializes in Norse-based magic. They were hired to work as couriers by the second princess of England, Carissa,[1] they later change sides at the climax of the British Halloween and are apparently still free to operate as an organization.

Just like many other groups from Scotland, New Light is a "Cabal reserve army" which by definition are not like the polished organizations known as Magic Cabals, but instead are more like "a club created from the gathering of novices who are merely interested in magic".[2]

New Light has the usual structure of a cabal reserve army, but their refinement outdoes all the others; thus it seems they are only using the cabal reserve army structure to maintain their current position.[2] New Light's headquarters are arranged in a way that allows for excellent conditions for creating spiritual tools; furthermore, the group possesses several hideouts meant to be used if their main headquarters was to be compromised.[3]

All their members wear a jacket bearing the logo of the group (N∴L∴, which represent the initials of New Light) and the symbol of a red dragon on their shirts. Their specialty is Northern European magic otherwise based off of Norse mythology.

Bayloupe pointed out that all members of New Light aim to be gorgeous girls [4] - it should be noted that this premise did influence the weapon selection and magical practices of the cabal, rejecting methods that they consider "unfeminine".

New Light specializes in magic based on Norse mythology:

Furthermore each member is in possession of a magical item exclusive to them, these are:

At the start of July in the current year of the story timeline, New Light were running a shop named Maguro Hiroi in a Russian shopping mall complex while pursuing a certain goal. As a result of Lessar giving information to Misaka Mikoto which got her into trouble, New Light became involved in a series of events which unfolded due to the schemes of the mall's higher-ups and certain parties associated with them. After the incident was resolved, New Light left by charter plane. Just before take-off, they learnt that one of their spiritual items had located the Curtana Original.[7]

Initially, it was revealed that New Light interfered with Necessarius counter measures against the terrorist hijack of a plane[8], this was done because if successful, Necessarius plan would have forced the plane to perform an emergency landing and terrorist containment efforts would have caused certain highways to be sealed off,[9] this would have hampered New Light's actual assignment.

Their task is to transport the newly-excavated Curtana Original to England using the boat Skíðblaðnir. They had encounters with Touma and the other members of Necessarius while he was staying in London. Bayloupe was caught by Itsuwa in one of Necessarius's labyrinths[4], Floris was easily defeated by Kanzaki Kaori[3], Lancis didn't fight and remained outside of the area[1] (her part on the mission required her to be 30km outside the combat area) and the last one, Lessar, decided to go after Touma once the revolution was done and is assisted him in fending off Fiamma while harboring the desire of recruiting him so that he works for England.[10]

It should be noted that once Queen Elizard used Union Jack and scattered Curtana's power, Bayloupe and the rest of New Light unanimously decided to lend their help to the efforts of stopping and saving Carissa,[11] all of this despite the shame that the act of switching sides might bring upon them.

Lessar and Lancis are seen at New Light's apartment in Edinburgh discussing the news that Bayloupe intercepted from the Anglicans about Touma's mysterious return to Academy City with the aid off the leader of Dawn-Colored Sunlight Leivinia Birdway. Lessar then rants that she was trying to seduce him for the sake of England, before striping off her clothes to reveal a dominatrix suit underneath. Lancis then shows her photo intercepted from the Anglicans showing Kamijou Touma standing in the center of a number of people after reading the annotations left by the Anglicans (the notes identifying the girls around them and their breast sizes) and declares that it is the time for Lancis' major debut and to put on a white Japanese school swimsuit and head to Academy City for the purpose of seducing Touma, to which she replies, warning Lessar that one more word and she will punch her.[12]

Lessar mentions that she and the rest of New Light played rock-paper-scissors on who will get the plane ticket to Japan and see Kamijou Touma on their upcoming counterattack against GREMLIN. Lessar states that she won the plane ticket after beating Floris who cried during the final match.[13]

While only Lessar's movements were shown during the Crowley's Hazard invasion of the United Kingdom and the emergence of the reproduced Golden Dawn,[14] New Light was referred to as one of the later iterations of the Golden Dawn.[15][16] 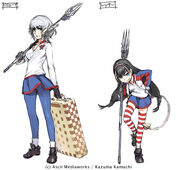 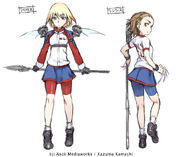 Floris and Lancis (left to right).