As the daughter of Oyafune Monaka, one of the members of the Academy City Board of Directors, her very existence is a leash the people from the Dark Side of Academy City use on her mother. A good-looking woman, she is a woman who is obsessed with beauty.

Like her mother, Suama's given name (素甘) is based on a pastry, the sweet mochi cake.

She is a tall woman with black hair, which is described as looking as hard as metal. She has sharp eyes that are covered by inverted triangle glasses that are probably of some expensive brand. She wears a branded white suit and skirt, and wears beige (or sometimes dark-colored) stockings over her legs.[1] She wears makeup and has drawn eyebrows as part of her facial ensemble.[2] She wears high-heeled shoes.[3]

She is a woman who is obsessed with beauty. This is because she understands that being beautiful gives her advantages. The primary reason she has with this attitude of hers is that she was a person who was the disadvantage for not being beautiful. Suama's theory was that you may not be able to be “the best of the best” or even “among the best” through hard work alone, but you could at least be “"better than most". And as “better than most", you could get a taste of the blessings of beauty. And she was proven right, as her class listens to her, the other teachers didn’t look down on her, and people gave up their seat for her in the cafeteria. Because of this she takes good care of her body to make herself beautiful, seemingly to the point of obsession. She refines her body in and out by taking multiple baths a day, putting lotion on her face before going to bed, eating breakfast every day, keeping her weight down so it didn’t affect her skin, spending over an hour in the morning putting makeup on, and spending large amounts of money buying Western clothes from magazines and the internet. When school comes to an end, she gets very worried that her makeup and drawn eyebrows come off from her sweat. Moreover, even if she is worried regarding those things, she is also not supposed to show any outward signs, as she knows that one's attitude and mood were an important part of being beautiful.[2]

Because of this she is somewhat interested on how Tsukuyomi Komoe keeps her youthful appearance,[2] and panics if she gets dirtied. She even packs an extra pair of stockings with her in the event something bad happens to the one she is wearing.[4]

Regardless, Suama is still a proper teacher and disciplines unruly students, as what happens towards Kamijou Touma, Tsuchimikado Motoharu, Aogami Pierce, and Fukiyose Seiri.[1] She also apparently cares for her mother, knitting a scarf for her, though she isn't good at it.[5]

Suama was apparently not as beautiful as she is now, putting her in a disadvantage. She later learns the advantages of being beautiful and endeavored to better herself.[2]

Some time in the past, her life was threatened via using a picture of her with a handgun delivered to her mother by a pro-military export faction in the Board of Directors headed by Shiokishi in order to coerce her mother to stop her efforts in preventing their efforts. From then on, her mother stepped down from negotiations, and has lived while not touching the darkness of this city, but limit their actions inside the darkness without them knowing by working on areas outside their attention.[6]

After she discovered Touma, Tsuchimikado Motoharu, Aogami Pierce and Fukiyose Seiri fighting were sent to the teachers lounge after a scuffle was discovered by a teacher at the school. The issue was about the three boys talking about which color would suit the bunny girl better (black, white or red), but Fukiyose with her own brand of justice, chokes Motoharu, kicks Aogami and headbutts Touma.[1] After summoning Saigo to put them in their place, she orders the four to pick the weeds off the school grounds.[7]

In the faculty room, she meets with Tsukuyomi Komoe doing her lesson plan as well as that of Yomikawa Aiho's who was too busy with her Anti-Skill duties. Here, she is enamored by her youthful skin and wonders how Komoe did it. Then, Komoe apologizes for her students' behavior and asks her what happened to them.[2] Realizing she forgot about them and the time getting late, she excuses herself to check on them. There, she finds Touma and Seiri playing fork ball (with Aogami and Motoharu having already skipped out) when they accidentally hit Suama and Touma goes to apologize but the angry Suama tries to strike Touma but she misses and he then asks if he can go home but she whips something at him prompting him to run away.[3]

She then rushes to back to the staff room while she is rushing to get the dirt off herself and her clothes she starts to strip them off only for Touma to walk in on her, in response she began throwing math tools at him until he flees down the stairs.[4]

Acqua of the Back ArcEdit

She is in the faculty room as Komoe's class begins to starve due to lack of lunch. Here, as Touma pleads his case to open the culinary classroom, she is shown eating a deluxe seafood donburi with sea urchin and roe, and along with the lunch of her fellow teachers, has Touma leaving with in. irritation.[8]

As Shiokishi prepares for the eventual attack of GROUP and Oyafune Monaka, Sugitani suggests to make Suama as hostage, but Shiokishi disagrees as it will only work on Monaka and not on GROUP, and decides not to split up his forces just so he can take hostages.[9]

Appearing only rarely, Suama's design remains static throughout the series. Haimura designed her to look like a science teacher or bio researcher. 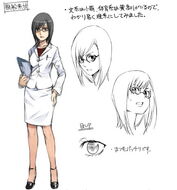 Close-up of Oyafune Suama's face.
Add a photo to this gallery

Retrieved from "https://toarumajutsunoindex.fandom.com/wiki/Oyafune_Suama?oldid=202969"
Community content is available under CC-BY-SA unless otherwise noted.