The Palace of Westminster was one of the various sites seized by the Knights of England during Carissa's coup d'état attempt.[1]

The Palace of Westminster was the site of Kamijou Touma and Aleister Crowley's initial encounter with Orsola Aquinas when she was fused with Isis-Demeter.[2] Not long afterwards, Holegres Mirates was launched into the face of Big Ben from Trafalgar Square by Accelerator.[3] 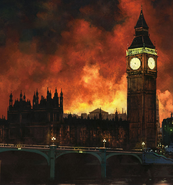 Retrieved from "https://toarumajutsunoindex.fandom.com/wiki/Palace_of_Westminster?oldid=176638"
Community content is available under CC-BY-SA unless otherwise noted.