Toaru Majutsu no Index Wiki
Register
Don't have an account?
Sign In
Advertisement
in: Characters, Science Side Characters, Unnamed Characters

Use of machine tool to make water jets

She is a girl that wears a dark colored playboy bunny suit. This showed off her sensual body lines, however, her sex appeal was countered by a paper bag worn over her head.

On her back was a tank of water that she wore like a backpack, which connected to a hose and at the end had a nozzle attached to a pipe that looked like a naginata.[1]

As a "hero" under the effects of Agitate Halation she has the demeanor of being determined in saving Fremea Seivelun, to the point that she would harm others who get in her way even if they are not a threat to Fremea. She is particularly vicious, saying to Touma that people who help other people without them asking for help are hopeless of would like to "slice them in two like a samurai."[1]

She is described during the summons of the Agitate Halation as a "weapon that had no one to protect yet would still destroy any an enemy that fit the proper parameters." During this, she shows no concern for any sort of rational towards her actions ("she doesn't care"), and need only listen to the voiceless voice (the influence of Agitate Halation).[1]

She first appears after Fremea Seivelun desired for someone to help her, after she escapes the battle between Rensa and Kuroyoru Umidori. Kamijou Touma, who was heading towards Fremea Seivelun herself after coming upon reports of the Agitate Halation Arc, comes upon her after she attacks him. She is completely unhinged before him, not making any sense, and utterly vicious with her water tank and nozzle that can propel water from it. Not knowing if its an advanced technology or an esper ability of hers, Touma becomes extremely anxious around her, along with the fact that she is strange and unpredictable.[1]

As soon as she tries to attack Touma with her water jet, she is blown away by the sound blasting ability of the very loud Fusou Ayame and her trucks. Ayame as well, is influenced by Agitate Halation, and sees Bunny Girl as a threat to Fremea. Bunny Girls slices down one of her large trucks, and the both of them attack.As the battle continues, Touma is bewildered by the spectacle. As he questions the strange effects of the Agitate Halation on people, a cellphone lands next to him containing information regarding Fremea. Although Touma is suspicious of its convenient arrival, he eventually uses the information on the cellphone to track Fremea.[1] Surviving her ordeal with Ayame, Bunny Girl arrives just in time to find Fremea breaking into the Learning Core, unter the instructions of Beetle 05 (whose powers were under the control of Rensa), however, before she can deal out her brand of "saving her," Fremea is urged to continue as several other "heroes" come rushing in.[2]

She is not seen afterwards, though it is presumed she continued to riot along with the other heroes in Learning Core until Fremea took control of Agitate Halation herself.

Bunny Girl uses a machine tool, though it is unknown if any esper power is used along with it, as even Touma is unable to determine it. The machine tool apparently has the ability to manipulate the water that is propelled by her naginata-looking nozzle machine tool into a water jet that has been shown to slice steel at least from 10 meters away, like the water jets used to cut steel sheets in factories need a gigantic machine to cut the steel. Along with this, it is as least shown that she apparently has the ability to accurately slice a bunch of objects, manipulate the water to form an even larger object, and have the knowledge and quick-wittedness to create the machine in the first place, like a three meter long crossbow, a ballista, made of debris.[2]

According to Haimura, she apparently had a poor design as he did not have a good grasp of her character. He made his rough for her design before it was decided that she would not appear in any of the illustrations. He hopes that he can redesign her when she shows up again. 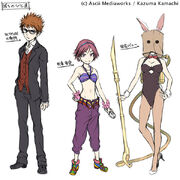 The rejected Bunny Girl design to the right, alongside a disguised Tsuchimikado Motoharu (left), and a preliminary design of Fusou Ayame (center).