The Professor (博士, Hakase?) (real name unknown) is a character introduced in Toaru Majutsu no Index. An elderly man, he is the leader of MEMBER, an underworld organization that answers to the Academy City Board of Directors and Aleister Crowley directly.

With the height of 160 centimeters, the Professor is a short elderly man, though is described as middle-aged..[1] He wears business attire, a shirt with tie, under his lab coat. He wears rectangular spectacles. His most notable feature is his long hair that stands up on its ends.

Outside of the warehouse where the Mimosa are attacking Kakine, Yoshio comments on the accurate information the higher-ups provided regarding Kakine's location. This prompts the Professor to say that that is the power of the upper classes, as such it is impossible to run away in Academy City since it is their territory. The Professor then begins eating a fruit as he tells Yoshio on how he became attached to formulas because art brought him despair when he was 12 years old. Afterwards as he looked on his watch, he deemed that the Mimosa has already eliminated Kakine. He tells Yoshio that they should not reclaim the Tweezers and that the other members of SCHOOL should have already been taken out. Though in thought, he worries about killing a Level 5 but reassures himself that Aleister can just make another one. Yoshio asks about Saraku, to which Professor, apparently knowing that Accelerator referred to him as Kill Point, confirms that he is still alive as Accelerator struck him with none fatal wounds. Here, he asks Yoshio to retrieve him when he has the time. However, Yoshio doesn't respond as there was a loud explosion, inadvertently dispersing the Mimosa and making it useless. There, the Professor discovers that Kakine Teitoku is alive and without a single scratch on his person. Kakine has overheard the Professor's short story of his life, to which the Professor tries to attack him using the Mimosa but discovers that they have been dispersed too much bu the explosion. At his wit's end, Kakine tells the Professor that "It’s about time you had another dose of despair." Kakine presumably kills him afterwards, though in what manner is unknown.[1] 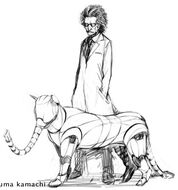 Professor's anime character design for Toaru Majutsu no Index III.
Add a photo to this gallery

Retrieved from "https://toarumajutsunoindex.fandom.com/wiki/Professor?oldid=212436"
Community content is available under CC-BY-SA unless otherwise noted.