Rensa (恋査, Rensa?) is the name given to the cyborg which was created for the emergency event when all Level 5 Espers would rebel against Academy City, in which case she would suppress them by using their abilities or copying other espers' abilities. Being only cyborg body, small parts of a person's brain can be inserted into the cyborg in order for them to "pilot" it. There are 40 recorded individuals who were willing to have their brains reduced to a very small portion in order to control Rensa in turns. Only #028 and #029 amongst them were shown in action.

The cyborg was created apparently at the recommendation of Yakumi Hisako who had presented a thesis to the Academy City Board of Directors about the hypothetical event of the Level 5s opposing them.[1] This situation actually has a precedent that can back its claim for a countermeasure against all Level 5s as exemplified with Misaka Mikoto destroying research facilities during the Level 6 Shift, the Original Kakine Teitoku and his faction SCHOOL opposing MEMBER, a faction that takes orders from the Board of Directors, as well as Accelerator who defied Academy City at the end of the Third World War.

The Board of Directors deemed the apparent threat and price of implementation of the countermeasure was worth it, as the adults of the city were running several projects that made them feel guilty but produced such massive benefits to be worth it, so they viewed the children of Academy City as a threat because their minds were still developing and they acted based on emotions rather than what benefited themselves.[2]

According to Rensa #029, the reason why Hisako chose a cyborg instead of an esper began with the failed Radio Noise Project. As a clone had the exact same physical body yet at the same time functioned as a distinct human being, it became more independent of itself, or as Rensa #29, "one of the great mysteries of life is the fact that life forms gain the role of the master when they are created." This fact apparently gets in the way of acting as a pure slave in order to become an output point for esper powers. However, despite this, and Rensa #029's comment of the "pilots" not waning individuality, the Rensa cyborg still have some relative freedom in her actions, and can still act quite human and even have the capability of changing who can "pilot" the cyborg, as with the case of Rensa #28 and #29, who have a very apparent differences of personality between them.[2]

Seemingly with approval, Yakumi Hisako was somehow able to acquire money from the City in order to fund the construction of Rensa. The total cost of a production of a single Rensa is very expensive, taking up a huge chunk of the total assets of Academy City and the maintenance costs forced Hisako to make deals directly with the dark side of Academy City.[2]

As for its pilots, if Rensa #029's anecdote is to be believed, the pilots are apparently taken by Hisako from a difficult situation, in which they are either grateful or willing enough to have their hypothalamus removed from their body for use as the Rensa's operator.[3] The Rensa pilots' hypothalamus are kept in storage in Hisako's hospital when not operating the cyborg.[4] According to Rensa #029, if a hypothalamus that is used for the cyborg Rensa can't be used anymore, they are reused as calculation guidance parts for the Sniper Bee.[2]

All Rensas have the same general appearance, what makes them different from each other is the way their personalities affect their actions and appearances. The Rensa cyborg has long dark hair and purple eyes. The color of her exterior or skin is set in the color of soft flesh as camouflage to blend into human society. This camouflage skin gives an impression that it looks like a skintight wet suit if set on the default colors, the metallic purplish-red and pink. However, this default does not apply to her head, neck, wrists, hands, and thighs.[5] Although the cyborg can choose not to wear clothes due to her camouflage skin, the Rensa's standard attire is that of a backless pink nurse uniform, which implies that Rensa's occupation when not doing missions is to act as the nurse in Hisako's hospital. The obvious utility of the backless uniform is to allow the mechanical flower from inside Rensa's to be released without ripping her clothes.

For reasons unknown and even in her explanation as a "top priority issue," Hisako apparently had set the bust size of the Rensa cyborg at 80.999 centimeters.[6]

As a cyborg built to counter every Level 5, it is only natural for Rensa to have a strong ability to be able to defeat them. Specifically, by default, she can freely switch between the powers of 1st-ranked Level 5, Accelerator, up to the 6th-ranked one, though she is unable to reproduce the power of Sogiita Gunha's power due to it being unexplainable. According to Rensa #028 however, she is confident that he can be defeated with brute force using the other powers of the Level 5s. Moreover, the cyborg can reproduce and switch into other espers' powers within a 200 meter radius from her.[5]

She can do this through the folded AIM receptor that is kept inside of her, and can be called on her discretion. The AIM receptor looks like a giant metallic red flower accompanied by countless silver metal rods that looked like the flower’s stamen and pistil. It comes out of her back. When expanded, it only takes a mere 0.7 seconds for her to start changing into another ability,[1] this time frame likely applies to her absorbing new esper abilities as well, not just the default group of powers of the Level 5s she has already. The machinery that allows her to switch between powers is described as "knitting needles," which precisely control the values that which allow her to use other esper's powers. By altering the wiring of her body similar to pulling the strings of a puppet, she is able to reproduce the characteristics of multiple people and therefore switch between multiple abilities.[5] Despite her ability supposedly only able to create output points for esper powers, Rensa #028 was able to reproduce Imagine Breaker to a certain extent.

She is seemingly a perfect matrimony between macro engineering that brought about FIVE_Over, and micro quantum mechanics that brought about Personal Reality, the source for an esper's power. Like Kuroyoru Umidori's Bomber Lance, the cyborg acts as the output point of an esper's powers. While Umidori's powers could be produced from a mechanical arm identical to her Umidori’s arm, then a mechanical arm created based on an analysis of Accelerator or Kakine Teitoku’s bodies should be able to function as an output point for their powers. The cyborg's body rearranges the makeup of the mechanical body, allowing for her to reproduce, seemingly, any number of output points for any esper ability.[5]

The cyborg has shown that she is able to remotely access the Bank, and can use facial recognition to instantaneously search for information, giving her a great advantage in a fight.[7] Although she has a physical body, which equates to normal strength, she can instead use her "mechanical body" as Rensa #028 put it, which is strong enough to lift someone like Kamijou Touma one handed by the neck.[8] Extending to this, the pilot has absolute control of all physical aspects of the body, like expressions and voice, allowing her to look and sound expressionless if she chose.[2]

Despite being a cyborg, her body is still remarkably that of a human, as she had been designed to function as an output point to remotely draw out the abilities of powerful espers. That meant her body’s structure would likely be extremely similar to that of a human. If she was decapitated or stabbed through the heart, she would die. If she had the same structure only made with different materials, her joints could be dislocated just like with a normal human.[5] Her cyborg body also disallows her from using extremely powerful magnetism.[8]

Unlike Multi-Skill, Rensa cannot use two powers at once, and even if a switching only requires 0.7 seconds it is always the same and an opponent can still take advantage of this delay, as with the case with Rensa #028's fight with Kamijou Touma.[8] Moreover, as Rensa does not need "talent" to use the powers of the Level 5, its effectiveness is dependent on the one who "pilots" the Rensa body. This is pointed out by Touma to Rensa #028, telling her that she may have the powers of the Level 5s, but she is not a Level 5 herself.[8] This is backed up by Rensa #029 who states that Rensa #028 was logical-thinking and only used projectile attacks unlike her which has markedly different style of using her powers.[9]

According to Haimura Kiyotaka, the design for Rensa #28 did not need individuality for story purposes, as such he designed her as such. The design for Rensa #29 receives a distinction separate from its predecessor. According to Haimura, he designed her with the basic image of Envy from Fullmetal Alchemist fame in mind. Despite having the same proportions, Rensa #29 is a lot more boyish.[10]

Finally, continuing with the plant motif that is apparent in some of Haimura's art such as Aleister Crowley's Blasting Rod, he had designed Rensa's AIM receptor design with the thought of combining a cosmos flower and a parabolic antenna.[10] 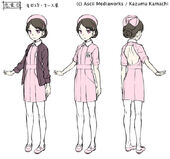