Runes (ルーン文字, Rūn Moji?) are the letters in a set of related alphabets known as runic alphabets, which were used to write various Germanic languages before the adoption of the Latin alphabet. In the world of Toaru Majutsu no Index, the alphabet is used in various magic spells and rituals, known as Rune Magic (ルーン魔術, Rūn Majutsu?), the most notable being that of Stiyl Magnus and his Rune cards.

According to the Index Librorum Prohibitorum, the common twenty-four runic characters are used to indicate mysteries and secrets (Rune means "secret") and have been used as a magic language by Germanic tribes since the 2nd century and are found in the roots of Old English.[1]

There is not just one type of runes. Just like most languages, they have changed day by day depending on the era or the location. The standard number of runes is 24 but some sets use 16 and some places use 33.[2] For example, the United Kingdom has a 33 character style.[3] There are also a number of secondary runes derived from the 24 characters making up the basic Futhark, though these are said to be just literary additions developed later to make texts easier to read and are subsequently treated as having no occult value.[4]

The trick to runes is that a single rune can have many different meanings. These different meanings can be drawn out in various situations, with an individual rune or a combination of runes, in order to form different bases and cast different spells.[3] Different types of runes also produce different effects, and if a new derived branch of runes with a distinctive deviation were discovered, such as the ones found on the Alaskan Epitaph, it could potentially enable a whole new set of spells to be used.[2]

Various mediums can be used to create and use runes; as well as being carved or written in ink or chalk on surfaces or paper, they can also be formed using ice crystals,[5] water[6] and blood.[7] Vitamin B2 sprays and industrial laser carvings have also been used, although these methods have been deemed to violate the treaty between Magic and Science.[3][4]

Multiple copies of a rune can be used in order to bolster the power and effects of a runic spell, however proper runes are said to hold the greatest power when the most suitable letter is used for the location and situation, so in clashes of rune magic, quantity doesn't hold an edge over quality.[7]

When a magician uses rune magic, they typically tend to follow a common series of steps; first, they decide what effects they want, then chose the most suitable runes for it and the location best suited to draw out the effects. They then carve the runes and initiate the magic, sometimes offering a prayer to the gods ruling over the runes used, before checking on the effects. Once finished, they would then end the effects by destroying the carved runes.[8]

Because runes are written characters, if one can read them, they can figure out the meanings being drawn out and thus the effects of the spell they are being used for. Additionally, if they can affect the rune itself, they can interfere with the rune magic or terminate it by erasing the rune.[9]

A Rune card or Runic card (ルーンカード, Rūn no Kādo?) is a magical tool that has the runic language printed on them. Primarily used by Stiyl Magnus, it is shown to perform various types of spells depending on the runes used and the numbers of cards used. When used however, the magician is required to continuously provide mana for the cards to operate, for example: Stiyl leaves runes in the hall near Touma's room which would summon Innocentius when an intruder comes near. However, because of this, magicians can easily track the mana left by magicians.[10]

According to Stiyl, he has analyzed all of the 24 standard runes and has created new power using six character runes. It is unknown what these new six runes are at the moment.[11]

The content of the card consists of a Magic Circle, formed by four circles encasing a pentagram with a rune mark in the middle of it. The outermost circle is colored yellow, the second outermost is darker yellow-colored perhaps orange (the first novel features this) where there are five crosses that jut out of the five points of the pentagram, the third is a thick black line, and the final circle is colored red. Here, the pentagram is lined black, with the insides colored white. The black rune(s) is inserted in the middle of the pentagram.

The cards are also laminated, so water cannot damage the printed material on the card.[11]

Rune data is often preserved on stone epitaphs, which are usually erected out in the middle of plains or on hills in Scandinavian countries, such as Denmark, Finland and Sweden.[2][4] These carelessly erected monuments include what could be called the world's most generally neglected grimoires.[2] Due to being exposed in the middle of plains and hills, they are worn away daily by acid rain and natural processes. This isn't a problem with original grimoires, which cannot be completely destroyed and will naturally restore themselves over time,[2][4] however other monuments without magical protection will be worn away and their runes lost. As the original grimoires are the ones seen as having true magical value, the other epitaphs are generally left unprotected.[4]

Most rune slates are from the plains of Scandinavia, though there are exceptions, such as the epitaph found in Alaska[2] and the stones on Uphill Island.[12]

Among the various forms of magical knowledge that the Norse god Odin is said to have acquired through sacrifices and ceremonies, the most famous are the means of using 18 varieties of runes. Most of these have clear effects like stopping the movement of a flying arrow or checking if a cup has poison in it, however there is one which no one save Odin is said to know the purpose of or the method of using. The Final Rune (最後のルーン, Saigo no Rūn?), though said to be known only to Odin, is based on runes which can be used by humans and gods alike, so if one could learn how, they would be able to use it and the magic which became the source of Odin's power. The rune is a key part in completing and empowering Gungnir.[13]

The Final Rune is similar to other runes in that it is composed of a set of straight lines.[8] However, though it is a single rune, it produces an effect similar to a grimoire, which is made up of a few hundred pages filled with characters. A glance at a sample on a small wooden board used as reference material caused mental contamination near the level of an original grimoire and the true completed one would definitely be on that level, enough to shatter the mind on being seen.[8][14]

The Final Rune is not something which is carved onto a person or object to raise one's abilities, nor is it something which is seen visually. Instead, it is carved onto the world itself in order to greatly change it. It is intended to be carved onto the core of the planet; being unable to find a way to interfere with this area is partly why the Norse people considered it only usable by Odin himself. Even if someone was able to carve the rune meant for Odin, it would take weeks for them to finish and even automatic writing spiritual items would take days.[14] According to Brunhild Eiktobel, who was carving the rune using a remote automatic writing method derived from the Cape of Good Hope and several other places, creating regularity in the flow of the liquid outer core to carve it on the solid inner core like a river wearing away at the earth, the straight lines making up the rune weren't too difficult but the dying of the grooves was very complex.[8][14]

Once the rune is complete, it will blend into its surroundings, making it impossible for anyone to find it, even for expert magicians. Furthermore, the completed rune would be virtually impossible to destroy, being on the level of a pure original grimoire. The completed Final Rune would rearrange the world so that all of its spiritual and magical powers would be gathered in the spear of Gungnir, granting the wielder an inexhaustible supply of power.[14]

Aside from interfering with the carving method, it is possible to destroy the Final Rune before its completion by destroying Gungnir, which it is linked to.[15]

The rune card is used by Stiyl Magnus as a replacement for the print paper marked with runes he originally used, after failing spectacularly against Kamijou Touma, who washed the ink of the runes off the print paper with the emergency sprinkler system of his dormitory.[16] Stiyl has been using the cards ever since.

This is a list of known runic spells and the runes used for them. For the spells used by Stiyl Magnus with his rune cards, the type of spell created is dependent on the runes printed on the cards and the power depends on the number of cards used.[16][17] 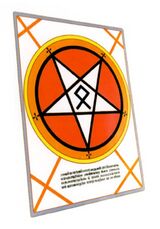 A Rune card from the back of the dust jacket from Volume 1.

Early design of the runic markings and the card by Haimura Kiyotaka for Volume 1.

Rune cards and characteristics from Toaru Majutsu no Index Manga.
Add a photo to this gallery

Retrieved from "https://toarumajutsunoindex.fandom.com/wiki/Runes?oldid=264528"
Community content is available under CC-BY-SA unless otherwise noted.