Imaginary Fest
Sakuragi Naruha (作楽木ナルハ, Sakuragi Naruha?),[1] known as Naru (ナル, Naru?) to her comrades, is a character introduced in Toaru Kagaku no Accelerator. She is a powerful esper that allows her to manipulate paper and is a member of Scavenger.

Naru is a young girl with purple hair[2] (depicted as having pinkish hair in Toaru Kagaku no Railgun T anime), that wears a variation of a maid and bunny costume, with thigh-high socks, detached cuffs, a maid headband, and a bunny tail at the back. Including her shoes, socks, and the umbrella she carries, the entirety of her costume is made of paper somehow made wearable by her powers.

Her costume made of paper has two variations: the first being short-sleeved and having skimpy shorts while the second one are long-sleeved and has a skirt instead. She can intetchange between those two variations of her costume using her powers.[3] Her hair is shoulder length, and below her left eye is a tattoo of a skull.

She is shown to be one of the more childish members of the group. She is described by one of her teammates that she has never seen Naru praise someone.[4] Like all members of Scavenger, she does her job of killing people and destroying things without remorse or guilt, willing to eliminate those who get in the way. Moreover, she also hates teachers and believes them to be the source of evil in the city.[5]

She also seems unconcerned with being exposed, as shown when she dons her "paper powered armor" that exposes much of her torso with only small pieces of paper covering her private parts.[4] She has no reluctance baring her skin in front of others but she is not an exhibitionist.[6]

Naru didn't originally believe in occult things like horoscopes. However, she started believing in them after she received an extremely negative horoscope in the same week as Scavenger's defeat by Accelerator.[7]

They are later seen again razing the entirety of DA's headquarters in sector 3's warehouse district, apparently killing many people in the process. Naru is overjoyed that their job is done despite the fact some members of DA has still gotten away from them, believing that the job is over once their target location has been destroyed. Seike tells her that the place they destroyed wasn't the only targets and notes a mysterious body-bag with a girl inside it that DA took with them. They later track the surviving DA down using the Predator ability.[9]

Later showing their disregard for their targets and people who get in their way, they destroy a small contingent of Anti-Skill they meet along their way. Naru later taunts the Anti-Skill that tried to contact them and later unanimously agree to finish their job as quickly as possible.[10] They arrive in great force with Naru using her ability on paper explains as bombs against both DA (and their Tarantula mobile weapon) and the Anti-Skill that were fighting near a tunnel.[11] With both their hosts weakened, Naru is in the sidelines watching Seike stop the Tarantula in its tracks as it tried to flee. They all get on top of the downed machine where they find Esther Rosenthal and Hitokawa Hasami save Misaka 10046, the girl in the body bag.[12]

Sensing the threat they pose, Hasami attacks and separates Naru from the group. Despite the increased strength and speed of the Huotou, Naru is unscathed thanks to her skills and ability. After Yomikawa Aiho arrives to aid Esther and Hasami, they reject the Scavengers' offer to give Misaka 10046 to them in exchange for their safety. The Scavengers later decide to kill them all with Naru being the one wanting to do the deed.[4]

Naru then creates a "battle armor" modeled after a bunny. Before she can engage them, she's interrupted by DA's Tarantula's pilot, who leaves his machine and tries to shoot them. She blocks his bullets with her paper and criticizes Seike for not making sure she had killed him earlier. After Ya and her finish him off, Naru once again prepares for battle. Using her armor she easily beats Yomikawa, breaking her shield and sending her flying with a single punch, but she's stopped by Hasami when she tries to finish her with a stomp.[5] Naru holds the initial advantage in the fight, as she uses her control of paper to restore the armor as Hasami damages

it and to skewer her with several paper darts. However, once again her attempt to finish the enemy with a stomp is interrupted, this time by Esther improving Hasami's battle capabilities using a Gnome to manipulate earth. Because she keeps failing to destroy the earth armor with her suit and hammer, Naru receives her leader's advise to use an excavator to dig the armor and kill Hasami.[13] Despite the increased power, Naru is unable to hit Hasami, as she is now slower than before now that she was using the excavator. Nevertheless, Naru follows her leader's orders and targets the weaker Esther, forcing Hasami to block her excavator to protect her master. Just before she can kill the two, Accelerator appears and destroys the excavator.[14]
After initially being overwhelmed by his appearance and having to save her leader from being crushed by the Tarantula's remains, Naru collaborates with her teammates for Scavenger's combination attack, using her paper to create an iron maiden to trap Accelerator and contain Ya's liquid thermite reaction after her leader had tracked Accel

using her Predator power and Seike had immobilized him by removing friction around him. Naru was also the one to throw Seike at Accelerator and Ya's sphere into her iron maiden. However, to the horror of all Scavengers, Accelerator easily survives the attack. When Esther mentions Accelerator's name, the four girls finally realize who they are dealing with.[15] Accelerator proceeds to easily defeat them one by one, taking out Naru by creating earth spears and piercing her bunny suit when she carelessly attacks him in a rage after he had taken out Seike.[16]

Naru apologises, since they were supposed to retrieve the doppelgänger alive. However, the doppelgänger gets back up. Naru tells the others to stand back so she can crush her again, but the doppelgänger demonstrates a new ability and steals Naru's paper armour. Naru is knocked out and the doppelgänger turns to Yakumaru. However, Naru wakes up in time to save Yakumaru, and together they manage to escape with Leader.[7][20]

Afterwards, Naru borrows Yakumaru's shirt. However, they then encounter Misaka Mikoto, who has already defeated Seike. Leader tries to persuade Mikoto to work with them. Yakumaru catches on to her plan but Naru nearly gives them away, so Yakumaru gags her.[7][21]

Leaders sends Naru and Yakumaru to pick up the unconscious Seike. Naru worries over leaving Leader alone with a Level 5.[22][21] Leader then calls them and orders them to evacuate the Skill Outs from an area that they are planning to redirect the doppelgänger to. Naru suggests just blowing them away, but Yakumaru instead tricks them into thinking that there's a poison gas leak. However, Naru becomes enraged and plans to beat up whoever hurt her "Ya-kun", having also fallen for the trick.[23][21]

All of Scavenger (including the now-conscious Seike) gathers at a warehouse to meet their client. The doppelgänger breaks in, something that Leader uses to coerce the client into signing off on their job. Naru then constructs a sledded vehicle which the group use to escape.[23][21]

However, Leader has the group assist Mikoto against the doppelgänger. The real Ryouko falls from the sky and Mikoto is unable to save her, so Naru and Seike head up in a small plane to save her instead.[24] Naru asks what they should do with her and Seike says to send her to their client.[25]

With Scavenger's help, Mikoto defeats the doppelgänger. Afterwards, there is a confrontation that results in Ryouko being shot. In the manga, Naru and Seike fly in to take her to hospital.[26] In the anime, they were about to go to Mikoto's current location as per Leader's instructions, but Mikoto prevented them from doing so and instead tells Leader to only contact the hospital. Kuroko aids Mikoto on sending Ryouko and the doppelganger to the hospital instead.[27]

After the incident is over, Naru takes part in a meeting where they discuss how to improve the team. She proposes that they recruit a fifth member who fits the colour yellow, so that they are more like a sentai team. Seike jokingly suggests taking this further by making their clothes out of Naru's power so that they can transform. Naru takes this seriously and tries to strip him. Seike uses his power to avoid her attempts, but Naru sets up a trap on the door that lets her catch him. She succeeds in stripping him, but Seike then takes revenge on her. The group then receives a call from their liaison. Leader convinces the liaison to return their rank to normal, causing the others to high-five each other in celebration.[3]

Naru and the rest of Scavenger participate in a jailbreak trial, a competition to test the defences of a private juvenile hall by breaking out a fake prisoner. After they get past the exterior wall of the juvenile hall, Leader orders Yakumaru to follow and secretly support Mikoto, who is also competing. As Leader explains, it's possible to win the trial by stealing the prisoner from another group, and Mikoto has good odds of getting the prisoner if she has Yakumaru's support. The rest of them hide by the exit.[28]

While waiting, Leader is worried about what Mikoto will think of them after they steal the prisoner. Naru asks Seike what she's worried about and Seike suggests that she's thinking of how to spend the prize money. Later on, they hear an announcement that the trial is over and are shocked.[29]

Naru's ability, Perfect Paper (, Shinshi Nenriki (Pāfekuto Pēpā)?, lit. "Immersed Paper Psychokinesis"),[1] is a variant of Psychokinesis which allows her to be able to freely manipulate paper into various forms and shapes. The properties of the papers she uses change as well to have the flexibility of cloth and the strength of hardened alloy - while ranked as a Level 3 when combined with her combat ability she has the skill of a Level 4.[13][6] She can use it as bombs,[11] cushions, clothes, an armor,[4] shields, spears,[5] darts, hammers, and even an excavator that Naru names Excavator Version.[13] Creating an object as complex as the excavator requires a lot of focus and reduces Naru's speed.

Naru can construct a range of vehicles out of paper, such as a sled or small plane, which are used by Scavenger for transport.[23][24][21]

She is also quite skilled in close quarters combat, able to dodge and counter the much more physically powerful Hitokawa Hasami, the Huotou.[4] 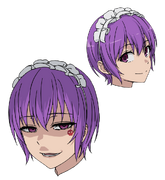 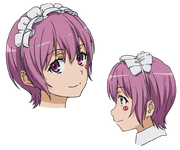