Sakurai Jun (桜井純, Sakurai Jun?) is an anime-original character who debuted in the Silent Party Arc of the Toaru Kagaku no Railgun S anime series. Sakurai is the only female member of STUDY.

Jun is a girl who, like her fellow members from STUDY, wears a pair of glasses. She has short brown hair styled in a bowl cut, with long fringes that cover her eyebrows. She wears uniform consisting of a green blazer worn over a white dress shirt, a red necktie, and a plaid skirt.

Sakurai, not unlike the other members of STUDY, so far only seems to care about showing Academy City their power (which is actually STUDY's desire to show that it is possible to create artificial Espers, albeit it was considered a mere hypothesis, even by the likes of Therestina Kihara Lifeline). One unique trait she doesn't share with her colleagues is that she wasn't shown pushing her glasses in moments of confidence, suggesting that she is a calmer character amongst her more haughty associates. However, she may become hysterical when faced with a critical situation that is out of her control.

Of all Haruki's colleagues, Jun seems to be closest to him, adding a -kun honorific to his family name.

A specialist in the field of molecular biology,[1] Jun entered Academy City Research Exhibition Assembly like Aritomi Haruki. She later becomes disillusioned by the City's focus on esper powers, and joins up with Haruki for the Chemicaloid Project to show the city a different method in creating espers. She joins Haruki in presenting their pet project to underground organizations, and later bear witness to Kihara Gensei mocking their project alongside Haruki. She later joins up with his STUDY Corporation and continued to the project on their own without the support of other underground organizations.[2]

Like most of the members of STUDY, Jun often stays inside the main headquarters, contributing to the smooth progress of their leader Aritomi Haruki's plans. For the most part of her appearances, she is silent. When needed to agree upon the next action, she would promptly raise her hand to support that action without any complaints.

During the day of the Silent Party, Jun joins Haruki and Sekimura Hirotada in the main console room as they handle the plan from inside while their two other associates are deployed in one of four key venues in the Academic Assembly to counterattack against the forces of Judgment assigned there. Later, she explains to Misaka Mikoto, who subdues Aritomi before trying to shoot himself in the midst of his plan's failure, the "last resort" Aritomi activated out of desperation during the confrontation with Mikoto.[3]

It is implied that she joined Aritomi and the other associates of STUDY as they were taken into custody for their crimes. 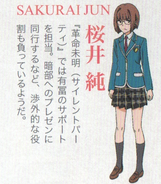 Sakurai Jun's character profile for the Railgun S anime from the seventh BD/DVD booklet.
Add a photo to this gallery

Retrieved from "https://toarumajutsunoindex.fandom.com/wiki/Sakurai_Jun?oldid=283735"
Community content is available under CC-BY-SA unless otherwise noted.